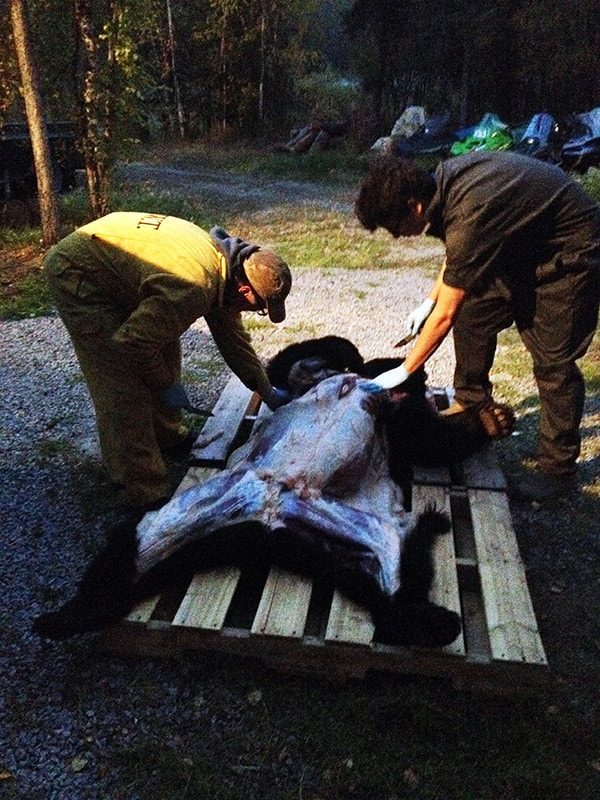 A few years ago I drove to Fort Providence with my neighbour to learn how to make a traditional Dene drum. I’ve been on the hunt for bear grease ever since. Last night, after a bear was shot and killed at the same neighbour’s house on Ingraham Trail, I got my wish.

To condition the drum – made of elk hide because caribou are so scarce – our teacher, Laura, provided us with a small tub of bear grease to rub into the skin to prevent it from drying and cracking. The grease was nearly translucent and buttery smooth; it had none of the gamey, pungent smell I’d been expecting.

If anything, it wafted faint hints of meadow and crystal clear water, and so did my hands – which four days later retained a youthful, silky feel. I knew I was onto something good.

But try to find bear grease these days. It’s hard. Even as black bears seem to be ascending on Yellowknife to meet untimely deaths – the latest being one with an injured paw shot in a backyard on Borden Drive last week – their ursine gifts are abandoned.

Not so long ago, people would clamour to skin and harvest such a bounty, but those skills, and that interest, have waned. When a wildlife officer shoots a bear today, it usually ends up at the dump.

Saved from the dump

Which was where Big Black, his lifeless body still warm, was headed last night, until I begged my husband that we intervene. This massive, seemingly healthy male bear had been terrifyingly persistent in his attempts to tear into my neighbour’s house.

Since Sunday night, he’d ripped every screen on every door and window. Wildlife officers, armed with a bear trap, made repeated trips out to her house, but each time they were present, the bear wasn’t – until eventually, officer and bear looked one another in the eye and the latter took a bullet. Even though it was a crack shot, the animal’s aggression did not end, and it took another. It was after his death they discovered that Big Black, as her husband called him, had climbed a ladder, disturbing solar panels along the way and tearing off shingles while atop their roof.

When my neighbour called, somewhat breathless and obviously rattled, to relay a précis version of this tale, I learned the officer was just leaving with the bear’s body in his truck.

My husband Francois works with NWT trappers to help sustain traditional, land-based pursuits and he is handy with a skinning knife. He’d also just commented on the wastefulness of bears being taken to the dump, and how he’d like to skin one out and use it as a teaching tool at his work.

“Please can we try to get this bear, I really need the grease,” I asked him (my drum is drying, and I don’t feel canola oil is up for the task).

He knew the officer, called him, and within minutes the bear’s hulking, limp form was slithering off the truck onto wooden pallets to be skinned at our house. I was in awe of his shiny grandeur. Francois, our son Calvin and I all donned coveralls and got to work.

I held the bear’s front paws, identical in size to my giant hands, and occasionally held his feet, splaying his body so father and son could sever the connective tissue that attached hide to fat.

My only attempt at the task resulted immediately in cutting the fur, but I noted with pride that Calvin, who aspires to become a chef and knows his way around a carcass, was immediately adept.

Skinning a bear is back-breaking work. It took three of us 90 minutes. I was not horrified or sickened by the bear’s inner workings, although I did scream once.

While I was holding upright a back leg easily the length of a NBA centre’s, the knee buckled, pulling me down as if the bear had suddenly come back to life. There is much truth that a black bear without its fur looks like a large man.

His back and bum were covered in a thick layer of whitish-yellow fat that we sliced off and placed in a bucket. Now what?

I called a friend versed in such matters and she told me to remove any specs of meat or net-like coverings around the fat, then slow-simmer it for many hours, skimming off what rises to the top, until the fat melts into a near-clear oil. Then pour it through cheesecloth and process in clean mason jars.

A quick call to her Mom, who I know as Setsuné (Grandmother in Denesuline), confirmed that the fat, if kept cold, will wait until I have time for it. I will savour the task.

During the years I have been searching for bear grease I have been told that it helps treat dandruff, balding, eczema, acne and dry skin, that it is great for cooking and baking – and conditioning drum skins.

We hauled the carcass, teaming with rich red meat, onto the back of our truck. For some cultures and some people (Francois being one of them), bears are too much like humans to eat.

Sadly, the remains of the bear were destined, still, for the dump. But then my friend said she’d like a hind quarter, then another friend said he’d like the backstrap and a hind quarter…and so tonight, Calvin will butcher the meat and we will distribute it. And perhaps what’s left will then be light enough to pack off into the bush, where it will fatten up the wolves for winter.

My neighbour will need time to come to terms with her terrifying experience with this insistent intruder. I know him only as the peaceful bear who made my wish come true. When I’ve rendered his fat into grease, I will give her some for her drum.