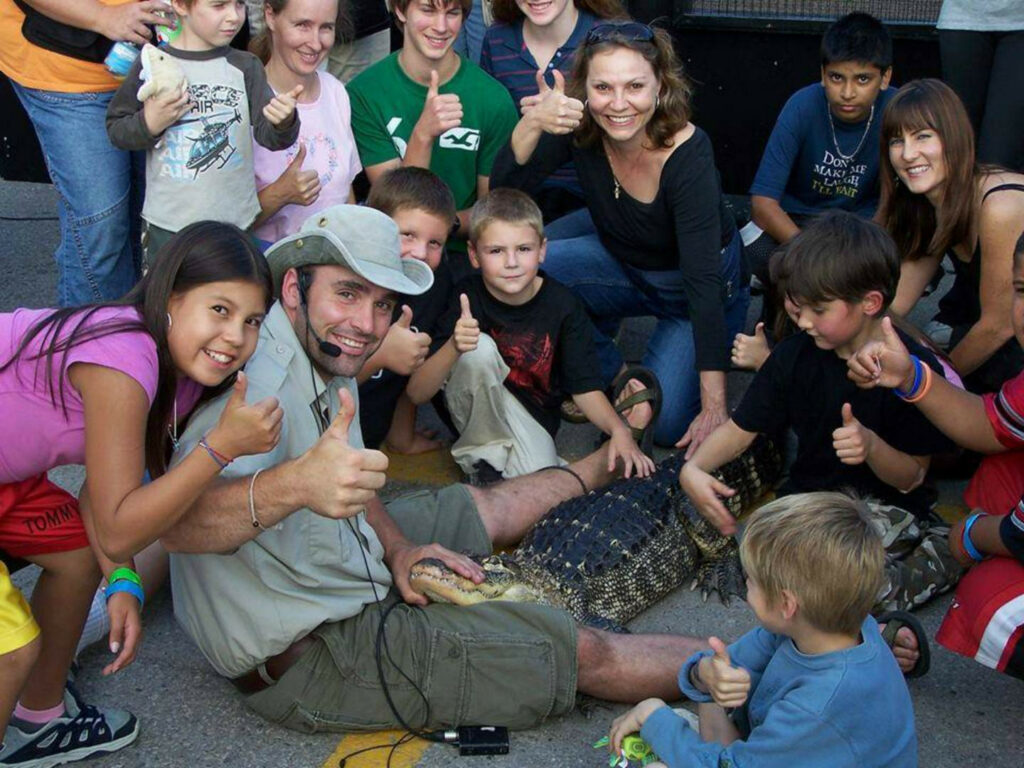 Paul Goulet, better known as Little Ray, started his lifelong love affair with critters and crawlers as a kid growing up in Yellowknife. There was fishing near the pump house, and hunting trips with his dad, Big Ray. If you knew where to look, a hike out to Cameron Falls could yield plenty of spiders.

“My father travelled a lot for [the department of] Sports and Recreation,” says Goulet, who now runs one of Canada’s largest reptile petting zoos, Little Ray’s Reptile Zoo, which has four locations across the country and does educational tours throughout North America. “I was in the outdoors all the time, and loved everything from spiders up to caribou… I was constantly out in the bush learning about animals, birds and fish.”

“Of course people can hold the python!… Well, actually, he’s pretty hard to hold, but you can touch him.”

For the dinosaur-obsessed kid there weren’t enough reptiles plodding or slithering around. But there was a trip to the San Diego Zoo.

“I remember touching a boa constrictor there, and that’s when I began to associate modern reptiles with dinosaurs,” says Goulet. “There weren’t any reptiles in the North, so they were super exotic for me.”

This week, 36 years after leaving Yellowknife for Ontario as a 10-year-old, Goulet’s coming back to town with a sizable retinue of reptiles in tow: a 12-foot python, a monitor lizard (cousin of the Komodo Dragon), a turtle, and even an alligator named Peanut. He and his 12 creatures will be in the Ed Jeske Arena in the Multiplex from Friday to Sunday, doing shows, lessons, and interactive sessions. (He’ll also be in Hay River, where he was actually born before his family moved to Yellowknife, on Wednesday, July 6, at the Soaring Eagle Friendship Centre.)

“Of course people can hold the python!… Well, actually, he’s pretty hard to hold, but you can touch him,” says Goulet.

For those more interested in the reptiles of yore, he’ll be bringing up “museum-quality” replicas of a T-Rex skull and an eight-foot long triceratops skull.

The animals and the faux-fossils will be transported up by staff in Saskatchewan in a massive van specially equipped with transport cages for the animals — in other words, if you see an overturned van on the side of the road between Fort Providence and Behchoko, it might not be a good place to stop: snakes in the grass could have a whole different meaning.

Although he hasn’t been back since 1980 — “I’m ashamed to say” — Goulet says he’s thrilled to be visiting his childhood home and bringing the joy of reptiles to Northern kids.

“I’ve got to find my old house. I can see the house perfectly, I’m going to knock on the front door, and say hey, I grew up here can I visit? Hopefully they won’t chase me off with a gun!”

As for whether he’s keen to encounter any of the critters that inspired him as a kid: “If I see anything up there I’d be happy. Maybe Saturday night I’ll go fishing. I’d be happy just to stand on the shore by the pump house and cast a couple of red spoons.”