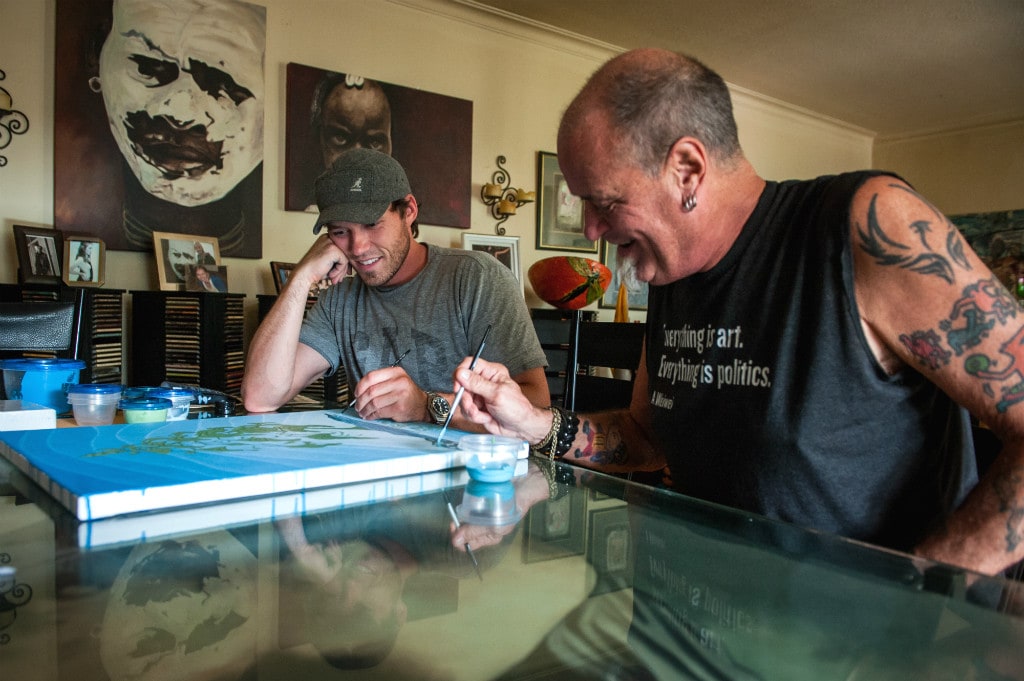 In a Toronto apartment, with Tom Thomson’s portrait reflecting off the glass table where they sat, Yellowknife artist Robbie Craig and a descendant of the iconic Canadian painter shared a moment, and a paintbrush, together last summer.

Greg Thomson, the great-great nephew of the fabled Thomas John Thomson – who inspired the artists who eventually formed the Group of 7 before his mysterious death in 1917 – discovered Craig’s Northern Projects website and became a fan. Last May, he contacted him on Facebook to say he liked his work.

“His stuff reminded me of an Aboriginal Lawren Harris,” says Thomson. “I loved  his style of painting and the way he interpreted landscapes and told him so. I then mentioned my connection to Tom and it kind of went from there.”

Like so many Canadian artists, Craig, who teaches phys-ed in Behchoko, and paints stylistic northern scenes from his kitchen studio in Yellowknife, says he’s been influenced by Tom Thomson and the Group of 7.

This past summer, he suggested he and Greg Thomson go for coffee while he was back in Ontario visiting at his family farm. Former Yellowknife photographer Dave Brosha was holding a workshop at the farm, and that’s where Craig met photographer Paul Nelson.

“I told Paul I was going to go meet Greg Thomson. I said, ‘I’m going to put him on the spot and I’m going to ask him if he’ll paint with me’ and Paul said, ‘what!’ He asked if I’d mind if he came along and took photographs, and I said sure.”

The pair met Thomson at a Second Cup in Toronto. Craig describes him as a “super tall, 58-year-old with a shaved head, earrings and covered in tattoos.” They hit it off and went back to Thomson’s apartment, where the poet and collector of music and “spooky art” was surprised when Craig pulled out his paints and asked if he’d mind working on a tree with him.

“He kind of laughed and said ‘I’m not much of a painter.’ He wasn’t quite happy with what he did, and I told him I’d never sell the painting or make prints of it,” says Craig.

“I have absolutely no artistic talent, as Robbie can attest,” says Thomson. “He even had to fix up my signature.”

Craig also gave him several of his own prints as a gift and then Thomson showed him an old family photo of himself as a child with his father Ian, his grandfather George, and his great-grandfather George, who was Tom Thomson’s oldest sibling. A lawyer who took up painting in 1906, George Thomson became a renowned artist of his time, and was the first family member to arrive at Canoe Lake in Algonquin Park after receiving news that his brother had gone fishing, and his canoe returned within hours, empty. Tom Thomson’s body surfaced more than a week later, but his death, and the movements of the art he left behind, have remained a mystery for almost a century.

Craig says he was told George Thomson went through all of his brother’s paintings and decided what’s good, what wasn’t, and burned the rest. In the last few years, Tom Thomson paintings have fetched more than a million dollars at auction.

“I have six or seven of George’s paintings here, and I laid them out on a bed and I told Robbie to pick one out,” says Thomson. “He chose one and my only stipulation was that he can’t ever sell it. We have about 30 or 40 between my sis and I, and our grandfather and father told us we were never allowed to sell them.

“Quite frankly, he painted those later in life – he lived to be about 95 – and they’re not the best stuff he’s ever done. I knew from the brief time we spent together that Robbie would treasure it, and it meant so much to him. I never give any away but sometimes art picks the person and it certainly picked him.”

Craig chose a painting called “A Placid Scene” which reminded him of his family cottage.

He’ says he’s soaking up the art network that’s growing around him thanks to social media.

“Besides going to a museum or getting books, how do you connect yourself to some of these iconic painters?” he says. “It’s all kind of wild.”