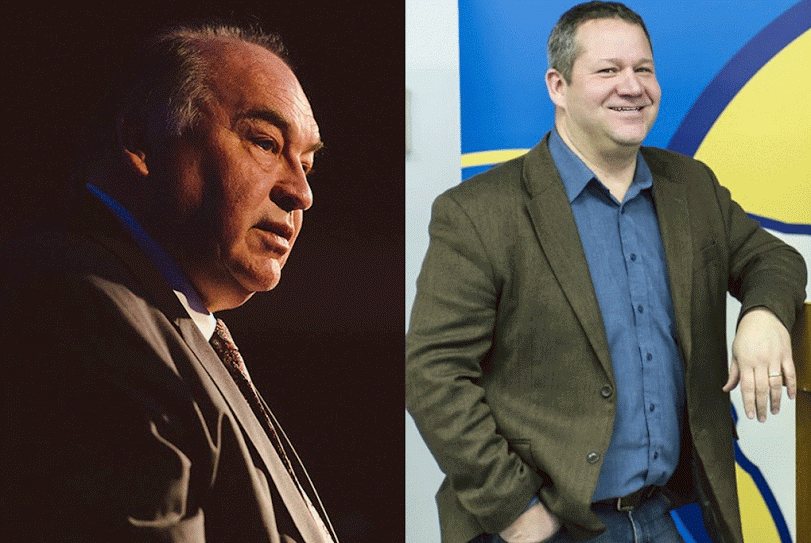 When Bob McLeod stood up in the assembly to announce his second run at the NWT’s premiership yesterday afternoon, he could well have taken a page out of the Stephen Harper playbook: economic times are tough, the outlook for the mining sector is grim; stick with me, your experienced, no-nonsense shepherd.

However, the Harper playbook’s looking a little ragged right now – because, you know, #it’s2015 (as that soaring bit of Canadian oratory goes) – and McLeod chose to focus on change.

“People also want change. That was a very clear message we all heard during the election campaign and one I am committed to honouring.”

He proposed a number of new ideas: creating a minister for transparency and democratic engagement, annual cabinet meetings in each region, working closer with regular members on new joint committees on climate change and family violence. Though publicly recasting himself as an agent of change is going to take some extremely creative contortionism; for most, he’s the face of a status quo that was roundly rejected on election night – with the dramatic ejection of two of his chief lieutenants, David Ramsay and Michael Miltenberger, and the downfall of many of his cross-aisle colleagues.

Glen Abernethy, his only competitor for the premier’s chair, picked up on this and drilled at it continuously throughout his own speech, which preceded McLeod’s: “The results of the election were a clear signal… We need to do things in a different way. The status quo is no longer acceptable.”

He even pulled out a Facebook-friendly quote, citing Einstein’s “Insanity is defined as doing the same thing over and over again and expecting different results.” (Did Einstein really say this? Or was it Benjamin Franklin? Or neither?)

There’s no doubt Abernethy, though a key minister in the last administration, is better positioned to ride the wave of change than McLeod. If there is a clique of newcomer reformers taking shape in the 18th assembly, he’s probably their man. But neither candidate has a clear upper hand, with each benefitting from different forces.

This week’s mini-election period will likely play to Abernethy’s favour: it gives time for MLAs to, in theory at least, chat with their (change-minded) constituents and watch the inevitable online outrage at the prospect of a reborn ancien regime. Last week’s closure of Snap Lake also can’t help McLeod’s cause, even though he and his team are hardly responsible for it.

But McLeod has two potential advantages – he’s Metis, in an assembly where the majority of members are Indigenous, and, though he’s a Yellowknife MLA, he has community roots, in Fort Providence. This latter point in particular should not be underestimated. Despite strong rumours that Jackson Lafferty and Tom Beaulieu would represent the north and south in the premiership contest, neither stepped up, which leaves the smaller communities without a direct stake in the territory’s highest office. McLeod’s Fort Providence origins will serve him well here, especially as the unwritten order of things suggest that it’s the south’s turn at having a premier (before McLeod, the north’s Floyd Roland held the post).

As Julie Green put it: “I think people associate [McLeod] with Fort Providence. Having a second Yellowknife premier, but originally from Fort Providence, that might make the deal easier to do.”

And let’s not underestimate the clout of McLeod’s experience. With so many freshmen MLAs being sworn in at a time of increasing economic uncertainty, members may well look for McLeod for stability.

Horses are still being traded

Giving the race for premiership a more public face than usual – before, would-be premiers spoke the same day voting took place – may change the dynamics of the contest, at least on the surface. But ultimately, it’s still essentially a backroom game of horse trading: I’ll support you for premier if you give my riding this or support me running for that position on cabinet.

Case in point: “I have my own mandate that I established with my constituents, and [I’ll decide who to vote for after] seeing who can best service that mandate,” said Kieron Testart. “I made it very clear to the public, to the press and to my constituents that my support for premier is tied to support for my platform commitments.”

Some MLAs might be swayed, in part, by the desire of their constituents, and may genuinely seek their input, though the manner in which they will do so is still unclear. Meanwhile, MLAs from outside Yellowknife are unlikely to have enough time to get home to consult their constituents directly before the vote.

There’s a hard week of bargaining ahead. If I was a betting man, I’d say, for all the talk of change, neither Abernethy and McLeod has better odds than heads or tails.