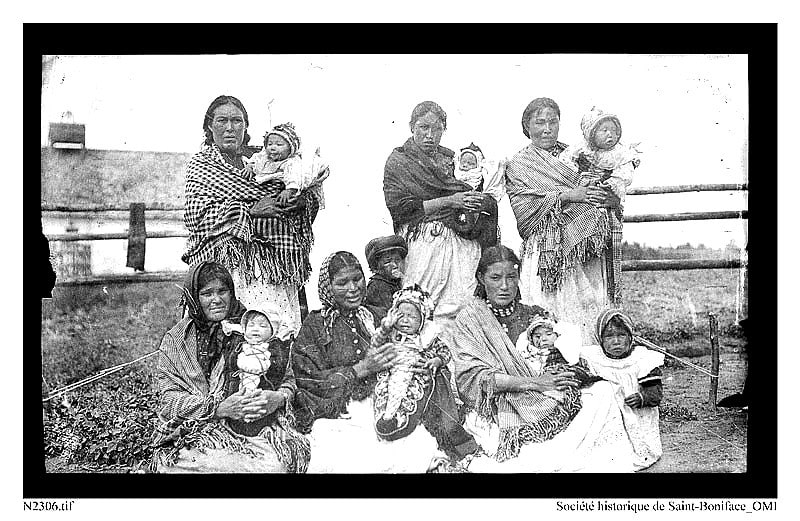 La Loche in 1914: Mothers with babies in moss bags in front of a tent with the old church in the background

I’m sure Scott Gilmore thought he was helping when he penned this piece for Maclean’s in the wake of the unfathomably sad shooting in La Loche, Saskatchewan, last week. Having tried nothing and run out of ideas, he throws up his hands and suggests it’s time to “help” people move out of remote Northern communities to southern Canadian cities, where they can be “integrated into one of the world’s healthiest, safest, most rewarding societies.”

It is true that communities across the territories and the provincial north have far too much experience with internalized violence, that rates of suicide and violent crime are higher out here in the hinterland. It is, I suppose, admirable that a writer comfortably embedded in the Ottawa power elite (his wife is federal environment minister Catherine McKenna) is appalled at the human cost of the privation that stalks many small communities far away from metropolitan Canada.

But what Gilmore proposes as a last-ditch solution to this complicated knot of problems — that people should leave, that we should actively encourage people to relocate to southern cities — is a terrible idea.

“If we really want to end the violence and deprivation that plagues Canada’s remote Aboriginal communities,” he writes, “we need to help them leave these communities, forever.”

His piece, wretched as it may be, is worth quoting at length:

“We can dig past the poor governance and inadequate services. We can go deeper, into the injustices of the Indian Act. Or even further down to the establishment of the reserves and the deprivations of the missionaries. And still, the roots don’t end there. You can keep going until eventually you have stop in exhaustion and admit the north itself is violent and has been forever.

In other words, forget the violence of colonialism. It’s you and where you live. To save this village we must destroy it. There have been more than a few attempts at relocating Indigenous populations in order to grease the wheels of federal administration. They are now considered spectacular injustices.

If place didn’t matter, these nations wouldn’t have spent the better part of a century fighting for self-determination.

I’m not sure on what grounds Gilmore decides that the Indian Act, reservations, residential schools and missionaries don’t cut it as root causes for the issues that so many Indigenous communities face. If the argument is that violence plagued Indigenous people before colonization, that’s not much of an insight. It is true of literally every human civilization that has ever existed.

First, this ignores what numerous Indigenous leaders have been telling us for a while now: that communities are in fact desperately in need of more culturally relevant counselling and treatment. On-reserve education is notably under-funded as are child welfare services.

“Why do we keep pretending that somehow we can make the reserve system, and communities like La Loche, work?” Gilmore asks. “That this time, with a little more money and a little more empathy, we can end the culture of isolation, despair and violence that has plagued Canada’s remote north since before there was a Canada?”

It’s popular to say that more money won’t fix the problem. But how can we say that if Canada has never funded these services properly?

And why sniff at the benefit of new roads? The Sahtu is currently pleading for one. No one would suggest they’re a cure-all, but they do allow people to leave their communities without having to move away. “Our families should be able to take their children out and go out and compete within their area of expertise, which is sports and music and arts,” Ethel Blondin-Andrew told the CBC recently. “They don’t have the opportunity if they have a large family because airline costs are so prohibitive.”

Then there’s this: “It could be political correctness: we are afraid of sparking more moral outrage from Aboriginal Canadians and their supporters. Or perhaps the idea of dismantling the 140-year-old Indian Act seems too daunting. Or it could be just a naive romanticism that believes Aboriginal people should never be separated from what Jacques Cartier described presciently as ‘the land that God gave Cain.’”

Local circumstances vary of course (another point Gilmore misses), but broadly speaking, Indigenous communities want treaties honoured, traditional sovereignty recognized and/or self-government agreements concluded. Why? So that those communities can have control over what happens on their land. That’s naive? If place didn’t matter, these nations wouldn’t have spent the better part of a century fighting for self-determination.

And that’s what makes Gilmore’s piece so infuriatingly tone-deaf: it proposes a simplistic solution that is totally at odds with the direction things are actually moving. Deline, for example, negotiated with the federal and territorial governments for 18 years to win local control over health and social services, among other responsibilities.

“If you associate the issues and the problems that we have today with all of the possibilities (from self government), people start to realize that this can work,” negotiator Danny Gaudet said when the agreement was ratified. Will it work? We may not know for a while, but it seems better than moving everyone to the suburbs.

Finally, it’s not as if everything is terrible in the Hinterland. No rational person would deny the very real problems that exist. But amid the trauma and heartache you’ll find welcoming people, laughter, ingenuity and the determination to make home a better place. Gilmore would have us throw up our hands and quit. He may mean well, but that isn’t even remotely helpful.