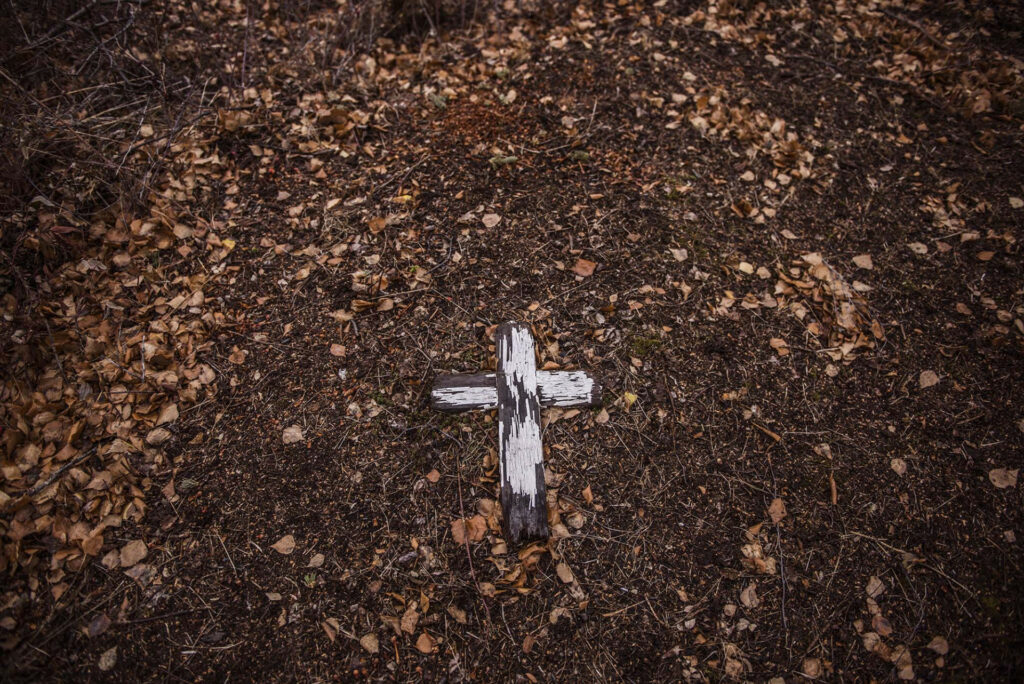 Each spring, Yellowknife Scouts slosh through the mushy ravine behind the Ski Club in search of dead bodies. Not the recently deceased kind; they’re on the hunt for femurs, vertebrae – and maybe skulls – of Yellowknife’s earliest pioneers. It sounds gruesome, but it’s not unusual for the Back Bay Cemetery to cough up bones in the spring thaw, scrounged by wily foxes or revealed by erosion from Jackfish Creek.

I nearly stumbled over a leg bone on the trail leading to the cemetery; closer inspection revealed a caribou hoof dangling off one end.

“They didn’t bury people six feet down back in the day,” said scout leader Mike Kalnay, who also runs the True North Rotary Club’s annual clean up of the cemetery.

With bones cropping up, picket fences falling over and wooden crosses scattered across a mat of wet leaves, there’s little doubt the cemetery needs more tender love and care. The Rotary Club’s done a commendable job cutting brush and erecting signs, but the registered heritage site is crying out for some City money.

The issue was brought up at the Heritage Committee meeting last week, and Councillor Adrian Bell, who sits on the committee, said he’d try to get funding into the City’s upcoming budget. There was even a suggestion the remains should be moved to Lakeview Cemetery while preserving the site for heritage reasons.

“We’re not jumping at the gun to go around and dig up bones,” said Dave Hurley, the Facilities Manager with the Department of Community services. But the site certainly needs upkeep, he said.

The challenge is getting equipment to the cemetery. In the winter, you can ski-doo across Back Bay – but who wants to hammer crosses into place at 40 below? The rest of the year you arrive by narrow trails haunted by coyote dens. You could take the little-known City path that runs along the ridge above the cemetery, just on the other side of the Niven developments, but then you’re clambering down cliffs near where the ice caves form. When the City workers get to the site, said Hurley, they have to be careful and respectful. “It’s not like digging up your yard and moving things.”

After all, it is the resting place of at least 35 people. Research has identified 27 to 35 graves. The Yellowknives Dene used the site before settlers arrived in the 1930s, so archaeologists suspect there may be many more.

The first recorded burial happened in the mid- to late-30s, though the name and year are disputed.

The newspaper of day, The Prospector, reported in September of 1938 that Art McIntyre’s was the first-ever funeral held in Yellowknife.

A 1988 City Heritage Committee report written by Ben Nind claims a different name and and date of 1936 while outlining circumstances worthy of a Robert Service poem. “John McEchern was a labourer at Negus Mine who disappeared after supper one night…the townspeople scoured the surrounding area for the young man. They found his body by Long Lake with a note by his side stating that he would rather die than face his fear of working underground. He had slashed his wrists with a razor.

“The townspeople gathered at the Wildcat Café. A dogsled coffin carriage led a somber procession across the Back Bay ice to a sandy site where a grave had been blasted out.”

The City report has since been called into question, partly because Negus wasn’t operating in 1936. Whoever the first person buried was, he was followed by dozens of Yellowknife’s pioneers until 1946 when people began to be buried at the Lakeview Cemetery.

With a gurgling creek and birch trees growing between hand-painted crosses, it’s a breathtakingly beautiful place – one, we can only hope, gets the attention it desperately needs.

Want to see more of the Back Bay Cemetery? Watch James MacKenzie‘s video below:

On needing a Number 77 fix: words of a Noodle House junkie