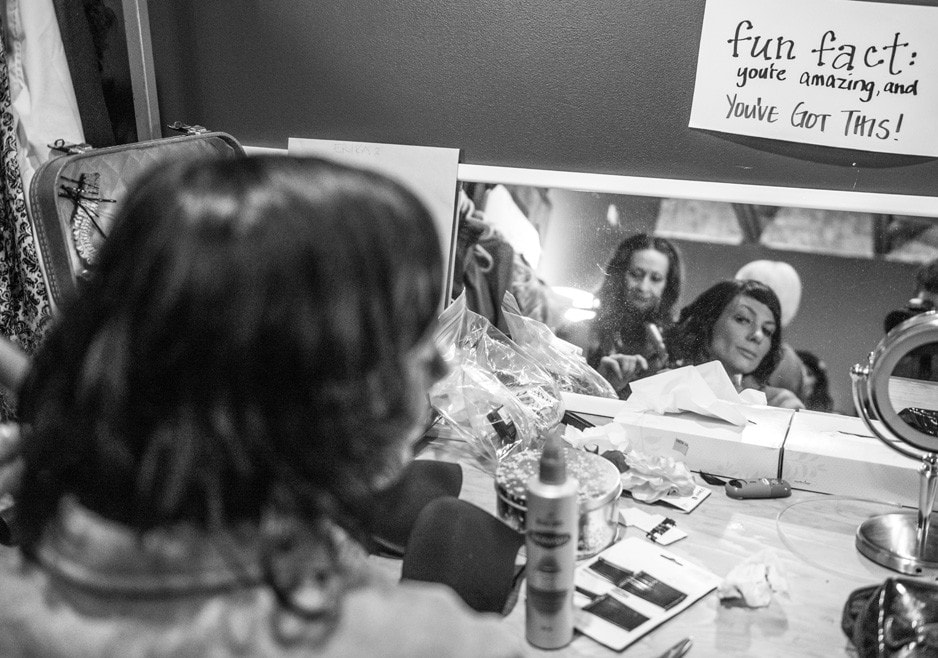 story and photos by Pat Kane

Gracey Finass gives a coy wink and smile to a hooting, whistling crowd before strutting off-stage. It’s here where Gracey turns back into Erika Nyyssonen, director of Brrrlesque, the mid-winter variety show ticketed as “The Hottest Show in Town!”

Backstage, Nyyssonen is all business as she helps with last-minute costume adjustments, directs traffic, answers questions and nudges stagehands along. As the next act is introduced, a nervous performer turns to a sign on the wall that reads, “Smile, Breathe, Enjoy.” A moment later, her chin pops up, her smile widens and she heads on stage. Nyyssonen pauses, looks up and smiles wide herself knowing that the performer, like the rest of them, is going to send the crowd into an absolute frenzy.

Brrrlesque, now in its third year, was originally pieced together in 2009 for the launch of a ‘zine called Do It Up, published by Yellowknife residents Jennifer Knowlan and Krystal Thompson. “Our Love & Sex issue was being released and Krystal suggested we do a burlesque show,” says Knowlan. “With no funding and three months to launch date, we got rolling! It was a bit disorganized at first, but the performers were amazing and it all came together.”

A year later, Nyssonen and close friend, Camilla MacEachern (who both performed in Knowlan and Thompson’s show) decided to build on the experience. The result was the first Brrrlesque event at the Top Knight Pub in April 2010. “To be honest, aside from some event-planning skills and enthusiasm we had no clue what producing a show would entail,” MacEachern says. “We went in pretty much blind and relied on our performers and friends as resources.”

From the start, Brrrlesque was a hit with Yellowknifers, with each show selling out in less than 10 minutes. In fact, if there’s a thorn in the show’s side, it might be that it’s too popular and many people can’t see it. “Ticket sales are our least favourite part of the show,” MacEachern says. “People comment about how great it must feel that our show is so popular that it sells out in minutes. Yes, it is flattering, but I mostly feel sad we can’t accommodate everyone.”

When asked why these women make such sacrifices to put on Brrrlesque, MacEachern replies with a nice soundbite: “Life begins at the end of your comfort zone,” she says. “Everyone has their own inspiring reasons for pushing their own limits – and blood pressure. The show on stage is amazing, but the experience behind the scenes is truly magical.”