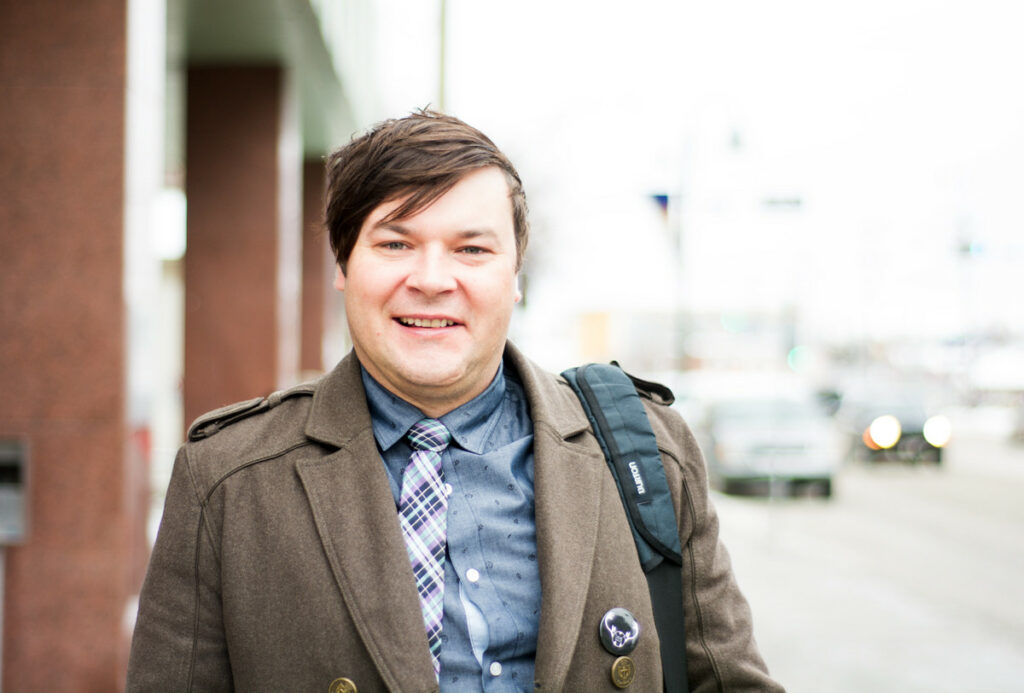 The Yellowknife architect who’s challenging Glen Abernethy in the Great Slave riding says he’s running because the government isn’t listening to the public.

“From what I’m hearing from people, the current government … hasn’t really been working with [people],” says 38-year-old Chris Clarke. “They have to jump through hoops to get anything done or to have any word from the government. And that’s just not right.”

Clarke, who’s Yellowknife Chipewyan from the Lutsel K’e Dene First Nation, was born in Hay River and grew up in Pine Point, Yellowknife and Fort Smith. He holds degrees in environmental science and architecture from the University of Calgary. After finishing school, he worked for private architectural firms in Toronto before returning North to work, first for the NWT Housing Corporation and now for Health and Social Services, where he’s involved in designing health centres and public housing around the territory, including parts of the new Stanton Hospital.

“As an architect, I’m used to working with complex problems and a vast number of people, and organizing and leading those people… [And] I worked for the government so I understand how government processes work. That gives me a good understanding of what needs to change within the government itself and how things are run.”

“This place has always been expensive, it’s been expensive all my life,” he says. “I go away to school and come home and it’s even more expensive. I understand there’s inflation and what not. But it’s very obvious the government isn’t reducing the cost of living for people here and that’s something that’s maddening to me.”

He suggests reviewing the toll structure on the Deh Cho bridge to see how much food prices are being driven up due to trucking companies passing on the cost of tolls to consumers. Cost of living could also be reduced, he says, if we diversify our energy sources — adding a combination of solar, biomass, wind and geothermal energy production — in both in the diesel and hydro communities.

“Look at the hydro communities now. Because we don’t have a diversification of energy sources, we are very much brought to our knees by things like droughts that we’re having right now. We’re not getting enough energy from the hydro dams so now we’re having to burn fossil fuels.”

“There was a log cutting business, I think it was in Fort Smith… for lumber, but they didn’t have a kiln which you need to make the lumber dimensionally stable… Places like the Housing Corp could have bought the wood, but didn’t because it’s not dimensionally stable because it dries and then cracks. Why couldn’t they get a kiln there? I’m sure we spend a lot of government money on a lot of things that are less important.”

He also wants to see more investment in fisheries and agriculture, though he admits more research needs to be done to see if we can produce food in a cost-effective manner. One part of switching to renewable sources of energy, he says, is the possibility that greenhouses could be powered for much cheaper, bringing down the cost of agricultural production.

Clarke says more can and should be done to integrate senior care and childcare, perhaps using combined facilities, as he says happens in several European countries.

“You’re giving something to the elders to do… and that’s the point at which languages can be taught. Because of colonialism we lost our languages, and it’s going to need to be taught by elders… You get an education in a Northern and Aboriginal way by combining those two cohorts, and I think you also learn respect for elders and respect for a lot of things in life, and I think that’s going to help with the justice system and lowering crime and violence.”

He also suggests establishing a travel grant program to help young people in particular get out of the communities and experience the broader world.

“We need our youth to experience these different things because we need them to have that world knowledge to help us run this place when they’re older.”