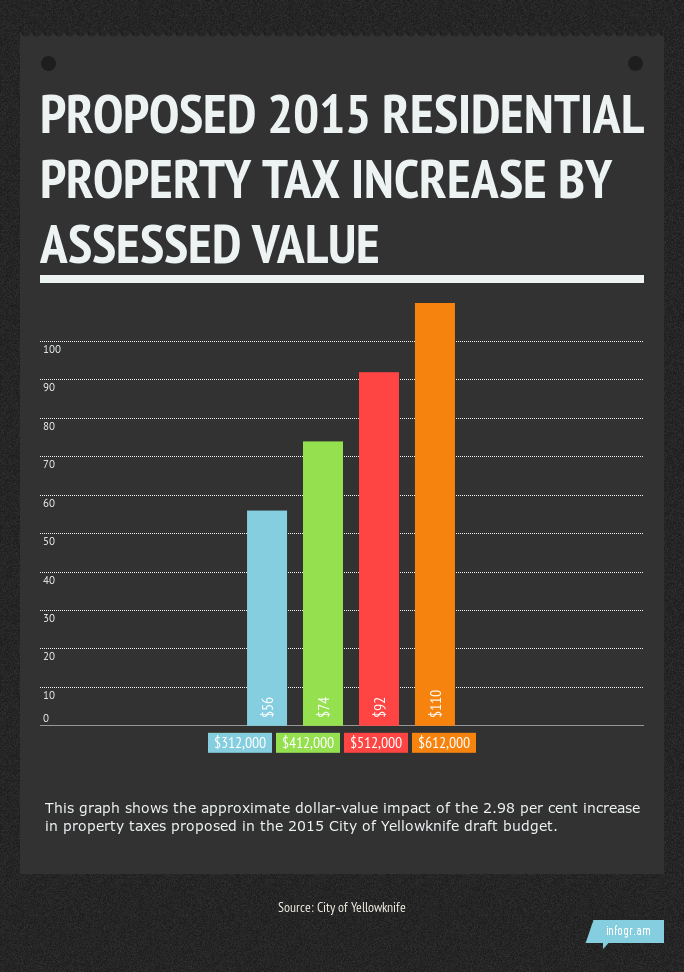 If the City’s budget passes as proposed, the average Yellowknife homeowner will be paying roughly $56 in additional municipal taxes next year.

That number is based on a $312,000 single-family home, the Yellowknife average, said Carl Bird, the City’s Director of Corporate Services. For each additional $100,000 in value, residential property owners can expect to pay roughly $18 more per year.

Bird gave these numbers during a draft presentation of the City’s 2015 budget at the Municipal Services Committee meeting on Monday. Based on current estimates of revenues, expenditures and transfers between funds, the City is looking at a revenue shortfall of $1,031,511 on a capital expenditures budget of $21.97 million.

To pay for this shortfall, taxes should have increased by 4.68 per cent, as was forecast in May. However, the City decided to limit the increase to 2.98 per cent by transferring $264,236 from a surplus in the general fund to pay for part of the revenue shortfall.

Councillors have hinted that this 2.98 per cent increase may still be too large. A number want to see no tax increase next year, which would require either transferring more money from the general fund surplus or cutting $767,274 in planned spending.

Council will have an opportunity to debate these options when they go through the budget line by line in early December. This coming Monday, Council will vote on tax forgiveness for people hit hard by this year’s general property assessment. Council seems near unanimous in support for the motion, but it’s uncertain whether the Government of the Northwest Territories will accept the plan.

The motion, as discussed at the Municipal Services Committee, would do two things. Firstly, properties with more than $1,200 in additional taxes will see them capped at a 10.74 per cent increase for residential properties and 31.28 per cent for commercial/industrial properties.

Secondly, the motion asks City administration to work with the GNWT to introduce new legislation that gives “municipalities the authority to phase-in tax increases/decreases resulting specifically from general assessments.”

Council seems keen to pass both parts of the motion and be done with what Coun. Cory Vanthuyne called the “very long and at times treacherous issue,” the City has been dealing with since Kam Lake property owners saw massive tax increases following the most recent general assessment.

It may, however, run into a wall if the minister of Municipal and Community Affairs rejects the motion because he deems the distribution of benefits too limited.

“I’m a bit concerned that maybe we’re trading one form of preferential treatment for another, given that we’ve created a threshold where you’ve got to have a difference of at least $1,200 in increase in order to benefit from the tax forgiveness,” said Coun. Adrian Bell.

Furthermore, though relief isn’t directed only at Kam Lake, roughly 80 per cent of the potential beneficiaries live there.

“We do have a relationship with the GNWT to consider here. We can’t simply put forward bylaws that we think are likely to be batted down. That would be unethical,” said Bell.

The City’s Senior Administrative Officer, Dennis Kefalas, wouldn’t comment directly on the minister’s response but seemed reasonably hopeful: “I’m not saying the minister will approve this, I can’t comment on that one way or another, but we do have comments from MACA that the current legislation is somewhat antiquated and doesn’t meet the need of a city our size.”