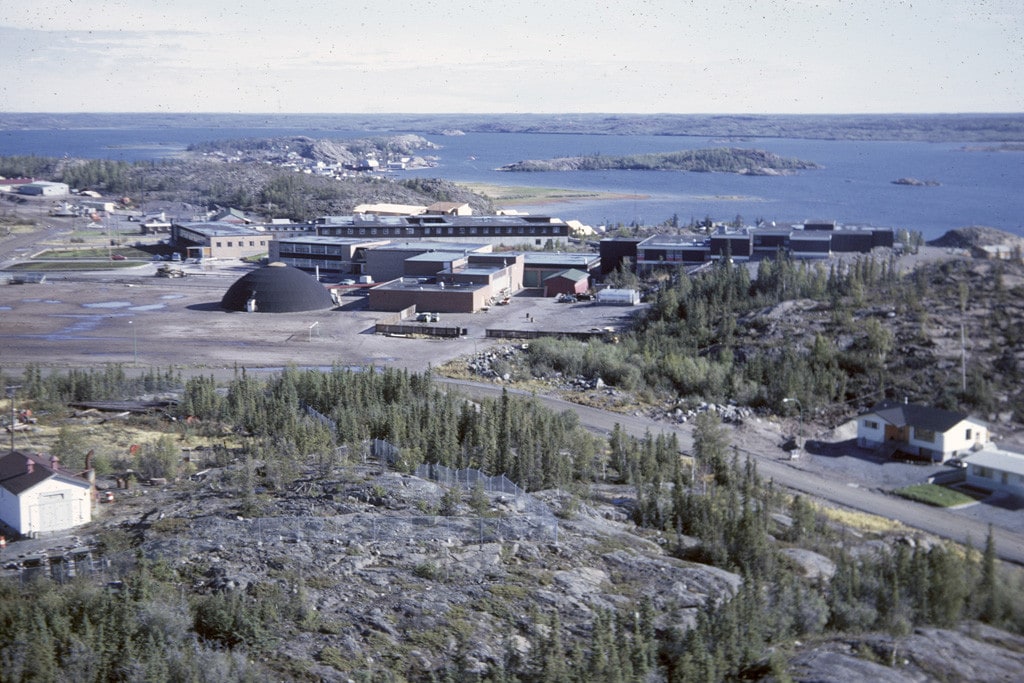 View of Sir John Franklin High School looking north from the roof of Fraser Tower in summer. The round building next to the school is a swimming pool. 1971. N-2006-009: 0012 NWT Archives, J. Lewis Robinson fonds.

The year they built the kindergarten teepee behind Mildred Hall was the year I had to walk across town to high school. Sir John Franklin High School was much farther away from our house than the old Yellowknife Public School, which was only across a back alley and an empty lot. All summer we watched them build the teepee. First they dug an enormous hole, and then someone’s child fell in, and then they put up a construction fence. Life was simpler in the early ‘70s, and much more hazardous for children. Then the teepee sides went up and men wearing coveralls and carrying tools walked in and out, until finally, by September when I set out for Sir John Franklin in the morning, there were five-year-olds playing on new playground equipment in front of the teepee.

By Hallowe’en Yellowknife was dark nearly all the time. I walked to school in the pitch dark and I walked home in the pitch dark. The blackness around me was unrelieved by stars because the street lights were on, but most of the time I was too bundled up and muffled with scarves to be up to the finer points of natural aesthetics anyway.  It was a cold walk.

Sir John Franklin had a strict dress code that insisted the girls wear a skirt or dress, the boys wear dress pants, and nobody wear jeans. Of course, 1970 was the era of the miniskirt and some of the girls I knew risked frostbite in delicate regions to conform to this fashion, but even those of us whose parents insisted on knee-length skirts were in danger of frozen skin, so we covered up with ski pants which we took off in the girls’ bathroom at school, pulling our rumpled skirts out and smoothing them as best we could.

I envied the girls who lived in Akaitcho Hall – the residence for Dene, Inuvialuit and Inuit students from outlying communities, since torn down – right next door, who could dash to school without the impediment of ski pants or the inconvenience of frozen skin.

Then after I ate my lunch in the student lounge (which in those pre-politically-correct days was too choked with fresh cigarette smoke to make eating enjoyable), I took refuge in the library where, if I was on time, I could see through the window both the rising and the setting of the sun before the buzzer went off for our afternoon classes.

The Yellowknife School Board had a policy that they would NOT close the schools until the thermometer registered 60 below. One week it was 58 below with a wind and I walked to school every single day, muttering under my breath without opening my lips because even with a scarf it was too cold to breathe through my mouth.

Then one afternoon a Grade 12 Akaitcho Hall girl came back from lunch wearing dress slacks. She looked the principal straight in the eye and told him she’d wrecked three pairs of pantyhose on school furniture that week and she wasn’t about to spend any more money on stockings, and besides, it was too cold for dresses and nobody expected the boys to wear them.

This early feminist shot across the bow was the beginning of the end of the dress code at Sir John Franklin High School.  I believe that some time before graduation, I even wore jeans to school. You know something? They weren’t as warm as my ski pants.