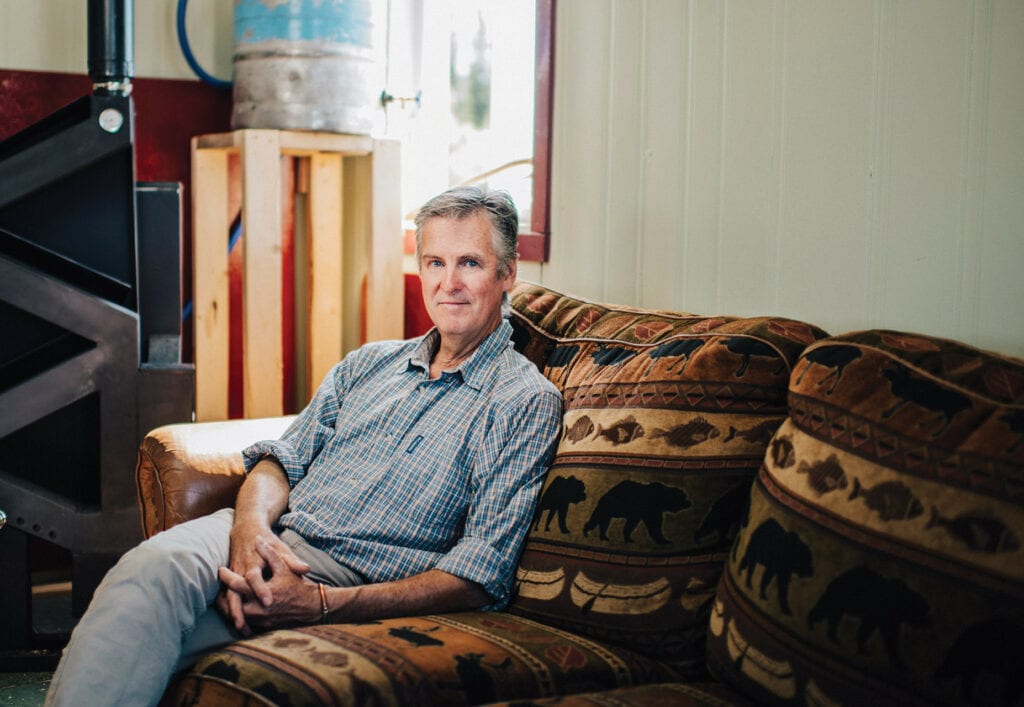 Frans Barnard is making me a latte at Mario’s Marvelous Movie Emporium, his casual coffee shop (you have to watch for the green flag outside to know if anyone is on duty) in a purple houseboat on Yellowknife Bay. While he could possibly scald himself steaming the milk, barista is not a very hazardous pursuit for the ex-British military commander turned international security expert. Normally he’s in war-torn countries trying to ensure humanitarian agencies like Save the Children can actually save the children. But Mario’s provides a sturdy platform, literally, from which the houseboater can launch Yellowknife kids in makeshift rafts into Great Slave Lake as part of their exploration into what it means to live dangerously.

Since the summer of 2017, Barnard and his London-based business partner Graham Mathieson have been offering Dangerous Camps for Kids in Yellowknife, a comparatively safe addition to the work they do overseas in places like Somalia, Yemen and Afghanistan with their company Humanist Risk Management Consultants. Both the camps and their consulting work focus on human interactions, the so-called soft skills – effective communication, negotiation, conflict resolution – that develop “reflective practitioners,” critical thinkers who can assess and problem solve when pitted against danger.

The hard skills, things like putting aid workers through a mock kidnapping or teaching standard operating procedures (SOP) for approaching a checkpoint (remove sunglasses, turn the radio off, make sure no valuables are visible, only open the window enough for communication, lock your doors) Barnard leaves to others. “Our experience is that that SOP may work at one checkpoint one day and be the exact thing that gets you shot the next day,” he says as he slides my latte across the wooden table.

If you want to talk about danger, Mario’s is the place to come. If you think Yellowknife, or the world, is a dangerous place, be prepared to be challenged by a Zimbabwean-born committed humanist who will argue passionately it’s not so bad, peppering the conversation with talk of wicked problem theory, perception vs. reality, empirical studies and anecdotal evidence that mostly boils down to his view that it’s dangerous to look at any social issue, including violence, through a binary lens.

“Most of our problem solving is binary problem solving, it’s around identify the problem, identify the solution, implement the solution, monitor and evaluate and go onto the next problem,” says Barnard. “Which comes out of an engineering, fairly mechanistic paradigm. What we have experienced in a lot of the places we work with and we feel is an issue across the board is that very few problems nowadays are that simple, they are not a one-plus-one-equals-two.”

He cites a local example of the RCMP decision to stop picking up intoxicated individuals. “That was a fairly binary decision: this is costing us too much time and resources, therefore stop doing it. But I don’t think they necessarily then considered what the knock-on effects were in terms of the other services that then had to pick up slack,” he says. “So we have EMTs going out and the paramedics on what were essentially very expensive calls to just then pick someone up and they then equally – because they didn’t have even the cells to put someone in – took them to emergency, so there was then the increase in violence that the emergency ward at Stanton had to deal with as well.”

But what if the RCMP had been saying for years their holding cells were not meant to be sobering centres so they pulled the plug to force other agencies into action? I posit. His response, while diplomatic, only thinly veils his distaste for such a hypothesis. “If that in fact was their decision-making process, we would argue there are better ways of going about it.”

At this point his 12-year-old son Maliq bursts into the houseboat with Chili, a large rescue dog from the SPCA, breathlessly imploring his father to allow him to take the dog to the snowcastle. She’s new to the family and still a little unpredictable. Request denied. Maliq exits with equal flurry and Chili resigns herself, somewhat sadly, to our company.

Before moving to Yellowknife from Kenya in 2014, Barnard says Maliq, their “feral child,” had only ever known flip-flops and heat. Wishing to expose him to some adversity, Barnard and his Canadian-born wife, Dr. Heather Hannah, left their sun-kissed home south of Mombasa in search of winter. “We thought it’s time you experienced some pain, cold and suffering so let’s get you back to Canada for awhile,” Maliq was told. Hannah took the job of territorial epidemiologist and they bought a houseboat near Mario’s, although they escape back to Kenya for December and January. “It makes living in Yellowknife very doable when you can avoid those particularly long and dark days,” Barnard says.

Exposing kids to adversity is one of the main thrusts of Dangerous Camps for Kids. The mostly pre-teens who attend the week-long summer and winter camps (at $500-$600 a crack) will be able to “do those things that you have always wanted to do but been told you cannot because ‘it’s dangerous,’” according to the camp’s Facebook page. That includes using power tools, building rockets and mixing their own rocket fuel, doing all the menu planning and devising shelter for a campout at 20 below and making fires without matches. If someone does get hurt, no worries, “You will learn basic first aid for when your friends injure themselves doing dangerous things!” they’re told.

Boomers may scoff at the effort, saying this kind of semi-risky play is just what kids do naturally. But Barnard believes society as a whole has become so risk-averse and fear-driven post 9-11, so obsessed with stranger danger, that many children are cloistered from experiences with others that build character and resilience, such as collaboration, cooperation, and most importantly, failure.

“Some people don’t like failure because it might damage self-esteem whereas we feel, no, actually we value failure, we want failure and even when we work with adult groups overseas we build failure into the process,” says Barnard. “Because when everything’s going well, we’re not really demonstrating anything. It’s when there’s a bit of adversity and a bit of failure that we get far more of the important personal and interpersonal stuff coming through.”

During last summer’s Dangerous Camp, the deck of Mario’s was littered with blue barrels, ropes and pulleys, impact wrenches, drills, axes, lumber and hatchets. “We said to them, ‘zombies over there, island’s safe, you guys need to build something that will get you off of Mario’s and onto the island without getting wet’… so they flew at it,” says Barnard.

“There were drills going and we watched and we watched until they tried to lift their structure up only to discover that they had screwed it to the deck. At which point the youngest in the group said, ‘Guys, stop, we need a plan.’” They successfully executed a plan which got them to the island. “That was to us really significant because we’ve worked with ‘quote unquote’ high-functioning adult groups who don’t go through a planning process and fail because they don’t go through a planning process.”

Of course, if the kids don’t succeed there are adults around with military experience in Arctic survival skills to save them, and the whole operation is insured through Lloyds of London. These camps, ultimately, are not truly dangerous in any unsupervised, Lord of the Flies, vein. They’re more free-wheeling opportunities to problem solve using tools and scenarios not traditionally afforded most 12-year-olds. They’re also an exercise in trust for parents who have to accept if their child is going to use a hatchet or a knife, they could cut a toe or a finger.

“Is it possible? Absolutely. Is it probable? Hmmm, it can be mitigated to a significant degree,” says Barnard, who stresses too often people get locked into fearing what’s possible over rationally looking at what’s probable. “Humanitarian workers have become petrified of being kidnapped, assassinated or whatever, even though objectively most of these events are happening with decreasing frequency.”

But there’s the rub. Barnard was kidnapped at gunpoint and taken hostage in Somalia in October 2010 while on contract with Save the Children. I only discovered this when I Googled him after our interview to double check the spelling of his name and two articles from The Guardian newspaper appeared.

“Ah the forever joy of Google,” he wrote when I emailed him to see if we could discuss this. “Somalia old news and not really something that I talk about even with family.”

Respecting that this is a highly personal experience that must have been horrifying for him, his family and colleagues, and that I can’t verify the events beyond what another media outlet says about them, I’ve been mulling over the reported details and two things stand out for me. According to The Guardian, there were shots and gunmen banged on the door of his hotel room, telling him to open it. He refused and lay down flat in the far corner of the room.  (I wonder if that was standard operating procedure, because the next thing they did was shoot through the door.) Eventually the men forced their way in through a window and located him using the light of a cell phone.

He was taken through the window into a car which sped away, then marched across the desert for five days to different hiding locations until pressure from clan elders led to an intense negotiated release. The elders felt responsible for him as it was they who had invited Barnard to their village. He was well-known and spent a lot of time in Somalia.

To continue humanitarian work after such an experience speaks to a person’s convictions and resiliency. Barnard was saved, without violence, by the goodwill and respect he’d garnered working on the ground to develop relationships with Somalis. That goes to the heart of his argument that humanist approaches succeed.

The kidnappers, 10 men, were mostly teenagers. Barnard would know more than most of us how little childhood, if any, they’d eked out before their lives were consumed by danger. The UN reports that 477 Somali children were killed or maimed by warring factions last year. If it were possible amidst the anarchy, they are deeply in need of a camp where they can just play, safely.