Producer Dan Misener is inviting 15 to 20 adults to read from journals, letters and diaries they wrote before adult-sized problems usurped their teen angst. The open mic evening will be taped before a live audience at the Top Knight, and an edited version will air as a podcast and on CBC radio.

Misener told EDGE he and his wife Jenna started the live shows in 2007, mostly in Toronto, after she was asked by her parents to go into their basement and “get rid of all the crap that’s yours.” Languishing amongst her childhood detritus were diaries Jenna wrote between the ages of 12-14.

“She was just starting puberty, interested in boys, hating her parents,” says Misener. “She read it out loud and it was hilarious, parts were funny, parts were sad, it was this completely different part of my wife’s life that I hadn’t heard before.

“It struck us that wouldn’t it be fun to do this with more people, at a bar, have a drink and kind of laugh at ourselves.” The live shows became podcasts that he successfully pitched to CBC Radio last year, which then allowed Misener to begin taping shows around the country. Yellowknife will be part of a four-city tour including Calgary, Edmonton and Winnipeg.

Among the most outrageous stories he’s heard was a Halifax man’s recent recollection of being a junior high student who overcame his terror of asking the girl of his dreams to slow dance, only to have them both become aware of his ill-timed erection.

As gutsy as that was to read, Misener says what impressed him most was learning what the man did as showtime loomed and he realized he didn’t have the physical journal on him.

“So he had to call his mom and have his mom read the journal entry about this 13-year-old’s boner. It takes a lot more guts to have your mom read it over the phone to you.”

Not all stories are funny. People have disclosed their struggles with self harm and abusive parents. But the tone of the show still manages to remain optimistic. Misener often gives readers a chance to talk about their experience of opening up during brief interviews after their performance.

“The radio program has given us an opportunity to highlight the range of material that shows up.

“Some of what people bring is serious or it’s bittersweet or it tugs at your heartstrings and we want that stuff, because part of our goal is to reflect the experience of growing up, all the good parts and the hard parts, because growing up is hard,” says Misener.

If you’d like to hear some of Grownups Read Things They Wrote As Kids, check out a podcast on the website or on Soundcloud.

If you’d like to sign up to read at the Yellowknife show, or buy tickets, go here. 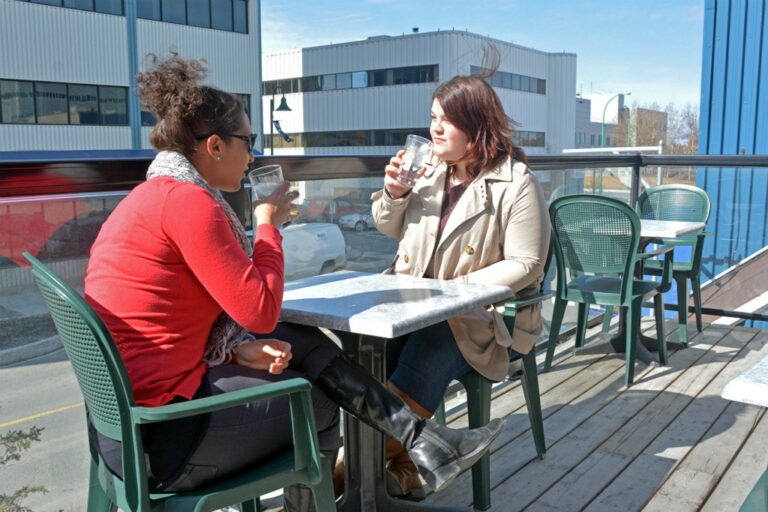 YK Patio Season 2016: A Guide to Eating (and Drinking) Outside