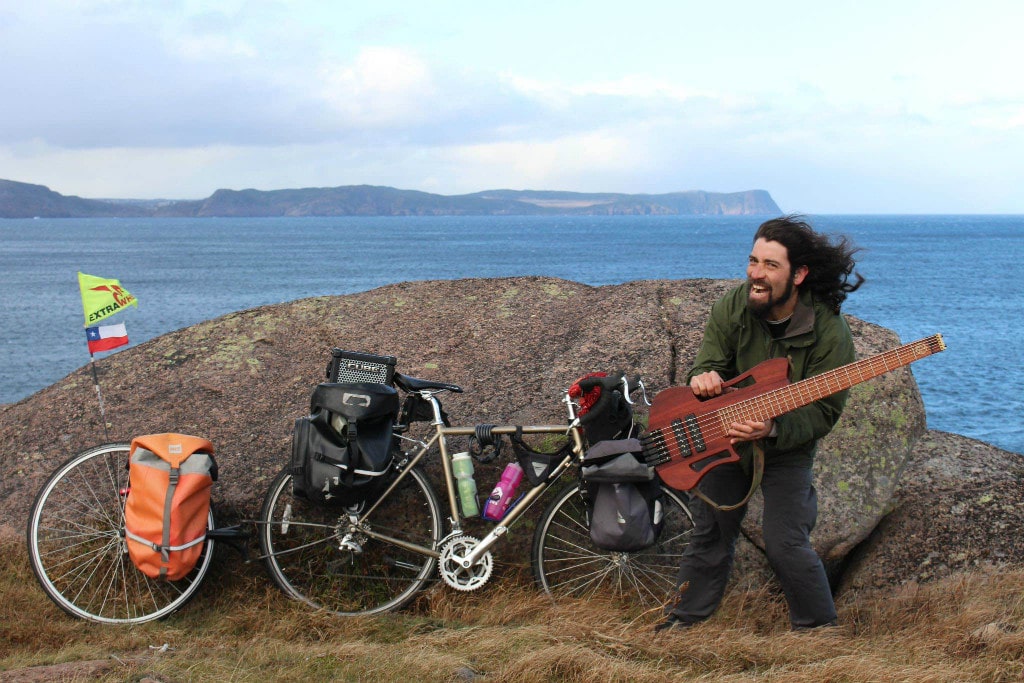 Bass is the word this Saturday afternoon, with Felipe Gomez, aka the Eddie Van Halen of the bottom notes, bringing his low-end wizardry to the Snow Castle.

If you’ve been hitting live music shows and open mics around town over the past several months you’ve probably seen Felipe; he’s the heavy-metal-haired Chilean dude making his six-string bass hum like Jaco Pastorius. He’s been in Yellowknife since November, living in a cabin on the edge of town.

Felipe isn’t your average touring musician. For the last two years he’s been travelling the country on bicycle, playing everything from barns to bike shops. Loaded with 70 kg of gear, including an amp, camping gear and a bass that folds into three parts for ease of travel, Felipe rode from Vancouver Island to Saskatoon in 2013, and then on to Newfoundland the following year. His next big adventure starts on April 15, when he’ll attempt to ride the half-finished highway from Inuvik to Tuktoyaktuk, then back down to Whitehorse.

The idea for a Bike and Bass tour was born out of late night conversation in a Saskatoon watering hole. “I was in a bar one day, talking to someone and saying I want to tour the world on a bicycle,” says Felipe. The elementary school teacher, who has called Saskatoon his home for the past five years, didn’t have any experience with bikes. Nonetheless, “I woke up the next day and decided to do it.”

What followed was more than 11,000 km of pedal pushing and a whole lot of solo bass. Along the way he’s been raising money for Saskatoon United Way, teaching music workshops and making a documentary about the adventure.

“The main point is to inspire people to find their passion and show people they can do whatever they want with music,” he says.

For Saturday’s show, he’ll be joined by singer and accordion player Gillian Snider from his band Bass Invaders for some metal-inspired world music.