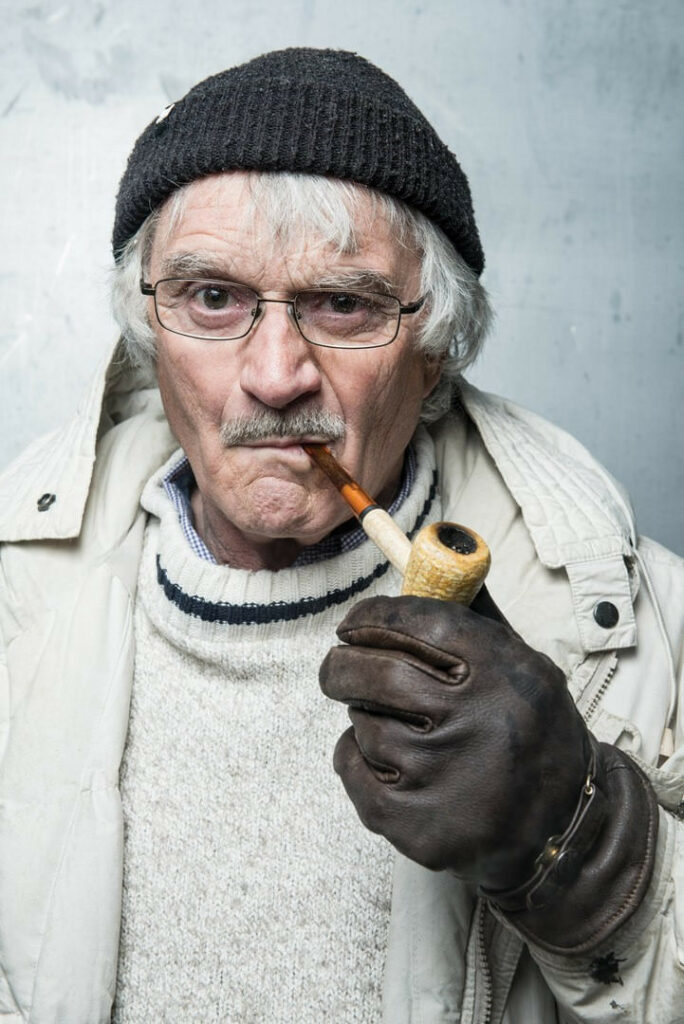 He’s trained in hand-to-hand combat, met Elvis, shared a stage with The Beatles and piloted the skies to find the gold that started Fortune Minerals. At age 71, and with a resume like that, you’d think Yellowknife’s Carl Clouter would be a man without regrets. Yet through his bushy white moustache, he laments that he does have just one, and it took him nearly a lifetime to realize it.

The transplanted Newfoundlander is as colourful as his sprawling Kam Lake home, where remnants of his varied careers – including a float plane he rebuilt – dot the yard. Just how he ended up here is a storied tale.

It’s easy to hear in his voice that Clouter grew up in Catalina, N.L. He was a self-claimed “aggressive” child – aggressive in his determination. “I wanted the moon for example; my grandfather used to tell me I couldn’t have it,” he says. He was a kid with ambition, thirsty for experiences.

His first job was as a cab driver, and that didn’t quite suit his need for excitement. Next, a bartender – this explains his relaxed social skills; he can lean back in his chair, cross his arms, raise his eyebrows and tell a story like he’s known someone their whole life – but soon enough he grew bored of that too, and enrolled in the military. Then he trained as a killer for the Cold War, but never had to put those skills to use.

“I think everybody should join, in my opinion,” he says of the Armed Forces. He likes how it teaches respect, to follow commands and how it “brings out your best physically and if you let it, mentally.” After his whole, career-filled life, this is the job he recommends to any young person today.

The military took Clouter far. In 1963, before the Seattle World’s Fair, he found himself opening up for The Beatles as a singer with the Canadian Tattoo. “They were just another bunch of guys playing music. I don’t think anybody there at the time realized where they were going,” he says.

“Although, they were good. They were different – they were English!”

He’d seen Elvis Presley walking nearly every day during the two weeks the Canadian Tattoo performed at the world fair. He found himself in the elevator with The King himself. Most would be too star-struck to pipe up, but Clouter had no problem with that. “Matter of fact, myself and John Waller said, ‘I think you’re Elvis Presley.’ ‘Matter of fact, yes,’” Elvis replied. Clouter chirps with laughter.

That was his only chance to talk to the King. “There were always a lot of guards with this guy, he was very well protected. It was really quite amazing. You can do a lot in 70 years you know.”

While he was on leave in the military, he met his future wife, Norma, at a dance. He was later deployed to Germany and thought nothing of their encounter, but as soon as he came back, they couldn’t help but stay together. When asked her first impression of him, Norma answered without hesitation. “I fell in love with him right away. I did,” she said. They married in 1966. In years to come, they had a daughter, Heather. “She’s a super lady,” the proud father says with a smile. Clouter prospecting in central Newfoundland in 1973.

After the military he applied to Manpower – that’s what people did to get a job back in those days, he explains. He was interviewed, and when the employment recruiter found out Clouter’s only training was in hand-to-hand combat, he replied, “Well, I don’t think Al Capone’s lookin’ for anybody. There are no jobs for you, Carl. Sorry.” Clouter needed to work. He bartended again for a while, but as usual, it wasn’t enough. Next, he ran a mini-golf course and a two-bay garage combination for a friend of his mother’s. He managed this for about a year-and-a-half before he started in maintenance for Eastern Provincial Airways with a broom in his hand. Soon enough, he completed his Twin Engine Endorsement and began to fly water bombers.

Water bombers brought him to the North for the first time in the early seventies. A Newfoundland boy through and through, he was excited by the new landscape. “I came across that lake in early July and it was still frozen,” he remembers, his cheeks growing round with his smile. “I said, ‘What the hell is this?’ Then we had hot, hot weather!” He soon began to take every water-bombing trip that involved him going up north until finally, Jimmy MacAvoy called him to ask if he would consider filling in as a chief pilot for Air Dogrib. Clouter agreed to stay for three months, but he and his wife stayed with the company for 21 years.

In his years in the North, he tried his hand at many things. He was approached by the RCMP and the band in Behchoko to see if he was interested in being a sentencing justice of the peace, because, as Clouter puts it, “it’s not nice putting people in jail. I knew the people and I respect the people immensely, and it went on from there.”

He conducted one of the first circle sentences ever performed and says he found it easy to sentence a person justly, whether it was a very close friend or an enemy. “Strangest thing, I’ve had people I’ve put in jail get released and buy me a beer in the Gold Range. I must have handled them pretty well to have that kind of respect – never any issues when I met them on the street,” he says. After seven or eight years he resigned.

He also delved into real estate in the Behchoko area for a short while, too. “Yeah – what else is there do to, right?”

Well, he found more to do. He started his own charter airline, Edzo Air. He owned it for 11 years, in a partnership with some people in Behchoko.

He sold it because for a while he lost his medical certification in 1994. Six months later he got it back, but had already sold the airline. However, that wasn’t the end for Clouter’s flying days.

The prospecting bug, that is. “It’s that feeling when you can go out and go prospecting, and find something that might have potential. Something nobody else has found,” Braden says. “Plus, he’s very diligent.” Clouter remembers when he was given his first prospecting tool by a guy named Rob Hocks while flying a Beaver in Newfoundland.

“He gave me my first rock hammer, he shouldn’t have done it,” Clouter says with a smile. He started studying geology, and with his own airplane, he admits he has an edge over most prospectors up here – both in his knowledge and mobility. “I know rock formations very well, I’ve looked at them a lot,” he says. “Even looking for forest fires. If I see something different like coloration or structure or anything that’s abnormal, I will go look at it. The other guys don’t have that option.” In 2009, at Fortune Minerals exploration camp. Clouter staked the property, which is becoming a mine.

Fortune Minerals, which is developing NICO, a gold-cobalt-bismuth-copper mine 160 km from Yellowknife, was founded on properties owned by Clouter. That led to him landing a spot on the board of directors for the company. “Carl was a character, but we looked beyond some of his deficiencies and we started up Fortune Minerals,” CEO Robin Goad jokes. When he says Clouter’s deficiencies, he simply means his northern charm.

They were out on an expedition in the bush and Clouter’s job was to bring the tent. He forgot all the poles. “I can remember one instance where he used to deliver samples to the Con Mine in Yellowknife and one of those samples graded over 100 ounces of gold per ton but Carl couldn’t remember where he collected it from,” he adds. “But he is a great pilot. That needs to be said.”

A great pilot isn’t made without a few learning opportunities, though. “We don’t use the word crash, sometimes we call them unplanned landings,” says Goad. The bar top of the now-defunkt Bush Pilot’s Brew Pub was actually a wing from Clouter’s Beaver. Clouter was taking off when his entire wing fell right off. “He put a tree stump in there to keep it together,” remembers Goad. Clouter flew back to Yellowknife in the spliced plane. He’s resourceful and quick in that way, which is what made him a good candidate for helping others, too. He’s rescued several lives out in the bush (and claims he himself hasn’t had to be saved yet – just “picked up”).

“I’ve never had a job. None of it’s been a job,” Clouter says of all his past careers. But he admits his favourite “job” has been the flying. “My dad worked in Gander, N.L. When I was about five years old, he used to tell me about the big silver bird in Gander and it’s used to take people into the sky.

That started my interest in aviation and whatever the devil this silver bird was.”

While his interest in flying was piqued as a child in Newfoundland, his aviation and prospecting career is what gave Clouter a sense of his true calling in life. When asked if he has any regrets, his face saddens. “I didn’t come up here sooner,” he says. “Had I known, I would’ve come here right from getting out of the army. That’s the only thing I regret.”

But Clouter’s got white hair and a few aches and pains now. He can’t fly at the moment due to an artery complication. He says his cardiologists and doctors tell him he is fine, but there’s a board in Ottawa that still has yet to give him back his medical certifications. “I’m about to decide that the two cardiologists I talked to and the two medical examiners who are also Transport Canada overrule the dumbbells in Ottawa. I’m about to decide that myself,” he says. “And you can put that in there if you wish!”

Now he’s spending a lot of time playing guitar, singing and writing poetry. “A lot of times when we go out to a friend’s house he ends up playing guitar and singing and that,” says Norma. “I love his music. He’s a very romantic man.” This prospector feels he’s got a lot to do yet in his life, from rebuilding his 1929 Chrysler to flying to Greenland, but he accepts he hasn’t got the time to accomplish everything. “I’ve got so much to do,” he says. He feels good about all the things he’s gotten done in the past 71 years. He decides his greatest achievement, after all, is raising a family. “That’s pretty important, isn’t it?” he says. Norma warmly agrees. “Now we’re living happily ever after.”