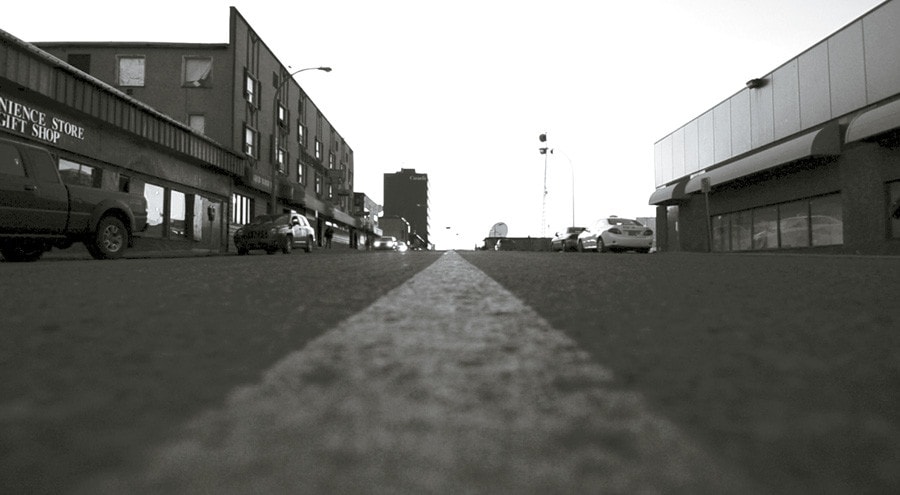 text and images by Jay Bulckaert

Back in early August, the Yellowknifer ran an article about the City’s plans to revamp Range Street, that glorious institution of drunken mayhem and public buffoonery. It seemed they – and the public at large – had a hard-on for taking out the trash, so to speak, and I was on board. My response to a facebook thread at the time read, “It’s a tragic wasteland filled with zombies. Raze it to the ground and rebuild.”

After posting I promptly went to the bar to meet my buddy Pat Kane, one of the North’s most sought-after photographers, and we proceeded to do exactly what makes Range Street something to talk about; we got drunk and loud. But what transpired during that weeknight summer givin’r-session was totally inspiring. Pat had long talked about doing some kind of photo shoot or documentary on Range Street, and while it was always genius, that night in August, as we sweated through a pint-session in the corner of a muggy bar, it became crystal clear that this wasn’t just another booze-fuelled idea to be forgotten the next morning. This was the real deal, Pat had hit the nail on the head and I wanted in. It was the right time, the right place and who can deny the sexiness of the subject matter: alcohol-fuelled stupidity, fights, drugs, maybe a little sex, and obviously rock ‘n’ roll. After three months of shooting, we are barely scratching the surface of the Range Street story. Our number one commandment from the very beginning has been to be truthful, for better or worse, whatever that means. To us it means not shying away from the relentless tragedy and heartbreak we all know to be present every day and night on that street. We all see the downtrodden, the addicted, the people spitting and fighting, and the tirades of swearing and yelling from across the street. And this fall I saw a kicked-out customer attempt to fly kick a Diner server out on the street. Whatever you do, tip the people working on Range Street well.

But what we’ve seen and learned in equal measure in our short time shooting is that it’s our job to tell the other side of the story; that there is hope and, indeed, goodness on that street. It is its own little community of people who look out for each other, or at the very least, look for each other. People from out of town go there to meet their loved ones, socialize and even make money on the side to live their lives. They rally, often brutally, but they are indeed together. The street is also undeniably filled to the brim with colourful personalities.

There are also business owners who have had success for years and don’t intend to leave. There’s a motel at which you have to pay a $100 non-refundable deposit just to get a room. It’s also home to arguably the most entertaining house band I’ve ever seen, which performs at the bar that “everyone needs to go to once while you’re in Yellowknife.”

Even so, it is forever home to lonely women crying in alleyways and drunken men stumbling around with black eyes; all of which builds on a past that harkens back to the Wild West strong and free.

Our hope is to embed ourselves in the community of the street, win people’s trust, wrap ourselves in their stories and shine a light where most see no value. We hope to do right for the street by being honest: simply and humbly honest. We have no idea what the end result will be and I think that’s good. And for those who think this project is a waste of time, let it be said, ain’t no one making a movie about your street ‘cuz if there’s one thing we can all agree on, it’s that Range Street is never, ever boring.