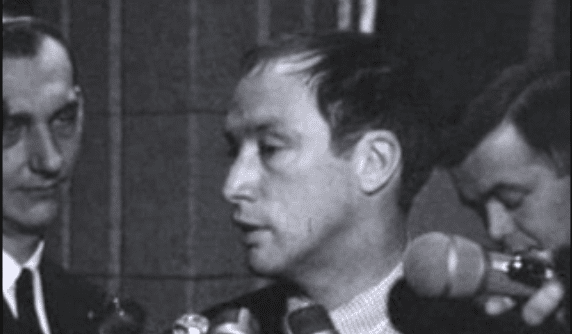 Pierre Trudeau, telling reporters "the state has no place in the bedrooms of the nation," a quote inspired by Klippert's case

In 1965, Everett George Klippert, a 39-year-old mechanic’s helper, was charged with four counts of gross indecency in the now-abandoned town of Pine Point, NWT. Deemed “incurably homosexual” and detained indefinitely as a dangerous sexual offender, he was the last person to be imprisoned for homosexuality in Canada, and his case, which went all the way to the Supreme Court of Canada, was a catalyst for then-justice minister Pierre Trudeau to push for the decriminalization of homosexuality. The law passed in 1969 after Trudeau had become Prime Minister. Last week, 45 years after Klippert was released from prison in 1971, Justin Trudeau announced that his government would be recommending a posthumous pardon for Klippert.

Actor and playwright Ben Nind, of Stuck in a Snowbank Theatre, has been working on a play about Klippert for the last two years, The Mechanic’s Helper, which will be receiving a final performance-style workshop in Yellowknife in mid- April. Nind’s research was also used by Globe and Mail journalist John Ibbitson for his recent feature article pushing the idea of a posthumous pardon. EDGE met up with Nind to find out what he’d learned about Klippert while researching the play and why this story is an important one to tell.

EDGE: Could you remind us who Klippert was and the circumstances that led up to his arrest in 1965?

Nind: He was from Saskatchewan originally, and he’d had been convicted of gross indecency while he was living in Calgary, working as bus driver and a milkman. When he was released he went North and ended up in Pine Point, working in the garage as a mechanic’s helper. Apparently he was a wonderful worker, he was a wonderful person to know, he engaged really well with all of the employees, and he had relationships with the men on the mine site.

The [RCMP] officer at the time was Const. Bruce Armstrong, who’d been assigned Pine Point. He had received a complaint from one individual within Pine Point about Klippert, though he didn’t bring him in on the complaint; he brought him in as a suspect in an arson, because the mine manager’s house had been set on fire.

EDGE: So Klippert was arrested on false pretenses?

Nind: Well, he was the only one to be brought in on this supposed fire. He was then questioned about his personal activities with men and he could have kept very silent and said ‘what is this about?’ But instead he said ‘Yes, I’ve had these relationships,’ then he opened up about all these relationships he had.

In reading the police interview it became very evident he was not willing to hide anything. And I think it was greatly influenced by the time he had already spent in prison, about the type of societal pressures that were put upon him, and he was not a man to be kept silent. He said, ‘Yes, this is who I am, I’m not violent, everything was consensual, what more do you want to know?’ And as a result of that interview, he was brought to Hay River and the RCMP laid four charges against him, and those four charges were the charges that were brought all the way through to the Supreme Court. He was held in Hay River, then held at Fort Smith, then he was sent to Prince Albert, where he served his term.

EDGE: Did you manage to find out anything more about the circumstances surrounding the arrest?

Nind: I also found Const. Armstrong. He’s still alive, he lives in Calgary. He has dementia, however, he remembers 1965 as if it was the back of his hand.  His role was to enforce the law, to investigate the complaints and enforce the law. When asked, ‘well, why bring him in on arson and charge him with gross indecency in the end?’ He said, ‘Well, I received a complaint and so I forwarded it.’ He gave nothing else.

But I had a sense that there was this incredible respect that developed between the two of them. When I asked, ‘when you brought him to Hay River did you throw him in the back seat? Did you handcuff him?’ He said, ‘No, he was a nice guy, he was respectful, he was very articulate, and he was a man that had a sense of humour and he rode up front with me all the way to Hay River’. And that is referred to in the last part of the play, that journey to Hay River, where the two of them kind of make fun of each other.

EDGE: I understand that even though Klippert’s case sparked legislative change in 1969, he wasn’t released from prison until 1971. Do you know why?

Nind: Good question. Though it’s almost impossible to find the administrative papers to answer that question. There were periods of time during his incarceration where he literally disappeared off of the face of the earth, where even the Member of Parliament’s office was unable to find him. They knew he was in the Prince Albert Penitentiary, but they didn’t know where he was for periods of time, what kind of therapy he was going through, etc. etc.

At that time there was a lot of electric shock therapy and other types of therapy that were extremely intrusive that went on, but I have not been able to find the paper work relating to that. And my thought was Klippert was incredibly quiet about any of that happening to him. He was a very quiet, personable individual.

EDGE: What did you find about Klippert’s character through your research?

Nind: He was a very gentle man, incredibly respectful, incredibly quiet, who had a sex drive and an attraction for the human species, as in any heterosexual relationship. There was nothing that stood out about him that was cruel or sadistic or demented in any way. He was just an ordinary guy who was trying to live an ordinary life under very, very difficult circumstances.

EDGE: There’s obviously a huge amount of narrative material here with this story. What does your play focus on?

Looking into the archives, I found these incredible personal letters and articles and correspondence between Klippert’s sister, who was advocating on his behalf, psychologists, the warden of the institution where he was held in Saskatchewan, clerks of the courts. There were also many letters supporting the NWT MP Bud Orange’s support of Mr. Klippert, and also many insulting him; here was a case that was inflammatory at the time. It was divisive and there were strong opinions on all sides.  Because it actually made it to the Prime Minister’s desk, we hear the discussions between Trudeau and John Turner and we hear from the floor of parliament what was said. There’s 27 characters played by seven or possibly eight actors.

EDGE: I understand your research was used by John Ibbitson in a Globe and Mail feature about Klippert that came out about a month ago, leading up Justin Trudeau’s announcement.  Is there any sense that that article, and thus your research, led to the pardon?

Nind: I don’t think so. It was being discussed already, but I think the article has pushed it. So to have been just a small part of that, providing information, has been really important for me. To have the play already in development for the past two-and-a-half years was just part of the process of creating new work for me. But to have it now actually merge with this national initiative, where we are talking about a scene which takes place in the Prime Minister’s office, and here we have a scene that takes place in the Prime Minister’s office [today], is a full circle. To be part of that whole is incredible.

EDGE: Why is the story relevant today?

Nind: I think this play asks the question: why? Why in 2016, is this still an issue? And why has it taken o long for any reconciliation to take place in this particular case? The story is also very reflective of the times. We’re talking about a very hard left, hard right view political world here in the West, driven by a number of issues, one of which is still whether it’s okay in society, a woman kissing a woman or a man kissing a man, or someone to be called they rather than he or she. Those are enormous societal questions that are still being contemplated. But those questions, when you look historically, have always been there.

I hope that this story resonates with people, educates and entertains them and moves them to say, why didn’t I know about this story before? It should be one of the canons of Canadian stories that needs to be told over and over again.

Of course this story has been told, but very quietly, almost underground, since the beginning. If you do your research and look at those queer papers and queer media outlets, the historical references to Klippert are there but it has never come out in the body politic to be accepted and reviewed and now actually celebrated in the way we’re now seeing.

EDGE: What happened to Klippert after he got out of jail?

Nind: I think he died in the late 1980s in, I believe, Saskatchewan [Klippert died in 1996 – ed]. He actually came out of prison and he married a woman. Lived a very quiet life, the two of them, so I have no idea about that period of time afterwards. And really that for me was so private, for me that was a conscious choice.

As playwright, it was about defining the bookends of my story. Here is a man who was so private, he was engaged in the most private of private that became the most public of public. Why would you intrude any time after that piece of legislation came down in 1969? So that’s when I finished, because I said to myself, I cannot imagine what he was thinking when those doors opened to release him, and I cannot imagine what he went through during all those years of incarceration.

Klippert is an accident of circumstance, he is a hero of circumstance. He never asked to be a hero; he never raises his voice and says I’m a hero.  To me the story is really about when a man says enough is enough, and doesn’t set himself out to be a martyr, doesn’t set himself out to be a saint at all, just says, in my individual case enough is enough I’m going to tell you the truth, the whole truth and nothing but the truth, and if you can handle it, great, if you can’t handle it, that’s your problem, not my problem.

Stuck in a Snowbank Theatre is looking for male actors, age 19-45, to workshop/perform The Mechanic’s Helper in Yellowknife in mid April. Auditions for will be held Tues. March 8, 7:00pm-8:15pm at the Yellowknife Library Meeting Room. For more information, Nind can be reached at snowbank22@gmail.com. 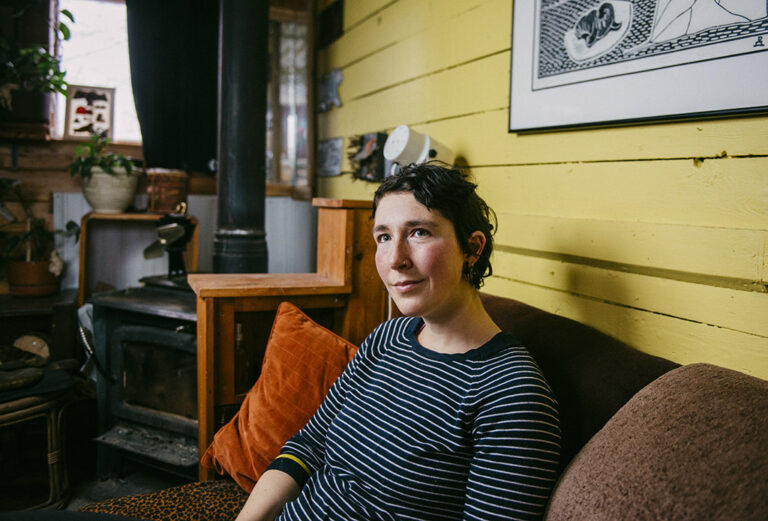