It was fun while it lasted.

These are not insignificant line items. And they’ve generally been accompanied by handfuls of smaller initiatives that help very specific constituencies, like geoscience funding and adult education.

There was little of that in Tuesday’s federal budget. The headlining item for the North isn’t a spending item at all, it’s the government’s pledge to increase the borrowing limits for the NWT and Nunavut, respectively, to $1.3 billion and $650 million. Both territories are getting less than they wanted: NWT finance minister was after a new debt cap of $1.8 billion and Keith Peterson, his Nunavut counterpart, was looking for $750 million.

But the new figure at least represents some breathing room for cash-strapped governments that want to spend on infrastructure but face flat revenues. Premier Bob McLeod also announced Wednesday that the GNWT has reached an agreement with Finance Canada that will no longer count “self-liquidating” debt against the territorial debt ceiling. What this is means, said finance minister Michael Miltenberger, is that territorial debt that pays for itself by generating revenue will no longer clog up the GNWT’s borrowing room. The single largest example of this, Miltenberger said, is $200 million worth of NTPC debt, which is paid for by electricity rates.

So there’s at least $700 million worth of wiggle room for the territorial government to pursue its favoured list of major infrastructure works: new alternative energy generation capacity, the Mackenzie Valley Highway from Wrigley to Inuvik, and possibly, though details remain sketchy, some kind of Slave region transportation corridor, which may include collaboration with Nunavut. (The GNWT will also be able to chase its share of the $5.3 billion available annually for infrastructure under the Building Canada Fund.)

“We see it as part and parcel of devolution,” McLeod told reporters, “because it gives us the flexibility to work on a number of different projects. We’re not constrained by an artificial cap.”

Otherwise, the budget was thin on Northern-specific items. There’s $5.7 million for the sealing industry, including money to create a certification regime for Inuit-hunted pelts, which will allow an end-run around the European Union’s (dumb) ban on seal products. To their credit, the Tories have held fast on sealing, even if it might’ve been easier to wash their hands of it. But while the cultural importance of seals to Inuit cannot be overstated, the economic impact of this particular proposal will be marginal. It will, however, serve as a nice little talking point for Leona Aglukkaq during this fall’s election campaign.

The budget calls out $34 million for weather and navigational services in the strategically and symbolically important approaches to the Northwest Passage, but it’s not new spending. Ottawa will continue to do this. There’s also $17 million for charting and aids to navigation in Arctic waters, which was welcomed by Inuit Tapirit Kanatami.

Partisans will helpfully point out that Northerners can make use of other elements of this budget, say, for example, the tax cuts for small business, a suite of tax credits for families, trades training, and spending on Aboriginal labour market programming. The Tories have made no secret that they plan to run this fall’s federal election campaign on the back of this balanced budget, which is underscored by the fact that finance minister Joe Oliver chose the most suburban-dad sneakers imaginable for his pair of ritual budget day shoes. That is the core of Tory support nationally, and this is a budget for them.

For the last nine years, the Tories have used the North as a spectacular backdrop for burnishing their credentials on foreign policy and nationalism, while avoiding as many major spending commitments as possible, $3.5 billion worth of seasonal icebreakers notwithstanding.

This week’s budget may well mark the final phase of the decades-long process of Ottawa extricating itself from direct involvement in building Northern infrastructure. In 40 years, we’ve gone from an arrangement where Ottawa made virtually every decision about what infrastructure to build and where, to a process largely guided by Yellowknife.

This is a sort of progress, this new face of federalism in the North. The ability to borrow and spend with fewer restrictions from the feds is a kind of freedom, one that offers the GNWT both flexibility and profound risk. Oddly enough, to use this new freedom it is to lose it. 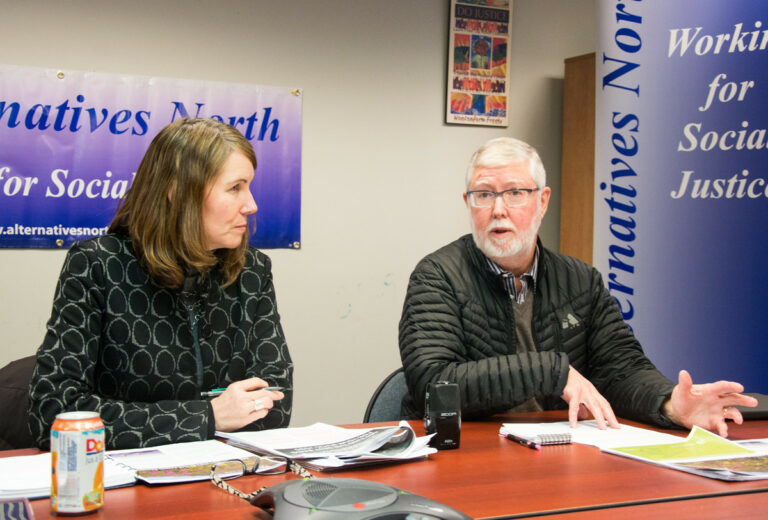