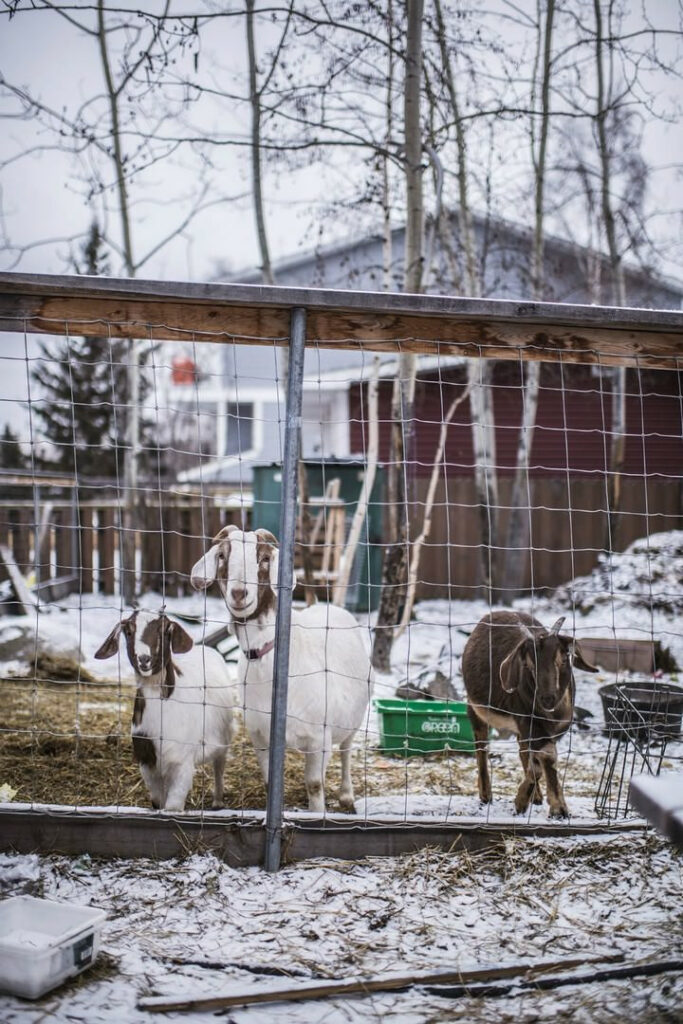 Dwayne Wohlgemuth just wanted a steady supply of fresh goat’s milk when he brought a nanny and her female kid to his Yellowknife home four years ago. Instead, he got a social movement.

The nanny was a Nubian, known to be a good milking breed, but a bout with mastitis severely compromised her milk supply and Wohlgemuth, for all his early morning efforts, says he never got much out of her. At the same time he twigged to another thing about goats.

“I just realized that, apart from milking her each morning, just having them would be a lot of work,” says the environmental engineering contractor, whose house on the corner of 49th Avenue and 45th Street, with its hay-strewn, fenced front yard, quickly became the talk of the town. A tiny petting zoo had improbably implanted itself into the core of a sub-Arctic capital, but people weren’t complaining about smell, or noise, or talking up fears their neighbour might set his sights next on a couple of cows. For the most part, people were falling in love – a bond that would set the foundations for a benevolent, albeit emotional, showdown over the goats’ future.

“Anytime I wanted a social evening I’d just go sit outside by the goat pen,” says Wohlgemuth, who grew up on a farm in northern Alberta and lives with his partner Leanne Robinson and their infant son Emile. “We met so many people from the goats.”

The goats’ celebrity status amongst children and adults strolling by on their way downtown, or in the other direction towards Old Town, was augmented when Wohlgemuth, determined to try milking again, brought up a billy, which led to the birth of two sets of twins. Unable to sustain them all in their small yard, the wholesome, pioneering couple unsuccessfully tried to give some away, and ended up butchering a few, leaving them with a nanny and two kids.

One of the goats’ most ardent fans from the get-go was neighbour Teresa Michalski, who’d stop to feed the animals while walking her dogs. She moved to Yellowknife from her motherland of Poland almost 40 years ago, and has worked all that time at the downtown grocery store, where thanks to store manager Glen Meek, she sources a constant supply of goat food – the vegetable and fruit trimmings that would otherwise be discarded. While she too grew up on a farm and understands the primary role of livestock as protein-providers, she put these goats in a much different category.

“They are beautiful and very smart,” she says. “Here is different. We don’t have that many farm animals in Yellowknife. I never had goats (in Poland) but that was my dream, to really have goats.”

Last summer Wohlgemuth and Robinson began building an off-grid cabin outside of Yellowknife, a task that would take them away from the goats for prolonged periods and necessitated a more permanent solution to their care. They posted a notice on the fence about their dilemma and suggested anyone that might want to goat-sit over the summer drop by on a Saturday at 10 a.m.

“Fourteen families showed up,” recalls Robinson, “and they each took a week.” The nanny goat, however, started getting aggressive, asserting her hierarchy over the newcomers entering the pen, butting and ramming them, and eventually she too was butchered. That left the two smaller kids: the male, which Michalski named Burek (meaning brown in Polish), and the female, Mathilda. And here’s where things start to get tense.

Come September, the intrepid young couple began readying to spend the winter at their cabin. They could no longer shoulder the expense or constant care of the goats. “Everyone knew as soon as the hay was gone, they’d be going too,” says Robinson, who works at Arctic Energy Alliance.

They could use the meat

A distraught Michalski showed up at their door asking what it would cost for her to buy Burek and Mathilda. The goats’ owners, both on leave to spend time with six-month-old Emile, have a strong environmental ethos and strive for a low-carbon footprint. Wohlgemuth has been retrieving virtually all the food items needed to sustain the family from a local supermarket dumpster for several years, with the exceptions of coffee, cream and chocolate (more than six-million tonnes of perfectly good food are wasted in Canada each year, according to an article in this month’s Walrus). They could use the meat.

“I cried because it was $400, and I said it’s too much, Dwayne, I can’t afford to pay that, and then I decided I’d start to ask other people,” says Michalski. Erin Choy, another neighbour who stopped to visit with the goats daily, offered to help. She sold $200 worth of homemade jars of granola to her co-workers at Somba K’e Family Dental Clinic, and donated another $100 herself.

“I just love them so much,” says Choy of the goats. “I’m from Korea, it’s been almost two years living here in Yellowknife. I didn’t have any chance to see goats as my neighbour. It was my first experience. My husband and I went everyday with carrots. We just said hello every morning, and goodnight every night.”

Another friend of Michalski’s, Nicole Latour, agreed to help through social media. After a Facebook attempt didn’t get much uptake, she circulated a gmail account, arcticgoats@gmail.com, where people can e-transfer donations or write for more information. By last week, there was enough money to buy the goats and buy the fencing to erect at North Country Stables, which, under the ownership of veterinarian Dr. Tom Pisz, is now the goats’ permanent home. Pisz, who is also originally from Poland, having grown up just 50 km south of where Michalski lived, picked the goats up Saturday afternoon in his Toyota Yaris.

“We love the goats too and if people want to save them, we’re happy to have them at the stable,” says Wohlgemuth. “Teresa is pretty thrilled.”

“Dr. Pisz says they are a little bit on the heavy side because I chop all the food for them and I think (Burek) was all stressed out, different place, different surroundings, but they are in a nice place, a beautiful location,” Michalski says. As of today (Tuesday), Burek was battling a bit of fever, and was on antibiotics and receiving veterinary care to make sure he doesn’t get dehydrated. She brought him a jacket to lesson his chill.

“I’m still worried about him,” says Choy, who will be stopping by the goat pen regularly when she starts horseback riding lessons soon. Both women have been visiting the goats daily to help ease the change.

A grateful Michalski says if it weren’t for the generosity of many people, including the Chassie family, who installed the fence, her dream of being a goat owner – “They are my goats, they will be always, because I love them” – would not have come true.

Leanne Robinson seems unsurprised by the movement that spared the goats from becoming their next curry dinner. “They were the community’s goats. I don’t feel like they were our goats at all.” 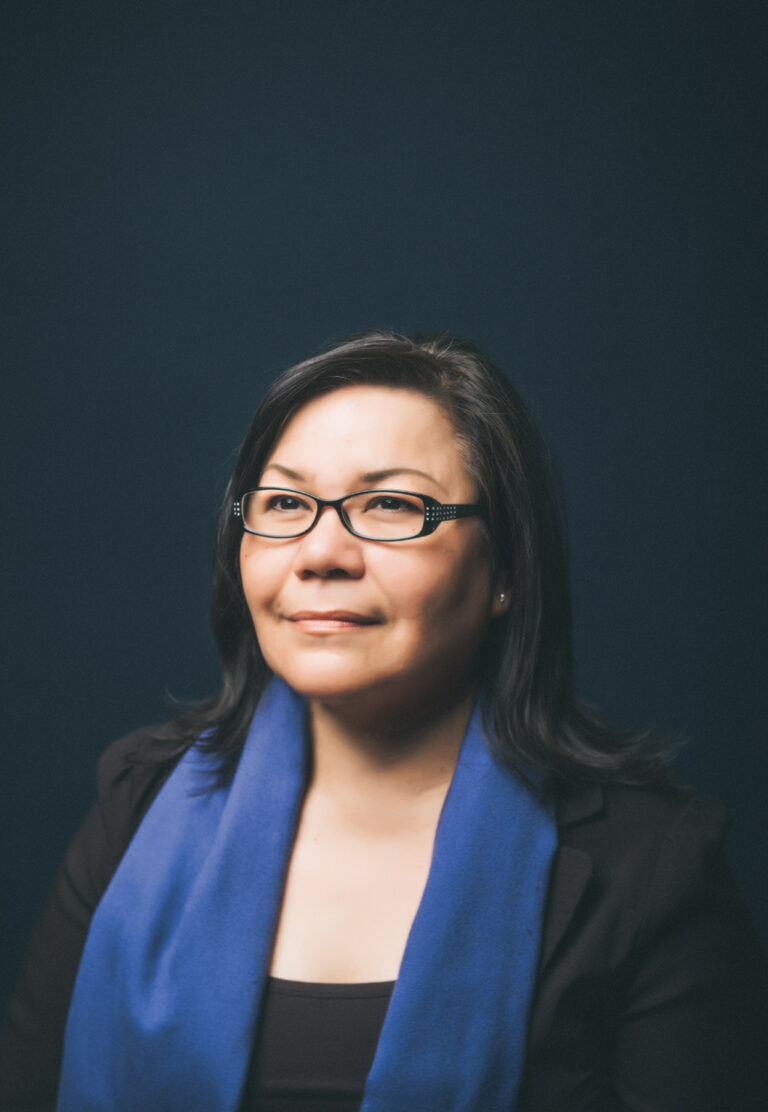