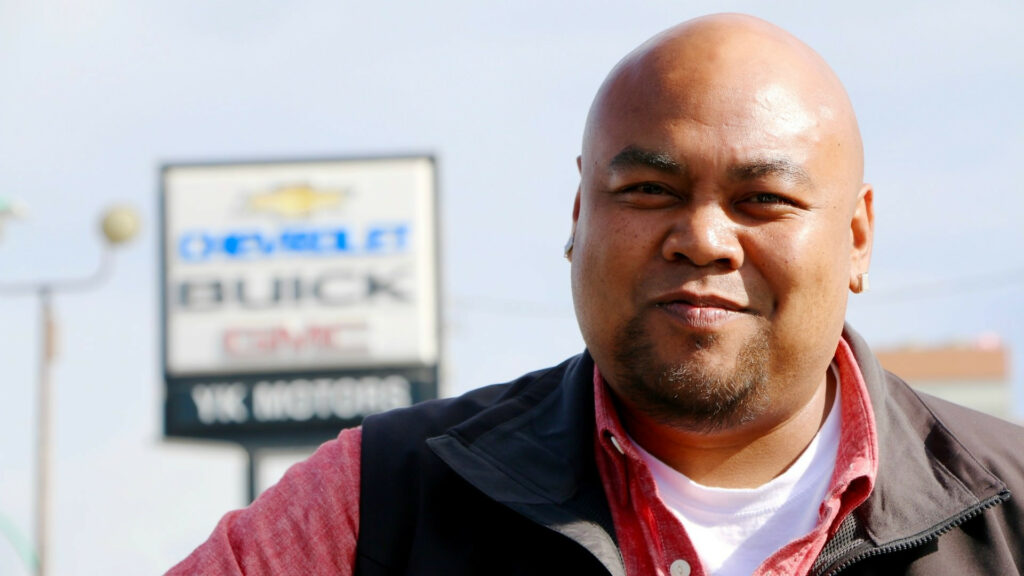 On a Wednesday afternoon with a few, rare, drops of rain in the air, Godson leaves his desk and steps out onto the lot. This patch of pavement is now his stage.

Aaron Hernandez has been Yellowknife’s Godson for two decades, issuing around a dozen rap albums, while performing countless gigs, mentoring programs for kids and appearing on national TV shows like Dragons’ Den and Canadian Idol.

“April 1, I started,” he says, pausing by a Buick. “I didn’t announce it on social media because no-one would have believed me.”

“You are memorizing lyrics, which are the features, benefits and value of the vehicle”

We’re used to musicians reinventing themselves, but over the course of his career Godson has managed to sustain himself in the not exactly thriving world of northern pop culture by taking on a dazzling variety of roles — which in the past few years alone have ranged from restaurants, to youth programming at the Tree of Peace Friendship Centre, to selling you a fully-loaded GMC.

That last switch came about when his Tree of Peace contract came to an end. Chris Blais, who runs the sales operation at Yellowknife Motors, put up a Facebook post advertising a job at the dealership.

“I replied, jokingly, to say I might be available in a month. One thing led to another and I’m here,” says Godson.

“I didn’t let him get away,” says Blais, himself originally a chef before changing gears. “I’ve known him for 12 years — my wife and Godson have the same godparents — and I always knew he would be great at it.”

With absolutely no background in vehicle sales, Godson was packed off to Calgary for training and given weeks of homework before he started the job.

According to the dealership, an established member of sales staff hopes to sell around 12 vehicles a month.

Godson managed 10 in his first month on the job — and actually got 21 people to the point of saying ‘yes’ to buying a vehicle. (In other words, 11 customers tried to buy but were denied by the bank or the deal fell through for other reasons. Bad credit is a phenomenon Yellowknife’s salespeople have to endure.)

A big part of his big start is the social media presence he brings as a local celebrity.

Anyone watching those accounts will have witnessed a steady stream of photos featuring Godson sealing the deal with smiling clients, alongside short video vignettes designed to show off a funny, self-deprecating side.

“I know what it’s like for someone to promote things and promote and promote, and how stale it gets and how force-fed it is,” says Godson.

“The way I go about it is I try to keep people engaged in the product in a funny way.

In the first few weeks, people would occasionally come to the lot to snap a selfie with Godson — no test drive, no nothing, just a photo.

“The way he’s presented himself in the community? The way he is with people? He’s just an all-around good guy,” says Blais. “You’re not going to feel pressure with him — people can relate to that and they’ll feel comfortable buying vehicles.

“He has branded himself. Absolutely. One hundred percent.”

How does it feel to be a rapping car salesman? Not everybody might be able to make those two lifestyles work. (You decide if Drake is succeeding at “rapping phone salesman.”)

“I love it,” Godson insists. “I actually find it easier coming from the performing arts to cars, to sales consultant. It’s really getting the attention of your audience, a.k.a. your customers, your clients.

“I guess you could say it’s a performance, right? You’re showing your skills — in this case, your vehicles. You are memorizing lyrics, which are the features, benefits and value of the vehicle. For me, they actually do come hand-in-hand.

“A lot of people always remember who sold them their first car. This career is definitely going to be long-term.”

OK. So who sold you your first car?