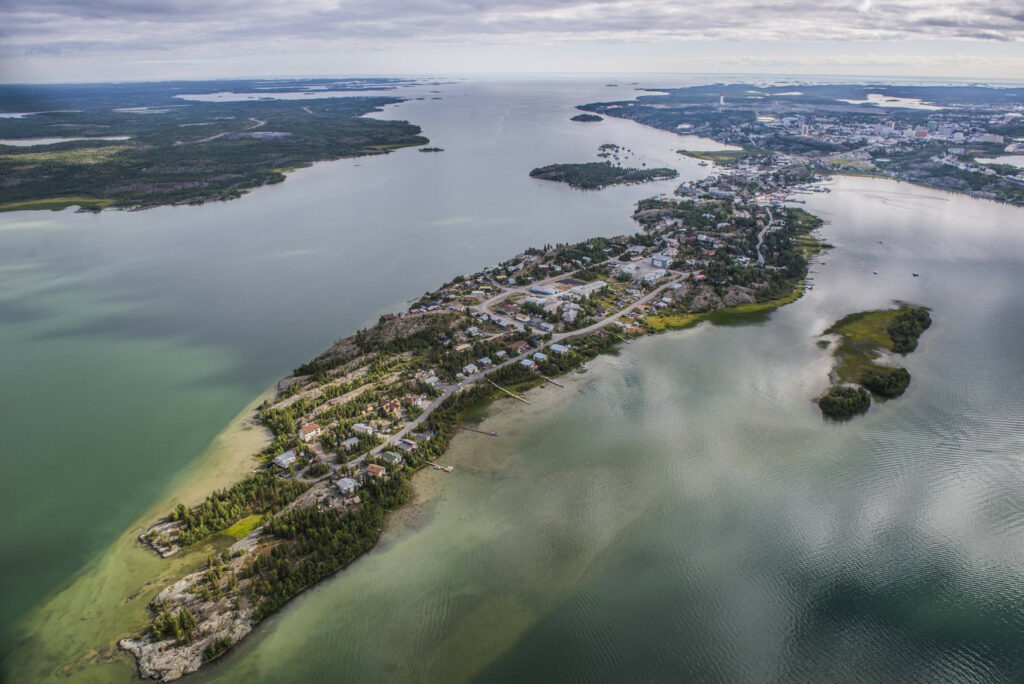 One of the most amazing things about Yellowknife is how small a part its Great Slave waterfront plays in the average Yellowknifer’s life. We live beside the world’s tenth-largest lake, but instead of embracing it, our development and growth has turned around, dropped its drawers, and mooned it.

Aside from a few spots in Old Town, it’s hard to name somewhere easy to really take in Great Slave Lake. Compared with the constant sense of place imbued by Frobisher Bay in much of Iqaluit, the views to nowhere offered by many parts of Yellowknife can make it feel like we’re living in an overgrown mining camp. But while we can’t change the location of downtown YK, we can increase everyone’s access to the waterfront. Can’t we?

Regularly romanticized, the embers of Yellowknife’s nearly extinguished frontier spirit often manifest through plain-and-simple squatting. Although houseboaters are the easiest can to kick, it’s practiced by a surprising range of people, such as the owners of million-dollar homes on Latham Island’s Morrison Drive waterfront, people docking their boats rent-free in McMeekan Channel and anyone who just plops winter toys wherever there’s an open spot of land.

I used to live in a renovated public housing unit on Morrison opposite the waterfront. Out my front window, I couldn’t see the water but could see an overgrown pathway designed for public access. Unwilling to bushwhack, I had to walk through a friendly neighbour’s lot to visit one of the city’s most scenic stretches. With so many private docks, I was shocked to learn it was publicly leased. To voice support for opening it up, I attended a Harbour Plan session organized by the City and was told the most vocal opponents were my waterfront neighbours.

More than five years later, City waterfront wins include removing parked cars and placing suburban driveway stones on the government dock, as well as the development of a miniscule waterfront park.

In the bigger picture, the City appears committed to inaction. The latest political paralysis is Mayor Mark Heyck’s urging council to discard the idea of a walkway and public dock along Morrison’s waterfront after years of opposition from people living there. But really, what type of feedback did the Mayor expect from people whose property values and quality of life would be affected by encouraging the public to visit what they’ve always felt was their backyard?

This news is highly public, but far from the City’s only fail. After stepping over piles of junk while touring the Johnson’s waterfront with owner Les Rocher, I felt disappointed by the City’s inability to gain control over this crown jewel property. And while living on Latham, I drove past the Ward Air dock daily (well-used but once a year for the Beer Barge and every second year for the floatplane fly-in), wondering why no deal had been made to grant regular access.

The combination of a lack of political will, fervent NIMBYism and disinterest by the city’s wealthiest landowners in anything resembling real philanthropy is an incredibly impotent combination. A friend’s favourite Yellowknife slogan is “nobody moves, nobody gets hurt,” which refers to the community’s long-term love affair with stagnation. In that sense, the City’s latest lack of movement on the waterfront file lines up with our dominant culture. It might also explain why the hard work of stepping on the toes of everyone from millionaire Latham Islanders to humble houseboaters to deliver meaningful and inviting public waterfront usage has been largely ignored.

Brent Reaney is a partner in Verge Communications Ltd., which publishes EDGE YK magazine. He splits his time between Yellowknife and Philadelphia, where his wife’s completing a PhD.

A History that Everyone “Knows”