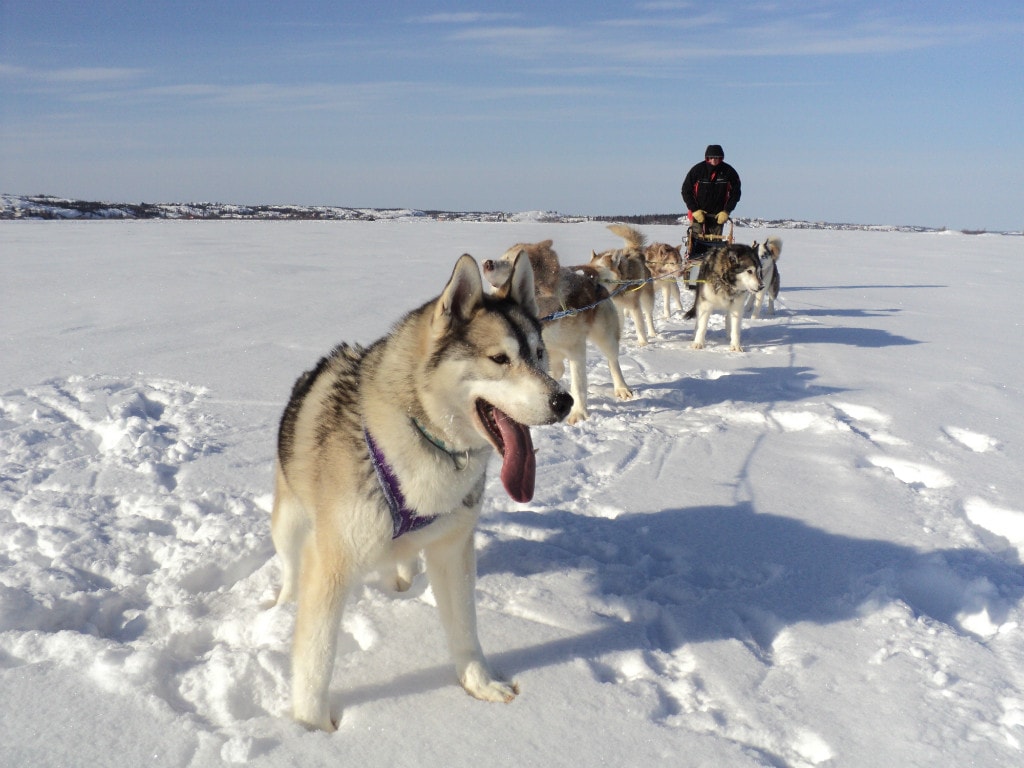 In my dreams, I still see it and shudder. A dark patch of water where there should have been ice. As we slid into it, my lead dog Trigger turned and looked directly at me. It was my fault. I had called the team toward what I thought was just a wet patch of ice. It was a gaping hole.

Over the past 30 years, dog sledding has allowed me to explore  thousands of kilometres of northern bush. This should have been a great season-ender. It still amazes and scares me how the final run of one of my best winters of dog sledding turned disastrous, the dogs, the sled and me under water and ice.

It was early May. The snow had melted and drained, leaving Great Slave  Lake as flat as a parking lot – a parking lot atop of a metre-and-a-half of ice. I passed people kite-skiing, bicycling, kick-sledding and driving trucks on the ice. It was a nice, sunny day and Yellowknifers were out enjoying one of their favourite spring playgrounds, a huge frozen lake.

We sledded about 11 km, then I pulled into the shore and let the dogs run free while I ate a sandwich. I called the dogs in, hitched up and we started back to town. We were not on our usual trail. There was some thin ice in the area, but I thought I had avoided it.

Then we were in it! I surfaced to a tangle of swimming, panicked dogs. I swam to the sled, my winter clothing sodden and cumbersome. I can’t remember how, but I managed to get the water-filled sled back on to the ice and dragged myself up beside it. My windpants were waterlogged and twisted around my legs. In a daze, I pulled them off. All of the dogs managed to get onto the ice and were jammed together in a massive knot. I knew the only way they would get away is if I released them.

As I grabbed Trigger’s line, I felt water at my knees. The ice was sinking under our weight. Suddenly it rolled over, completely pitching us all back into the lake.

Things got a bit hazy after this. I swam over to the dogs, most of whom had scrambled back onto some very weak ice.The sled was hanging vertically under the ice pulling the dogs back. I started to try to pull up beside them, but realized our combined weight was too much. I let myself slide back into the water and swam to the opposite edge of the widening hole.

The cold was sapping my strength. My winter gear was holding so much water I wasn’t sure if I could haul myself onto the ice again. Forcing myself to calm down, I kicked off my heavy boots and managed to drag my body from the water. The ice was heaving under me. I was too frightened to move and wasn’t sure where there was good ice. I knew if I went back into the water I wouldn’t have the strength to get out.

I sprawled on the ice, face down, sobbing. It was so porous that water kept coming through into my mouth. I could lift my head enough to see the dogs, I could hear them whimpering, I knew that some were trapped under the ice and dying.

The ones on the ice were so tangled I couldn’t tell who had survived. Hoodoo, my one black dog, kept sliding toward the water, dragging the rest. Then he would inch his way back.

I didn’t think there was anyone within miles, but all I could do was shout for help. I don’t know how long I lay there. Then I saw a dot moving toward me. It was a woman on a  bicycle. I started shouting to her to keep back, there was bad ice, but I needed help. I was now shaking violently with the cold. The woman kept talking to me, keeping me focused. She told me it was going to be alright, she had phoned the rescue people. We waited. I think I told her they  would need  a helicopter.

Someone else appeared on a snowmobile. Lifting my head, I could see him talking with the woman. He slowly circled the open water then turned and zoomed off. My heart fell. The woman kept reassuring me, kept talking, telling me help was coming. I don’t know how much time passed. The man  with the snow machine returned. Still lying flat on the rotten ice I watched him walk slowly along the edge, scrutinizing it carefully.Then  he pointed to a  narrow  bridge of solid white ice that joined the main body.

He calmly threw me a rope and told me to tie it around my waist. By now I was so cold I couldn’t get my hands to co-operate. I managed to get a loop on myself. I don’t remember if I crawled or how I got to him . Suddenly I was lying down in his toboggan. We stopped beside the woman who put her hat on my head and wrapped me in a tarpaulin. I also remember trying to get up and tell her that the rescue people had to get my dogs out, that they would need pliers to cut the lines. On shore I was loaded into an ambulance and taken to hospital.

I was numb and shaking violently, but my core temperature hadn’t dropped to a dangerous point. My wife arrived and told me the fire department’s rescue squad, wearing full immersion suits, had managed to go into the water and pull the dogs out.Two had died, one was under the vet’s care and the remaining four were being taken care of by friends. I started crying.

At one point, my wife asked the nurse if I was on a vibrating bed. The nurse said, “No dear, it’s just him shaking.” She also told me that the next day I was going to feel as if I had been thoroughly beaten up because all my muscles were contracting and shaking. She was right.

I learned later that the woman, one of my neighbors, was bicycling on the nearby ice road with her children and their friends. It was the children who heard my cries for help and alerted her.

The man, Vic Waugh, the woman Shawne Kokelj, and the children, Makoa Kokelj and Wren and Sage Acorn were awarded citations for bravery. I am forever grateful to them and the city fire department.

I recovered fully with no physical damage, but I lost two good dogs: Django, a big-hearted, 13-year veteran, was going to be retired after that run, and Foxy, the team clown. I’ve had about 50 dogs. Some have died naturally, some of disease and some Iʼve had to put down myself for various reasons.The loss of Django and Foxy disturbs me more than losing any other dog. It was directly my fault. I still hear them thrashing and whining in panic.

My team has the five surviving dogs and a couple of additions and we are happily back on the trails again. I never once considered quitting dog sledding. For me it’s the reason that winter was invented. The dogs’ joy running those trails is matched only by mine.

Trigger is still my lead dog, the best I’ve ever had. If he had reverse I could parallel park the team downtown. He still sometimes gives me questioning looks about my directions, sometimes even delaying a turn until he finds what he considers a better route.

But we get where we need to go. We’re a team. 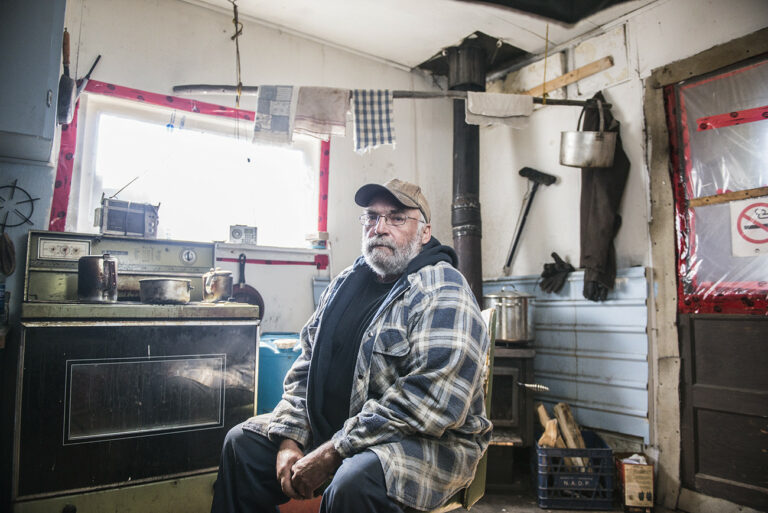