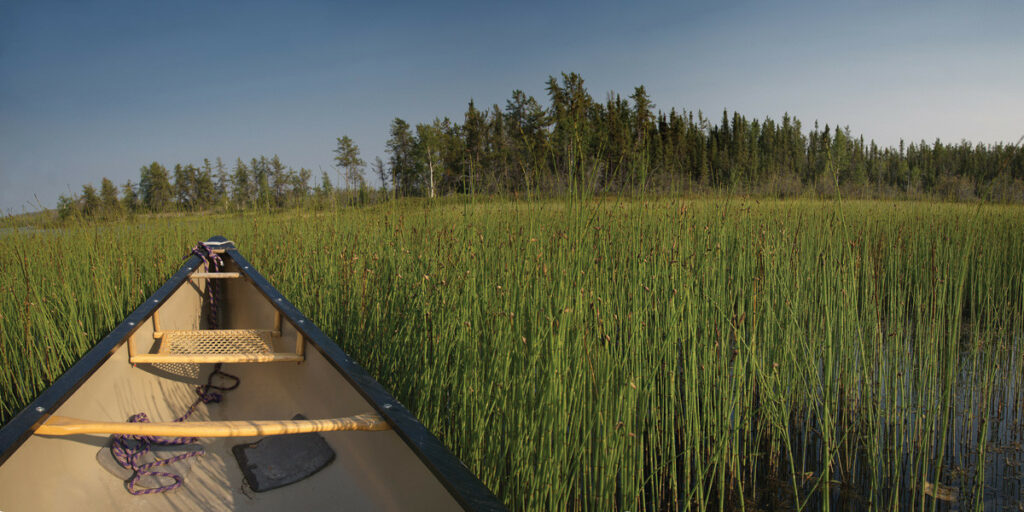 One of Yellowknife’s greatest assets is its abundance of water, which so many of us take for granted. Some never contemplate how fortunate we are that our city is situated on one of the greatest fresh-water lakes in the entire world, where you can still fill a cup almost anywhere to safely drink from its waters.

For me, especially at this time of year, there is a beckoning call to be out on the waters of Great Slave Lake, knowing of its immeasurable beauty and nearly limitless possibilities for exploration – places such as the North Arm’s myriad islands, or the vast, sweeping bays of the East Arm with its deep turquoise waters. After spending a few lifetimes on the “Big Lake” one might begin to know something of its mysteries, but there is no need to travel to the East Arm or the North Arm to get a sense of it.

On our very doorstep, both Yellowknife and Back Bays offer anyone with a bit of boating skill (self-propelled for the purposes of this article) adventure, relaxation and a place full of wonder and discovery. Both bays have a magic that many Yellowknifers and visitors never discover, and yet within ten minutes of paddling from the Latham Island causeway one can find, for example, places and things sacred to First Nations people, artifacts from early mining and aviation days, memorial and grave sites, and viewpoints from which to observe wildlife (I’ve seen mink, weasel, otters, bears, swans, eagles and other creatures).

On the water – by canoe, kayak or paddle-board – one can glide silently along and feel the rhythm of the lake’s big waters, especially if you get far out into Yellowknife Bay, feeling her waters roll under you, buoying you up then settling you back down, listening to waves break on a pebbly beach or washing over the toes of a rocky point running down to the shore. You can catch the scent of fish on the wind and stare off to distant horizons with nothing but water to see. You may be fortunate enough to see an eagle or an osprey, or have a loon cry out as you sit suspended over the depths.

On the eastern shore of the Yellowknife Bay you can pull up your boat and feel a long way away. The woods seem untouched in most places, and depending on the season there can be berries or mushrooms to be found; a spot to have a cook-out, to cast a line, to swim and to lay out on warm rocks.

On the western shore you can paddle south from the tip of N’dilo and find etchings in lichen with names of children who have grown to be chiefs and leaders, and brass plaques to lost warriors whom few now remember. Still plying south you’ll come to the floatplane bases and see dockhands scurrying back and forth, planes moored and others taxiing into the wind to lift off to places unknown.

Across from there is Joliffe Island, once a tank-farm and now the epicentre for the houseboat community. Dotted mainly about the southwest shore, the little houses bob up and down on their floats, and creak and tug at their mooring lines. Paddling about this little community is a study in ingenuity, architecture, and esprit de corps. If you pass west from Joliffe and then under the Latham Island Bridge you’ll now be in Back Bay. Residential homes line the east and south shores, protected from the bluster of the big lake. Generally having calm waters, Back Bay makes for serene paddling that offers the boater a new perspective on Yellowknife’s oldest neighbourhoods. From the water’s edge not only can you survey the varied architectural styles of homes, you’ll also see many of Yellowknife’s most iconic commercial buildings such as the Wildcat Cafe, the former Canadian Pacific Air site, and the original Weaver and Devore store. Despite the fact that almost all of both the eastern and southern shores are residential areas, there is still enough natural harmony maintained by its residents (and the City) that paddlers are bound to see plenty of songbirds, waterfowl, raptors, and even small mammals rarely seen in other parts of the city.

On the west shore of Back Bay you’ll find one of its most venerable sites: The Back Bay Cemetery, where some of Yellowknife’s earliest pioneers are interred. Paddling north from there the shoreline guides you beside large outcroppings of rock which soon lead you to the head of the bay where you’ll find the old residential site for Giant Mine employees and the harbour site for the Yellowknife Yacht Club.

Although I sometimes yearn for the waters of a fast flowing mountain stream, or the challenge of an extended trip on the clear waters of a tundra river, nothing can beat a sunny afternoon’s outing on the Great Slave!

Bill Stirling is co-owner of Overlander Sports along with Sandra. When not at work, you may find him on the water or on the trails.