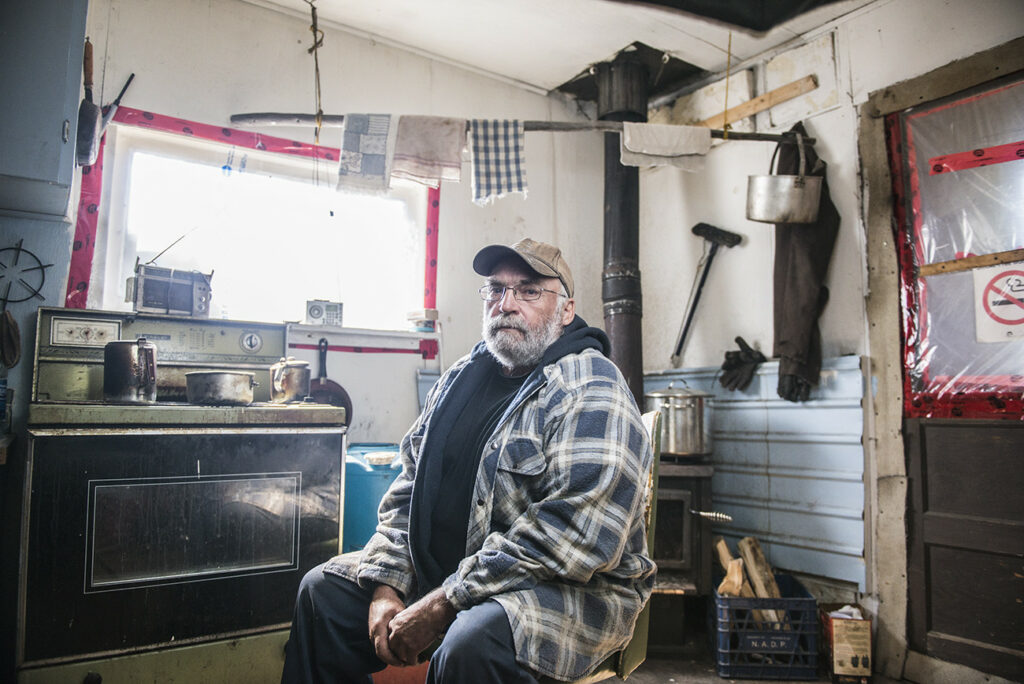 Among the books, tools and knick-knacks of Larry Galt’s plywood shack out along Highway 3 is a photograph of young Larry, bushy faced and bleary eyed, flopped over the wheel of a 1960s Pontiac. What the tightly cropped photo doesn’t show is the surrounding mayhem of a legendary Woodyard party, nor the fact that Larry and his car are rolling towards a sizable bonfire.

“If my car’s going into the fire I’m going to be behind the wheel,” says Larry, holding the photo with childish grin on his face. The old bushman, prospector and recovering alcoholic clearly made it out of the car that night. But as with many of his more notorious party stories, he’s fairly slim on details.

“All those people are still around, so I can’t talk with that thing on,” he says pointing to the recorder. “But suffice it to say that there was RCMP, bylaw and the fire department involved and they couldn’t do anything so they just let us go.”

There are other photos in Larry’s shack showing him and his longhaired buddies back in the ‘70s and ‘80s, when Larry lived on houseboats and in the Woodyard, rolled with the Northern Breed biker gang, and disappeared into the bush for months at a time, cutting lines and staking claims.

The parties were certainly wild, but it was also a community: “Little kids would come in, it would be a rip-roaring party, but they were totally safe, everybody respected that, and if they didn’t, they weren’t allowed in the Woodyard and we weren’t any too gentle in ejecting people either. We played hard, we worked hard. That’s kind of a legacy from the old timers, and they liked to see that. It’s just we had long hair and smoked dope and drank and fought like the best of them. It was good.”

Larry came North from Red Deer, Alta., in 1971, 19 years old and fleeing a girlfriend: “She was getting a little possessive so I got out of Dodge. She even had the little Afghans named.”

His first job at Con Mine lasted only a few months before he got bored and took off into the bush, firefighting, prospecting and roaming Great Slave Lake with buddies for months at a time.

“I tried going back to the south country twice and it just didn’t work. I just didn’t like where I was. Right from my earliest memory, this is what I wanted to be doing: being out in the bush, fishing and hunting and trapping and traipsing around. That’s what I’ve done up here, I’ve been in mining exploration for 30-some years. And I added it up, I think since 1971, I’ve lived with running water 11 years, not much more.”

His life took a major turn about a decade ago, when he finally quit drinking with help of Yellowknife’s Alcoholics Anonymous. “I was unable to do my job. You’re half-cut all the time or piss-drunk for months and months. The time slips away when you’re in addiction, and I finally came to terms with that. Luckily I had a place to stay, and Carl and Mary Ann [Williams, on whose property he stays], they just accept me the way I am.”

Since being sober, he’s got back into riding motorcycles. And in between jobs hauling and operating heavy equipment, he spends as much time as he possibly can riding his Harley Electra Glide or out in his boat fishing.

“It was my time to quit. When it’s your time it’s your time. Now I’m doing all those things I always talked about. You just got to work at it and never give up.”

I mean there was no pavement past Manning then and it was Easter of ‘71, so the road just got narrower, things got rougher, and people got friendlier.

I blew a hole in the gas tank in Enterprise and ended up selling my car to a feller down there. I’d met some people in High Level driving up here, so they threw me in and up we come. I didn’t have much, just a bag, I sold my stereo to the guy.

I was staying at the Traveller’s Rest and phoned my buddy Ken. That night he says, ‘Well, let’s go out to a dance.’ And I said ‘Why do I want to go to a dance on Sunday night, there’s no booze.’ ‘No, no,’ he says, ’You’ll like it.’

So we go out to the Con rec hall, sitting there, and there’s people there all happy, I can’t figure that out. Then at one minute after 12, the door opens and the booze is served. I thought, ‘I am home! I have arrived!’ I was singing and dancing, and figured I’m in the right spot, because that’s what I wanted to do, I’m an alcoholic, that’s what we do. And people said, ‘Here’s another haywire, he’ll get along in this town.’ And I did.

Just the freedom. I got Great Slave Lake there. In my life I’ve had to have mountains of big water close by, and this fits the bill here. The freedom: I can load up, go to Giant, put in and not come back for a month or two. That’s what we used to do.

We used to just jump in the boats, never file a plan or nothing, just load up and go. Run out of food, we’d come back to town. We were running just ten horses so we didn’t go anywhere fast, but we got somewhere every day. Saw most of the lake. I haven’t been around towards the mouth of the river, but I’ve seen most of the rest. Some pretty wild adventures, weather, breakdowns, leaky boats. We lost quite a bit of shit.

The politics is starting to get to me. The City administration has always been there, and there’s been the puppeteers, they call themselves mayor and council. But in the old days the power structure was fair, you know.

It isn’t that way anymore; bean counters and lawyers are taking over and we’re all going to hell in a handbasket. I’m just doing my way to resist that, trying to live a clean life. You know, like any frontier town, we were opened up by bandits and misfits, it’s the end of the road right, so we obviously had a hard time making it elsewhere or we’d be elsewhere. But this is where we found this freedom.

When I moved out here in ’99, you know Carl’s a trapper, and he had a trapline across the North Arm at a place called McIver Point, and he wanted to go trapping and I wanted to learn trapping.

So we ended up down in Birch Creek in a little cabin, working out of there, and then just started working the old cat road from Hay River. It was an overland route, so they didn’t have to go over the big ice, and it hadn’t been used for years. So we worked really hard there, kept picking away at it; drive down and stay there for a few months on the trapline. You’d only take so much gas and grub, then you’d come back, do a quick trip then hit it again.

We set for pine marten. I’m just along for the ride, I cook and break trail while Carl sets the traps. We’re still doing it, though we lost a cabin last year in the fire. We went and scouted that out last winter, looking for a place to build, but we’re waiting till fire season’s over this year.

I like biking and boating, but the last couple of years people have been interfering with work. I’m going to work tomorrow at Snare Hydro and did a couple jobs last year. It kind of screwed up my biking season. But you know I’m close to retirement and this looked like it would be a four- or five-month job. I was asked to by a friend so I said yes. Next year I’ll bike and maybe go to Australia in the fall, that’s been on my bucket list since I was there.

Just this. Where your boss can drive out to your place, and you throw all your shit in his truck and go jump in an airplane and go to work. I got no running water, so I just give my food away, empty the honeybucket, lock the door and that’s it. Come home, it’s 40 below, well, I got wood, I got an oil stove, everything’s good. Winter time I don’t worry for water because there’s lots of snow.

I always figured I’d retire like this, so I must have started early.

Pretty much. Though like I say, you never know. Never say never. Never is the same length of time as forever. And you never know, some good lookin’ tomato might just drag me off to some foreign land. I’m good with it!