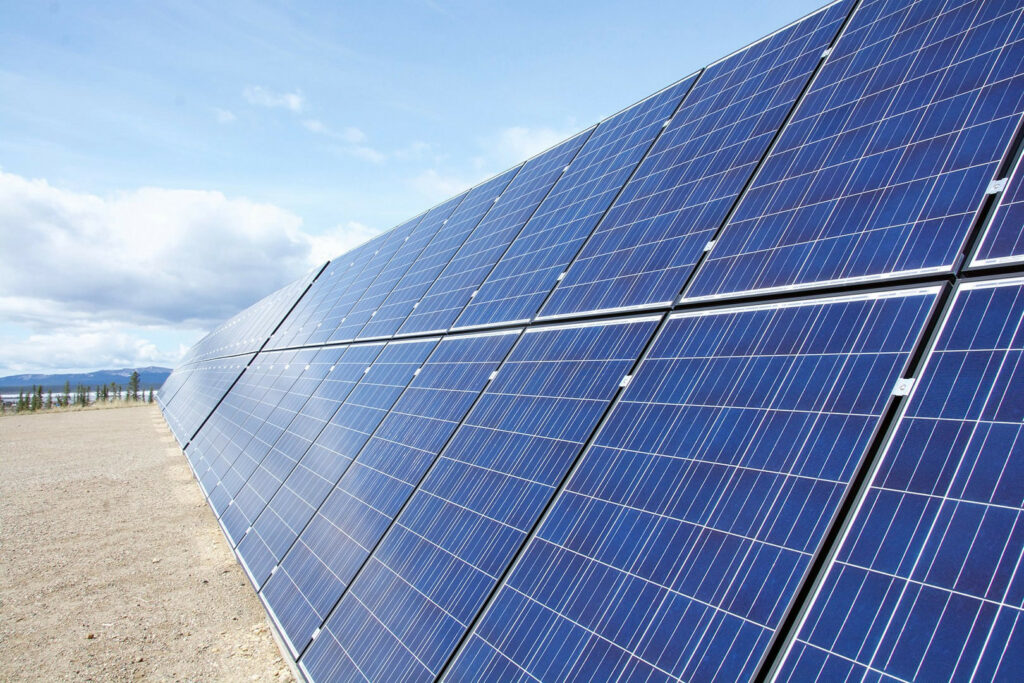 Colville Lake's solar array is different from those in other communities

“The first time we flew in, we lost a tire and had to push the plane off the runway,” says NWT Power Corporation engineer Gilles Ringuette, as we bump along Colville Lake’s former airport runway in a new Ford pickup.

“You had to bounce off the hill just to take off,” adds Bernard Blancha, who has just picked us up at the new airport — still gravel, but less hard on a Dash 7’s tires — over on the other side of town.

Blancha is from Colville Lake and works in the new power plant built at the far end of the unused runway. Off to the right, the hamlet of some 160 residents sits across a narrow isthmus between a small lake and the much larger one from which the community gets its English name. Ahead of us are five long lines of solar panels tilted up at 45 degrees towards the sky — the reason Premier Bob McLeod, NWT Power Corporation Minister Lou Sebert and an assortment of territorial power grandees are in Colville Lake this afternoon in late May.

Moves like these are taking place across the territory, and it’s likely that advances in renewable technology will play a significant part in making communities more sustainable and self-supporting.

“How were the caribou this year?” asks someone in the truck.

“Not like a long time ago, when they used to walk right through,” says Blancha. “They got smart. The wolves moved in.”

“At least [you guys] brought Chinese food. Everyone is talking about it,” he adds with a laugh as we pull up to the new power plant — two large diesel tanks, some outbuildings and several sea-cans that have been welded together.

Twenty-six years ago, if you wanted to watch Home Alone or Pretty Woman in this tiny Sahtu community some 50 kilometres north of the Arctic Circle, you had to tromp outside, even in -40, and give the Honda generator a good rip. Then, as today, many of the houses were wooden, built in the log-cabin style started by painter-priest and community founder Bern Will Brown back in the 1960s that gives the community a sturdy, picturesque air. Through the winter, Coleman lanterns and the glow of wood stoves provided most of the light. The old diesel plant was built in 1990, making Colville Lake the last community in the territory to get electrified. But as with other communities accessible only a few months a year by ice road, the cost of bringing in fuel has always been high and the engines temperamental. An average year saw dozens of outages, says David Codzi, who’s lived in Colville Lake for much of his life, and is managing its move towards self-government. The plant once spluttered out for two weeks in the middle of winter. By the end of its run last year, the floorboards were soaked in diesel and the engines, famous for their chug and whine, were in serious need of an upgrade.

Enter the new $7.9 million diesel-solar system, completed earlier this year, and officially unveiled two Wednesdays ago by politicians in hard hats, a photo-op and a media junket, which we were invited along for.

It might seem odd, that a small power plant in a very small community of dirt roads and tippy boardwalks to keep you out of the mud this time of year, should get the full premier-and-ribbon treatment, an event that took months to plan and was run by a third-party communications agency. But then, Colville Lake’s plant isn’t like the other solar arrays popping up across the territory.

While the solar panels being installed in other NWT communities usually supply significantly less than five percent of their community’s power, in Colville Lake upwards of 20 percent of the settlement’s electricity is expected to come from the sun annually. And based on numbers coming from the first quarter of 2016, NTPC engineers estimate the community’s annual diesel consumption will drop by 80,000 litres, or 40 percent. Some of this drop has to do with more efficient engines, some of it has to do with the expansive 136.5 KW solar array. The key, however, is the way these pieces fit together thanks to the use of batteries and computers.

“In basic terms, what the computer system does, it stacks the generation into three priorities,” NTPC president and CEO Emmanuel DaRosa tells our group, a mix of technological innocents and electrical engineers, as we gather next to the Lego-looking power plant for the ‘official’ tour. “The first priority is the solar panels, it’s number one. It wants to put the solar panels on first all the time; number two is the battery bank, so when the solar [goes down]… it drops off to battery and tries to deliver the community’s energy needs from the batteries; and number three, and lastly, is the diesels, but it does the diesels a little differently.”

“If you think about it in terms of your car,” DaRosa continues, “if you drive your car about 90 km per hour you get ideal fuel efficiency, whereas if you’re down to 30 km an hour, 20 km an hour, 10 km an hour in a small community like Colville Lake, your fuel efficiency drops right off. So what this plant does is allows the diesels to run always at that 90 km an hour for those engines, so they produce at peak efficiency.”

Still not clear? Think about it this way: some 87 KW of solar energy are raining down on the nearby solar panels while DaRosa is speaking. Down the hill, the town is using around 85 KW of power. This means the extra two KWs are feeding into the dozens of batteries stacked on top of each other in a white sea-can with a humming air conditioner. If it was mid-winter and the diesel engines were running full bore, energy produced but not eaten up by the town would likewise go into the batteries. Herein lies the nifty see-saw engineering that could prove a technological gamechanger: excess energy is captured for future use. The plant, which delivers new efficiencies thanks to the use of batteries and computers

Both politicians present certainly seem pleased with the design. After the tour: the “priority of this government” speeches.

“I was here last summer and the chief took me out on the lake and we had a really good day fishing…” says Bob McLeod, through a crackly PA system, to the 50-odd people gathered in the small community gym with peeling paint and stage lights hanging from the roof for concerts, shows or dances — elders in headscarves and caps who need North Slavey translation, teens in flat brimmed ball caps, kids crawling about under the tables, clearly having more fun than everyone else.

After the speeches, caribou stew is served with bannock.

“A lot of people moved here from other places because they wanted to get away from the government,” says David Codzi as we sit eating the stew.  “If you can’t find a job in town, you can always go out on the land, still provide for your family.”

“We’re the most traditional community in the territory,” he adds proudly. Every year, the majority of people in Colville Lake, everyone not keeping the lights on or the stoves primed, flies 100 km out to Fortune Lake for a week to a ten day long community hunt. Some 90 people, young and old, are out there hunting caribou, with one plane doing round-trips and a few quads and boats to move the meat. This time of year, as the ice begins to crack and the birds return north, the community is hunting ducks and geese, says one young man with a shy demeanour and a cell phone in hand — with the town finally getting cell service last year, a cell phone seems as essential an accessory for young people as a quad.

“Because we’re the last to develop we have vast choices,” says Codzi.

One of those choices was pushing for a novel power solution. Another was purchasing a mobile lumber mill, which will allow the hamlet to produce its own lumber. Moves like these are taking place in communities across the territory, and it’s likely that advances in renewable technology will play a significant part in making them more sustainable and self-supporting. It has to be said, however, we’re not quite there yet, at least from a price-point perspective. NTPC only put solar panels into Colville Lake because they received $1.15 million from the GNWT and a further $150,000 from the federal government to do so. Otherwise, even with the cost of transporting fuel, it would have been cheaper to just run diesel.

“The marginal cost of diesel comes in at about 32 cents a KW/hour,” DaRosa explains when we’re back in the Yellowknife airport at the end of the day. “When we can produce electricity from the sun at less than 32 cents a KW/hour then… we’ll be putting up solar panels everywhere, because that’s a lower cost.

“[Solar is] about double the cost, so we’re about 60 cents,” he continues; much of that comes from the high cost of the batteries. “But look where solar has come from… $20 a KW/hour 15, 20 years ago, to being almost on par with diesel generation today, so it’s actually very close.”

And it’s not only solar that NTPC and the GNWT are eyeing up.

“Wind in Inuvik has the potential to displace a significant amount of diesel and Inuvik is the single largest thermal community in the Northwest Territories,” says DaRosa. “It represents about 40 percent of the diesel consumption for electrical purposes for our customers.” 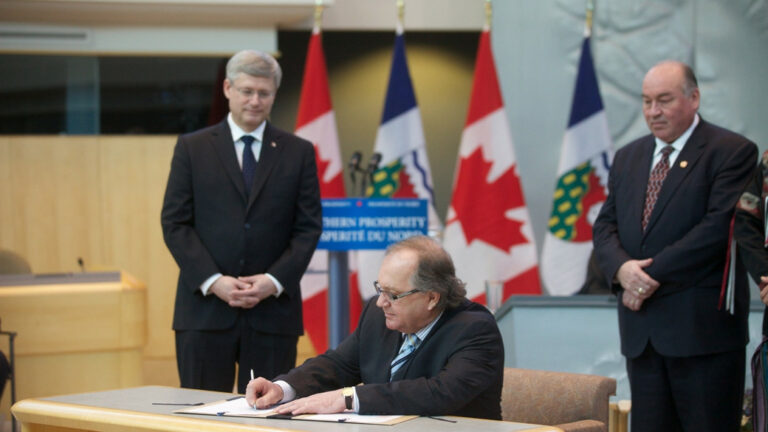 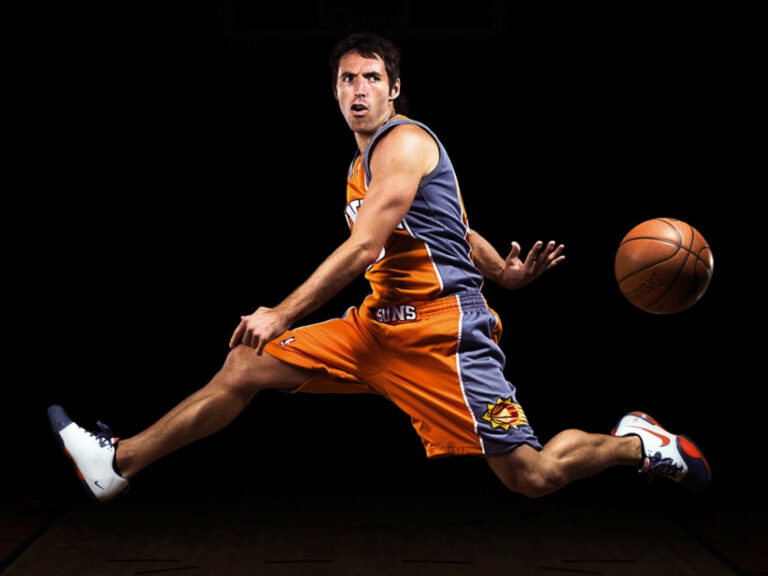 Nash’s Legacy Reaches All The Way To The NWT