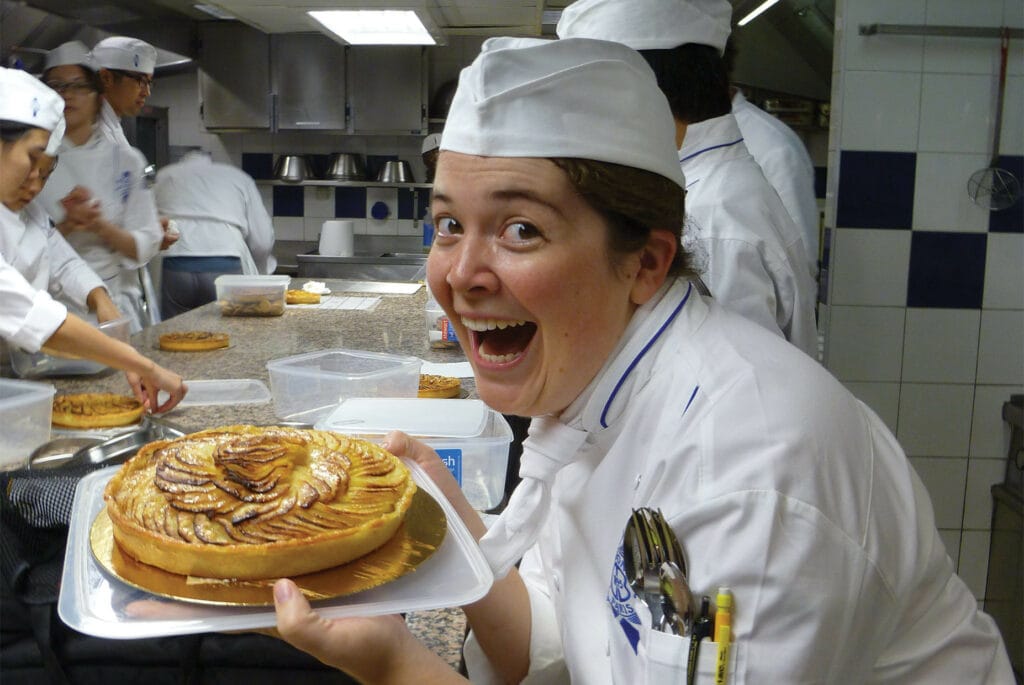 Jesse during her Cordon Bleu training in Paris

Typically, when I recount my tale of leaving Yellowknife to study at the prestigious Cordon Bleu institute in Paris, people’s eyes twinkle with visions of champagne and caviar. In actual fact, I was living the stuff that blogs are made of. I ate foie gras more times than I could count. I learned delicate techniques from award-winning chefs and spent nearly two years walking through historic avenues graced by some of the greatest intellectual and cultural minds of European history. Yet my time in Paris, followed by three years working in Yellowknife’s culinary industry, has not been a dreamy adventure in luxurious ingredients and gastronomic artistry. When you pull back the curtains of celebrity chef culture you reveal a truth that goes deeper than anything the Food Network calls a nightmare. You see a hot kitchen where people work hard hours for little pay and no benefits. You see the realities of an unforgiving industry.

I arrived in Paris in August of 2012. I quickly found myself at the base of the iconic tour d’eiffel, miniature Dachshund, Schnitzel von Krumm, in tow. Staring up at France’s best-known monument, I felt I had found the Paris of my imagination. The school too had a cultivated sense of old French cuisine with blue and white tiled walls and wide grinning chefs in tall white hats, arms outstretched in welcome. Still, in true French culinary tradition, sexism and even racism were also part of the ambience. Raised eyebrows and knowing glances between the students across the kitchen were typical reactions to racist pet names. At times it was hard to tell whether the culture was overly chivalrous, or passive aggressively sexist – one could either manipulate it to their advantage or go crazy being the squeaky wheel in a room full of deaf ears. I remember my friend’s response to a male student’s outrage over some mildly offensive comment. “I’m an Asian-American woman. If this is the first time you find yourself offended, count yourself lucky and continue with your work!” Right or wrong, we were there to learn the art of cuisine from the masters; and a French kitchen is a sphere not yet touched by the terminally P.C. I do believe a French kitchen is also, above all else, a place where hard work breeds respect and mutual support regardless of race, sex, or religion. It’s perhaps one of the few remaining meritocracies in the modern world. No matter who you are and where you come from, if you pull your weight, you’re supported in kind. Not much else matters in the heat of service.

My internships were marked by long days and nights of backbreaking free labour. The stainless-steel, Michelin-star kitchen of Frederic Simonin became home for my last four months of Parisian life. We worked five days a week, 16 hours per day. There were moments I came close to collapsing with exhaustion. But my relentlessly cheerful, and yet somehow bitingly sarcastic, chef de partie would say, “Aren’t you lucky Jesse, you have the opportunity to learn twice as much, twice as fast!” And it was true, I wouldn’t have left that kitchen early for anything. It was the most amazing place I’ve ever worked, in any industry.

Like clockwork, every day we completed our tasks for the artfully crafted menu, knowing that everything must be perfect. One mistake could mean the loss of a coveted star. No one knows the identity of Michelin inspectors, or when they plan to visit. I began picking thyme leaves individually off the stem and measuring and cubing butter. By the end I had earned a place filleting and deboning sardines, frying endless miniature onion rings as garnish, making foie gras ravioli and assisting the pastry chef in service. In some small gastronomic sphere, what we did mattered and had great purpose for the art and culture of cuisine. I left with a job offer from the restaurant, which I regretfully declined due to a complicated work visa and the cost of repaying student loans. I needed a northern paycheque. The author during her Sugar Sculpture exam

It wasn’t hard to come back to Yellowknife. Although I originally moved up on a whim, I have never felt so at home. In 2010, the wild ingredients of the North became my first culinary inspiration. While in Paris, I looked to chefs around the circumpolar world, like Magnus Nilsson, for ways to pair gastronomic techniques and flavours with the bounties of the boreal and Arctic regions. I was painfully aware there would be a change to the food culture in which I would be working, but I came home willing and hopeful to find employment that would allow me to be passionate and pay off my student debt.

The challenges here were more than expected. Full-time employment was actually much harder to find, and pay was more than Paris (not difficult), but less than I needed to cover basic living expenses. Benefits were nowhere to be seen. While the average food professional was passionate and talented, there were some that shocked me. One “chef” with whom I briefly worked avoided cleaning at all costs and attempted to convince me a grill became “seasoned” by not cleaning it daily, or even weekly. I would like to clarify that this technique works perfectly if your preferred flavour profile is “burnt,” otherwise daily cleaning is necessary and sanitary. I tried working at various sit-down restaurants, as well as retail establishments, and regularly had offers from other restaurants. I rejected them because they often had reputations for high staff turnover, something that goes hand-in-hand with a harsh work environment. I was employed, but ultimately I wasn’t happy. I wasn’t cooking what I wanted and I questioned daily why I left my old life in Paris, and even my life before cuisine.

What irked me above all else was that in an industry that pushed me harder, faster and longer than I had ever experienced, I had never felt so disrespected and dismissed by the clientele and employers. I often had my intelligence and abilities questioned. I was expected to work at an unreasonably fast pace to cut down my paid hours, and meal and washroom breaks were usually wishful thinking. My choice of occupation seemed to have instantly placed me into a social class I naively believed no longer existed.

In myself I began to notice a distinct personality shift from hopeful and optimistic to jaded and caustic. I was far beyond trying to appease the world. I went from keeping a sketchbook full of food ideas and sources of inspiration, to collapsing at home in a puddle of dull exhaustion. At the Farmers Market

However, within a year I found professional solace in the Yellowknife Farmers Market, an organization designed to foster business growth. I was able to start my own business, Cloudberry, which freed me to design my own menu and branding and forage for my own ingredients. My most popular items were wild morel and cream puff pastries, reindeer sausage rolls, chamomile eclairs, birch syrup marshmallows and wild rose and raspberry macaron. I had a built-in customer base to allow for easy growth and expansion into catering opportunities and cooking for people with food sensitivities. Although I had amazing clientele and was optimistic about my business’s future, I was exhausted all the time.

Soon an ache throbbed in every joint and muscle, lasting the entire Wednesday (post-market day), and gradually extending into Thursday. My back began to show chronic symptoms of pain and pinched nerves, which caused numbness in my arms and fingertips. Finally – my white flag of surrender – I sustained a shoulder injury making puff pastry that turned into a torn rotator cuff. I couldn’t afford the basic selfcare I needed without working more. The more I worked, the more broken down I became.

I tried to diversify with office work and became acutely aware of the systemic disrespect of culinary professionals. People disregarded my Masters degree in Modern Religious Art, as well as my project management and the administrative experience I’d gained previous to my departure. They focused solely on my culinary experience and laughed off the past four years of my life. I was disheartened. For the first time in my life I doubted my ability to be independent.

I started managing a local band, Digawolf, whose lead singer I had come to know as a friend. It has been a great partnership, as he was in need of administrative support, and I needed a non-culinary outlet for my working life. Over time, I took on a larger role and I enjoy the work, it somehow matches my skill set and interest in the arts perfectly.

Shortly after I began working with Digawolf, Folk on the Rocks hired me as Hospitality Coordinator. Essentially the job was to organize food and hospitality for visiting musicians at the annual summer festival. My eclectic body of experience made me strangely suited for the position. Finding that job, though not a full time position, has given me hope there are more oddly unique employment opportunities for the occupational anarchists of the world – those with atypical skill sets who don’t often find recognition, acceptance or enjoyment in the average 9 to 5.

This has freed me slightly from the physical burdens of full-time work in the kitchen. Many people question where I am now after venturing in and out of the culinary life. I would say with a dream fulfilled, a broken body, a bruised yet healing spirit and a bank account that is much the same. Through my frustrations with the culinary industry, I see the food culture growing in this town because of several dedicated and hardworking teams of people. I genuinely appreciate and thank them for this, because I understand the personal sacrifice that goes into providing good food to a hungry public.