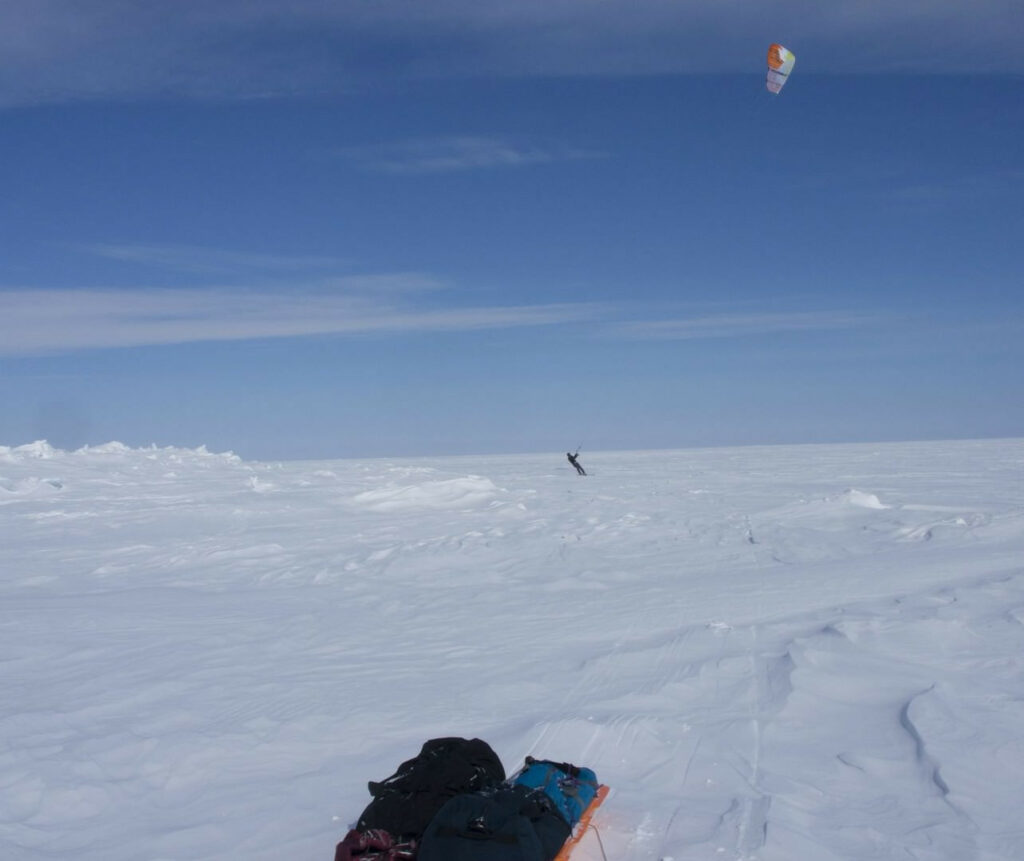 If traveling whatever way the wind blows is your style, there’s no better way of touring the outdoors than kite skiing, says seasoned expeditionist Eric McNair-Landry.

“You can leave your door and, depending on the wind direction, just choose different destinations,” he says.

McNair-Landry and his friend John Blyth from Fort Smith spent the weekend doing just that, being pulled by kites across Great Slave Lake from Yellowknife to Hay River.

Starting on the Dettah ice road, the duo made their way down the North Arm to Hay River’s beach around 200 km away in just over two days.

Setting out in the afternoon on Friday, the two were quickly hit by the same blizzard that saw flights cancelled and vehicles forced to make their way through dangerous whiteout conditions. They decided to hunker down for the night after 30 km into the North Arm rather than continue in the fierce winds and poor visibility.

“The storm got a bit too strong for us to travel in low visibility,” says McNair-Landry, who noted that even when using their smallest kites, they were still getting lifted off the ground by the gales.

“It wasn’t worth travelling in those conditions, and there are quite a few pressure ridges on the North Arm,” he says. “It didn’t seem to make any sense to travel in the storm.”

On Saturday, however, conditions were ideal for a full day of skiing. The two kited their way in the bright sunshine and fresh snow until they were just 60 km north of Hay River and set up their tent in the middle of the lake, surrounded by nothing but ice and the faint glow of lights from the town noticeable only in the darkness of the empty surroundings.

With just light winds on Sunday, they decided to sleep in and take off in the afternoon. Following the path kindly laid by some skidoos in front of them, they were camping at the Hay River boatyard by 5 p.m. that evening.

“We skied right up to the beach, and camped next to those abandoned boats there,” Blyth says. “The only place out of the wind and with hard enough snow.”

For Blyth, it was the first time pairing a longer ski trip with a kite. Though McNair-Landry has done numerous kiting trips in the past, it was his first foray onto Great Slave Lake since he recently relocated to Yellowknife from Iqaluit.

“It was my first time across the lake and pretty cool exploring the backyard a little bit,” McNair-Landry said. “Just getting to know the lake a little better is really fun.”

The duo was slowed down a bit by the hard-packed drifts on the lake left by the storm, but still had a blast doing about 25-30 km/hr across the lake.

“Most of it’s the snow conditions,” McNair-Landry says. “When it’s hard-packed, there’s a lot of chatter on the skis. So, you usually don’t want to go much faster than that. But if you’ve got fresh powdered snow and a strong wind, you can really max out your speed a lot higher than that.”

The harder drifts meant there was added impact on the pair’s joints, especially their knees, from absorbing the impact.

“It’s more your knees and quads, because it’s like you’re jumping on and off a bench about 6,000 times,” Blyth says. And depending on which way you travel, you can end up putting a lot more pressure on one leg than the other.

Still, both McNair-Landry and Blyth say it’s an accessible sport to people of all ages who are into skiing.

“You’re going the same speed as the wind, so even if it’s 30 km winds, you don’t get the windchill because your relative wind speed is zero,” Blyth adds. “So when we were skiing, it was super hot. Then you stop and realize, woah, it is really windy today!”

Though McNair-Landry and Blyth opted for a quick trip to Hay River — conveniently located between Yellowknife and Fort Smith — a similar trek can be made to a variety of places along the lake, as long as the winds are right.

“There are tons of other communities you could go to, like Yellowknife to Lutsel K’e or back. There’s five or six more trips to be done on the lake, and this is a great way to experience it,” McNair-Landry says. “If the winds had been different, we could have gone up the North Arm or we could have gone to [Fort] Res, so that makes it really cool.”
Apart from wind direction, other important considerations are ice conditions and daylight — both of which make late winter/early spring an ideal time to head out, when there is more snow, thicker ice and longer days.

“The long hours of sunlight makes a big difference,” McNair-Landry says. “The more time during the day that you have where you can use the winds, the better. You don’t want to kite in the dark; there’s just too many ice chunks to catch edges on and whatnot, or split up the team.

“Once you’re in the middle of the lake, any spot is as good as any other. You just hunker down. The tent can withstand the huge winds.”

Along with basic winter camping gear, like a tent, sleeping bags, warm clothes and a cook stove, the duo relied heavily on their GPS to get them across the lake safely, and used a Delorme inReach two-way satellite text message device to report on their position and get information on wind direction and weather.

“It’s like a sailboat,” McNair-Landry says. “If you know what the winds are going to be, you can kind of strategically plan your route… or say, it looks like we’re sleeping in tomorrow because there’s not going to be any wind until the afternoon. That’s a really useful tool.”

All of the gear was pulled along in orange ‘Paris’ sleds — inexpensive but solid child-sized toboggans often used for outdoor work and play, whether that be ice fishing, hauling wood or ski expeditions, that can be found at Home Hardware. Those can be tied together with gear protected inside.

When it comes to skis, regular downhill sets are the way to go. Helmets are a must, along with a well-fitting harness, and having a variety of kites is also useful in order to adapt to varying levels of wind. For this trip, McNair-Landry took four different kites, and Blyth another three.

“The kites come in various sizes, from a 7-metres-squared area up to 18 metres in size. You fly the smaller kites in the strong winds and the bigger kites in the light winds,” McNair-Landry says.

All that said, due to the unpredictability of the weather, McNair-Landry emphasizes that the most important item to pack is fuel for yourself.

“Just bring a ton of food, because you never know when the winds are going to blow and not,” he says.

“It could take two days, it could take seven,” Blyth says. “You have to have an open schedule.” 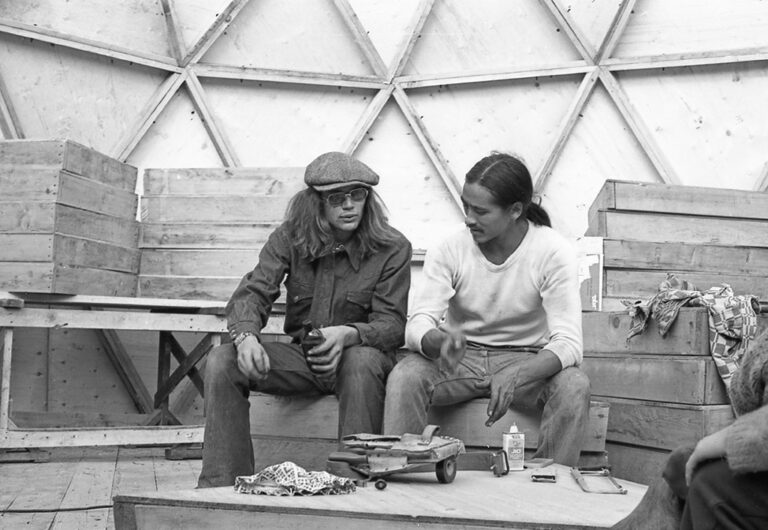