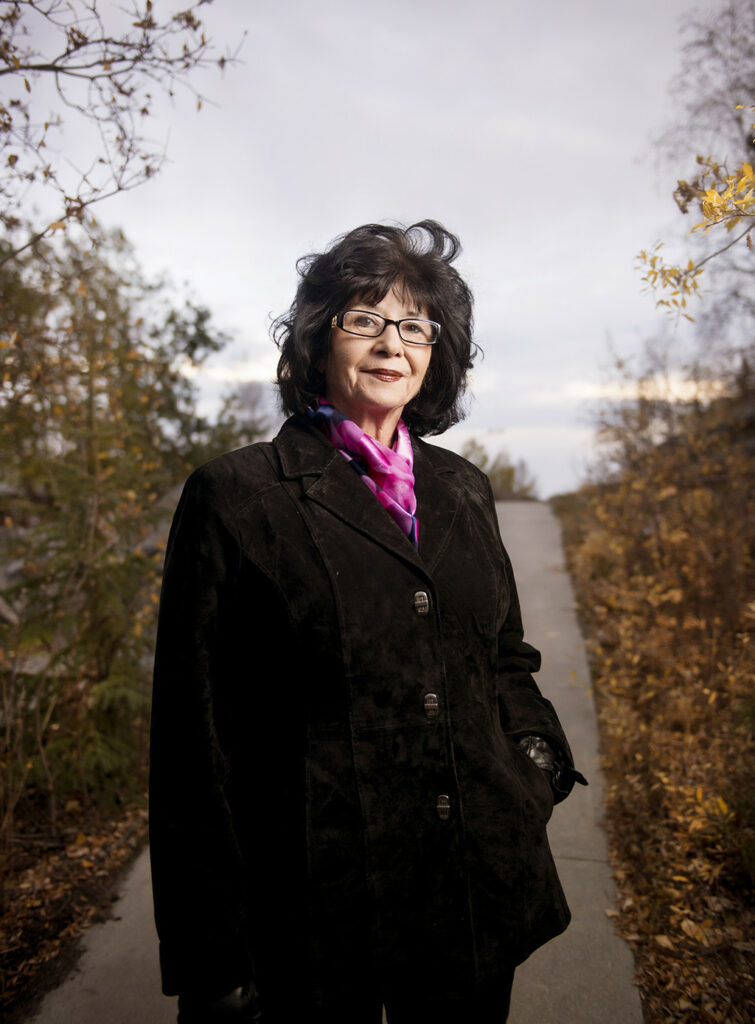 A pioneer of the northern feminist movement in a territory where domestic violence is nine times the national average, Brooks worked for the YWCA, the Society Against Family Abuse, and the NWT Status of Women Council, the last of which she was president and executive director.

With her husband, long-time city councillor Bob Brooks, she’s fostered 18 children and continues to advocate for women as a volunteer with the community justice committee, which serves as an alternative to the courtroom for less severe crimes and first-time offenders.

I sat down with Brooks to meet the woman behind the name and learn about the history of the women’s movement in the NWT.

I was running away. My husband was in jail, not for beating me – men very rarely went to jail for beating their wives in those days – but for robbery. I saw my chance.

I went to what they called Manpower in those days, and I said, ‘I want you to find me a job somewhere where no one will find me, but it has to still be in Canada.’

And they said, ‘oh we’ve got the place for you: Yellowknife.’

They got me a job in a bank and I packed everything up.

I have a little cardboard suitcase – we still keep it, we put Christmas decorations in it just to remind me where I came from – it had everything Shannon (my 14-month-year-old daughter) and I owned in it.

Before running away, what supports did you have?

Absolutely none. I could not go to my family. My family were abusive themselves; my mother would have said, ‘you made your bed, lie in it.’

The police didn’t take wife beating seriously at all. In their view it wasn’t really any of their business. You helped yourself or you weren’t helped.

Was the situation for women as bad in Yellowknife?

Very much so. Men outnumbered women probably 10: or 15:1 because of the mines. You’d think that would put women in a better position. But it made it worse. You were prey basically.

Several years after arriving in Yellowknife, you became an advocate for abused women. When did you start pushing for change?

I came in ’69 and it wasn’t until the middle ‘70’s that I ran into this group of women and started working for the YWCA.

There were between five or six, or maybe 10 of us that would get together on a regular basis. It was very informal. But we started writing proposals, going to see politicians. Actually, Sheila (Keet) was dating an MLA at the time, so we had a bit of an in there.

You yourself were escaping from a violent past. Did it take a lot of courage to get involved in advocacy work?

Not at all. I was just so fired up about doing something about it. I was just so fed up with my family and other women that I knew and their families; and this nonsense about ‘you got to stand by your man with your black eyes and broken teeth.’

In the early period of advocacy, the 1970s and ‘80s, what were you and your colleagues aiming for?

We wanted a shelter. We didn’t think that there was any other way to deal with (domestic violence); women needed a safe place to go.

The whole mentality – because of the residential schools and because the disruption of contact – was we don’t talk to people from the outside. We keep our own dirty laundry in our own house and we don’t talk about it; we don’t go for help with these people, because it’s them and us.

So these women had to get away from their communities in many cases in order to get any help.

How did people respond your work?

In the communities, a lot of the community leaders were saying, ‘oh these women just want to go to Yellowknife to go shopping.’

And there were a lot of average guys who were really against it.

I got into a cab one time and this guy launched into how we were home wreckers and going to wreck families.

We all came up with this phrase: ‘it’s not the women that are leaving that are tearing the families apart; it’s the men that are beating the women up. It’s the violence.”

What kind of response did you get from government?

It wasn’t that they didn’t know that it was happening. They just didn’t see that it was any of government’s business and that it certainly wasn’t something that they were going to fund. We had to do a lot of lobbying and a lot of education.

Same with the RCMP. We ended up with a good relationship with the RCMP but it took a lot of work. We would go in with women who wanted to lay a charge and they would just refuse, just say ‘oh she’ll be back with him tomorrow, go on you, go on.’

Throughout the late 1970s and ‘80s it seems the movement began to gain momentum. When did you begin to see change?

Around 1980 we started to make some inroads with politicians and the (YWCA) was very enthusiastic about the whole thing.

In 1977, the one thing that really helped was when the Minister of Justice, Robert Kaplan, said that the RCMP was to charge in cases of wife assault, even if the women didn’t want a charge.

Before that, the woman would have to lay the charge, if she could get anybody to lay it for her. And then of course she had to go home; well it’s ‘You drop the charge, or else, you’re going to be sorry.’

Was there a turning point when things really took off?

The territory-wide conference (in 1984) made a huge difference. That conference brought together women from the communities interested in doing something about the issue in their own community. You could feel this connectedness.

At the same time, Sister Agnes Sutherland decided that she was going to start taking battered women into the big old church in Fort Smith. And there was a group in Hay River that started up, and one in Inuvik, and it just started to mushroom. People were applying for the money and getting it from the GNWT and as well from the Federal Government.

You had a minister responsible for the status of women being appointed, so it was all kind of the perfect storm.

I think it was the whole international feminist movement. You had all of those great women, Jane Fonda and Bella Abzug, who were standing up and being role models and saying to women, ‘you don’t have to put with this.’

Like anything else, any other great social change, like the union movement or child welfare laws, it starts with an idea, and then people gravitate to it, grab onto it, and it grows.

You started taking women into Northern United Place in 1981, what was that like?

In the early days, with women coming mostly from Behchoko, because it’s the closest place, they’d often come on the bus. I would have to go down at midnight and meet the bus. These women would get off and the fear in their eyes would change to relief when they’d see he hadn’t figured it out and he wasn’t waiting for them.

Yellowknife’s family violence shelter, Alison McAteer House, opened in 1984. Where did you go from there?

Over the course of the next few years, the realization set in that McAteer House is wonderful, but where do we go from there? Where can women go after they leave McAteer House? There was still very little housing available.

We’ve been talking about second stage housing for 20 years. You see so clearly the need for something, but you have to work so hard to get the powers that be to finally say, ‘ok, we’ll do this, we need to do this.’

And now there’s Lynn’s place. What will this new facility do?

Women that come out of McAteer House will be able to build on the success that they’ve already had – (Lynn’s place) is going to have parenting classes, and financial management classes, there will be counseling and it’s a very secure building.

They’re still very fragile coming out of McAteer House and they definitely need a lot more support to continue on and not go back to the abuser or to end up in another abusive relationship.

Because many of those women are abused as children there’s a psychological comfort-level with abuse. To get past that takes time, so it’s going to give them that time. And it’s going to be such a safe and secure place for their children.

I think the children that come through Lynn’s place will be far less likely to end up as abusers or in abusive relationships.

Looking back to when you first arrived, how have attitudes changed since then?

What still needs to be done?

We also need many more resources. We could fill Lynn’s place five, six times over. And I sure wouldn’t want to be on the committee that has to choose from all the applicants. That’s going to be very difficult; all of their stories are worthy.

Are you feeling positive?

Very. I used to get pessimistic and say, ‘ah it will never change.’ But it is changing. It’s not changing quickly enough for me, and never has. But it’s coming.