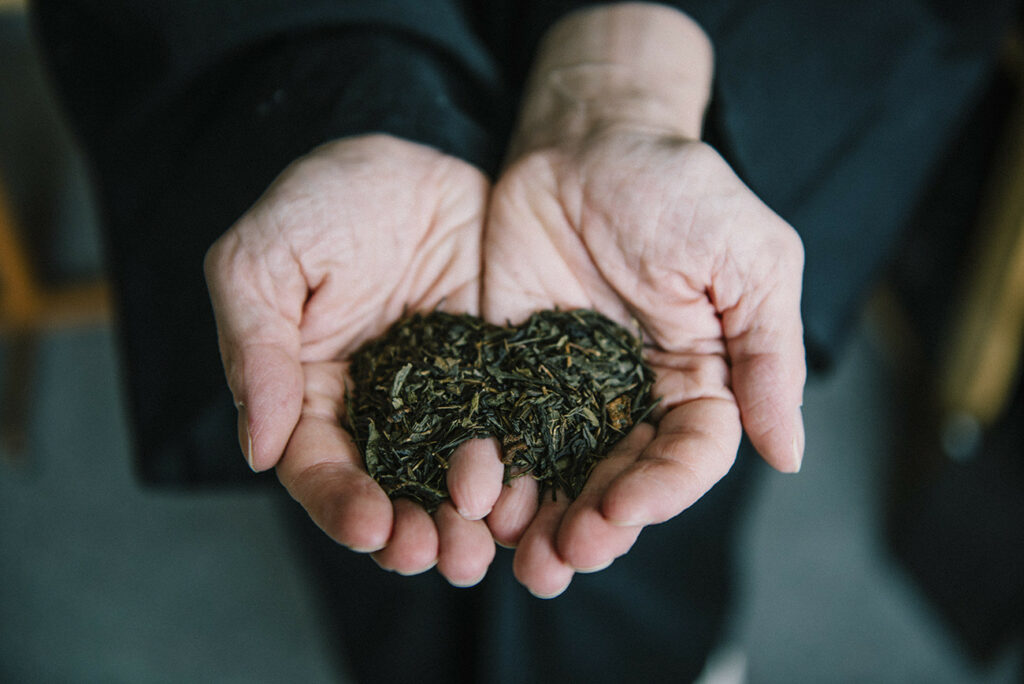 During several two-to-three-month stays at his mentor’s home in Germany’s Black Forest, Sade rose every day at 5 a.m. to gather the dew that collected in the broad leaves of trees in the dense misty woods – using this water to make the first pot of tea for the day.

The first pot of tea for the day is always white, says Sade – whose last name is Sada, if you ask him, though his business card, which lists him as the only Grand Tea Master in Canada, only bears the first. (His business card also bears the title ‘Enlightenment Coach.’)

We met at the Peace Building, which Sade manages. His Peace Café is tucked away behind French doors on the second floor.

He starts preparing a pot of tea as I sit down, though it won’t be ready until just minutes before we finish the interview. Tea preparation is a long process, if you do it properly.

While he shuffles through canisters and lays out five small ceramic dishes of dried tea leaves, I ask what drove him to become a tea master.

“Life is really strange when you…” he begins, then he laughs and trails off.

When he was seven years old and living in London, England, with his family, which he describes as dysfunctional, Sade came across a box of tea that no one else was drinking.

“I found the way I was preparing the tea, when I was drinking, it was doing something good for myself,” he says. “It was like a protection.”

When that first cache was eventually depleted, Sade made his way down to the Chinese market to find more.

“I asked the owner of a shop if he could teach me to prepare tea properly,” he says. The owner admitted that, though he sold it, he knew little about tea.

“But, he said, one of my customers is a tea master and he always comes at the same time, on the same day.” Sade returned at that time, on that day, and met the tea master, a Japanese man.

“The first question he asked is, ‘Why do you want to learn tea?’ I said, ‘Because when I prepare tea I feel safe and better – I feel a strong connection.’”

After thinking on it and meeting his family, the tea master took Sade on as a disciple. Something a tea master will do only two or three times in their life – the traditional process of training a tea master, Sade says, takes at least 10 years.

Sade began training when he was nine years old. He was 23 by the time he finished. Training started off every two weeks, then every month. Over the course of his 14 years of study, Sade stayed with his tea master five or six times in the Black Forest.

His teacher, he says, became a sort of father to him.

“He showed me how to chop wood – the kinds of sticks and thickness, it had to be very small,” Sade explains, illustrating the particular size wood was chopped to with his thumb and forefinger.

“For one month, that’s all I did; just chopping wood for the stove.”

During those years of wood-chopping and dew-collecting, Sade, dressed in a traditional kimono and sandals as he prepares my blend, says he learned everything about tea; the taste, the smell, the appearance and the history.

“Years after, I not only recognize which type of tea it is, but also where it came from,” he says.

Sade’s space is modest; wooden shelving units house black tea canisters – glass containers expose the tea to damaging light, he says – a kettle and several teapots are off to one side, and a small table is set in the middle. Sade says he has nearly 300 varieties of tea stored in the small room and a reserve room.

“I have one of the biggest shops in Canada,” he says. “45 countries produce tea, I have some 35 countries.” As part of his tea master training, Sade spent one month just chopping wood for the stove

Every five years, he tries to create new blends and change up his lineup. He says it isn’t good to drink the same tea, day after day. Some of his blends have up to 85 varieties in them.

“This is one of the teachings I have,” he says. “You find the perfect balance.

“Tea masters, we use all five senses. The sixth sense is to know what kind of tea the person would need.”

Sade hosts tea tastings and tea mastering sessions – in additional to a slew of other “life enhancing” services – in Yellowknife, but has customers around the world. The difference between his blends and some of the major manufacturers, he says, is that he avoids all sweeteners and additives.

The preference for tea outside of its natural form, he says, goes back to Englishman transporting tea by ship from China.

Tea was packaged in wooden crates, the kind some companies continue to use today – Sade points to one resting in the corner of the room. After six months at sea, and moisture penetrating the sealed crates, a good portion of the tea was often rotten by the time it landed in England. In order to still sell the tea, the merchants recommended adding lemon to cut the rotten taste, milk to dull the strengthened flavour, and sweetener to cut the bitterness.

“This is where the British Empire came to create some bigger cups, larger cups because you can put sugar, milk, and lemon it,” says Sade.

An hour later, Sade places a terracotta teapot in front of me – the preferred material because it maintains heat while the porous material absorbs the tannins, which are not meant to be consumed. A good teapot, he says, should be black inside from all the tannins – don’t even think about cleaning that teapot with soap.

Seven varieties went into my blend: a mix of white tea, oolong and it’s hard to say what else, though I did see notice some purple flower petals.

As well as the pot, Sade sets out a small ceramic glass – no handle, and no room from milk, sugar or lemon. Not that I would have asked.

It was, I have to say, a wonderful cup of tea.