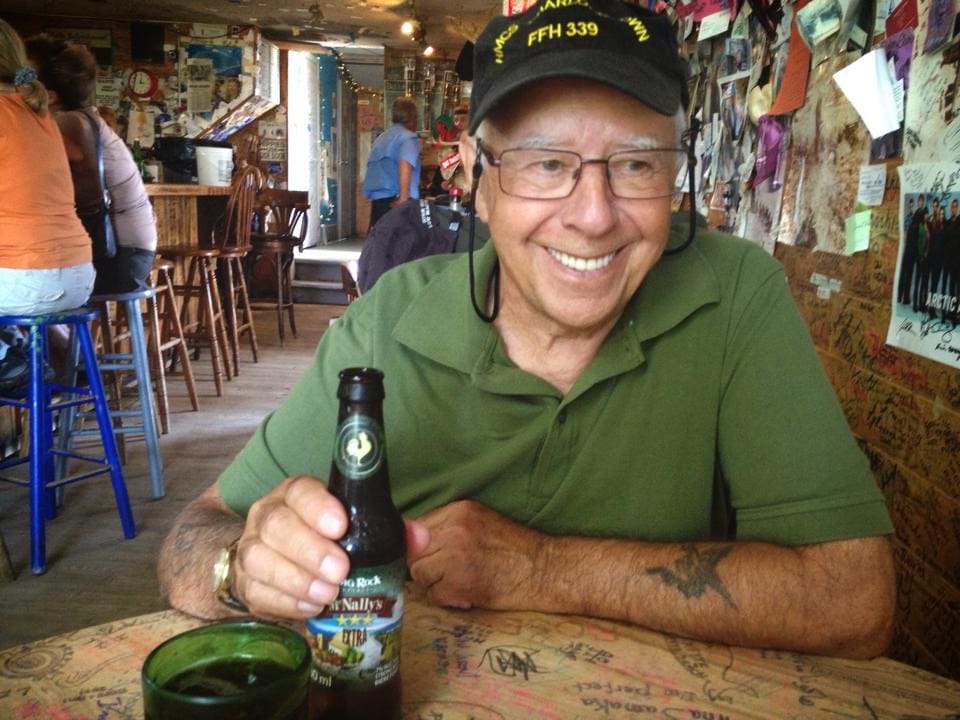 Taking a slow and grateful swig, he gracefully sat back in his chair. Pub noise humming around us, bellies stuffed, my date’s signature grin appeared. “That was a good pint,” he’d say. The finest gentleman, he never allowed me to pay. On the drive home, I made sure the radio was playing something he loved, opera or classical. Pulling into the drive to drop him off, my heart ached; I knew our rendezvous were precious.

This past summer, I spent most of my Saturdays hanging out with my 78-year-old Grandad, Captain John Goodman. He flew to Yellowknife from Newfoundland – our home – landing in late May and leaving late September. Though my Grandad loved our little Newfoundland town of 800 people, he was British, and dearly missed afternoons at the pub. It was thus a privilege for me to take him to places in town that served the two things he enjoyed most: draft beer and fish. Warm summer days were spent joyfully eating and drinking at the Black Knight, Bullocks, Sushi Café, the Explorer Lounge, Coyotes and Hot Shots. As he enjoyed his fish and chips and drank his pint, I admired the aura of his nostalgia.

Grandad died this Remembrance Day, and the only thing he enjoyed more than an afternoon at the pub was Christmas. This holiday season, my heart is beating to a slow, sad drum as all around me people are buzzing with joy. The sight of egg nog brings me to tears, Blue Christmas makes me weak, and I know for the first time in my life, this year I will not be watching A Christmas Carol.

On the day he passed, I was about to start painting a landscape scene when the phone rang. “Leila?” my mom asked. I knew immediately by the sound of her voice, and the early hour, that something was terribly wrong. I dropped my brush as she sobbed, saying “they found Grandad…” Moments later, my uncle arrived and we drove to pick up my cousin and her baby before gathering at my aunt’s house here in YK. It was a whirlwind of shock: tears falling as we clicked away on laptops, desperate to book tickets homes. My aunt Joanne is the strongest woman I know – but that day she was so small and weak, and I held her.

Salt water pumped through my Grandad’s veins long before Newfoundland caught him. Born in 1936 to John and Alice Goodman, he grew up by the sea in Fleetwood, England, a deep-sea fishing port. In Fleetwood, before men were dragged away to fight in the war, they fished. When he was 23, he too left home to fight a battle – the cold Atlantic. He sailed a boat from England to Nova Scotia for a company named Boston Fisheries. In Nova Scotia, he met a man named Bill Sutherland who convinced the young Brit to call Nova Scotia home.

But the Atlantic tides had different plans for Grandad. They lured him to a small community on the Northern Peninsula of Newfoundland. There, on a hot summer’s day in July 1959, he saw the woman he would marry, my grandmother, Gloria Biggin. Later, he proudly told friends it was her long red hair, and sea-foam coloured eyes that hooked him.

Twenty-two years after they married, my grandparents divorced. Other than Christmases and sporadic port visits, Grandad refused to stay put. He worked in Vancouver for years and left my nanny to raise their four children, much like the men of Fleetwood did. Though she loved him, my grandmother needed more and eventually remarried.

Years after, Grandad came home to Newfoundland. He isolated himself from any other chance at love and his family in England, and stayed that way for the rest of his life. He and my grandmother became friends; and despite the lack of romantic and platonic love in his life, he was content. Looking back now, the reality slaps me in the face like a cold easterly wind; we, his 11 grandchildren and four children, were the loves of his life.

It was a ritual on mornings after I arrived home from university. Exhausted and half-hung-over, I would push myself out of bed when I heard the front door of our Port Saunders home open at 6 a.m. Punctual as a star, he was always my first visitor. “There she is,” he would say, grinning at me when I finally made my appearance. Delighted, he would come kiss me on the forehead and return to his seat as mom poured me a cup of coffee.

She knew how important it was for me to appear awake, to sit across from my Grandad and tell him how I was doing. He listened to every word with utmost appreciation. When I enrolled in journalism school, Grandad watched my amateur attempts at reporting like he was watching Mansbridge break the latest. One day, as he was listening to me ramble on about some mediocre class, I stopped talking and took a real look at him. I drank him in. Never fully smiling, and absolutely not frowning, Grandad was constantly grinning, as if he had a giant secret. I know he had many. “You’re the Cheshire Cat, Grandad!” I explained as he chuckled. Goodman with his grandchild, the author.

To London, to London

In 2007, I studied in a small town outside of London. One autumn day while out for a walk, I suddenly became drunk. I fell hopelessly in love with all things British. English writers, food, galleries, fabrics, history…all of it, all at once, flooded my senses! That evening, sitting at my desk, I thought of Grandad and began to wonder how the hell he could leave this place for Newfoundland, never to return? Within seconds, I was head over keyboard, Googling his sister’s name. When I reached her, much to my surprise, she was just as curious as I was.

The next weekend, I caught a train in London and headed for Kent County to meet the sister Grandad forgot. The moment I saw Joan for the first time, it felt as if the world had stopped moving. That weekend we looked at photos, went to see Edith Piaf in an old-fashioned pink theatre by the sea. Eventually, we got onto the topic of Grandad and his decision to leave England. She and her family were angry, especially on the day his mother died and he was nowhere to be found.

Seven years later, longing to go back to the United Kingdom after Grandad’s visit to Yellowknife, I found the perfect seat sale and flew to Ireland. On the trip, I visited Joan, now 81, in England, though we talked much less about Grandad this time. She and her family referred to him as if he were a ghost – a person who once was. “How is my mother’s brother doing? Is he still alone?” Elizabeth, Joan’s daughter, asked, one day during tea. I explained his isolated-contentment. I tried to justify his lack of communication with them and would have fought harder, if I had known weeks later he would be dead. Goodman’s sister Joan and the author during her visit to the UK this past fall.

When I left, it was cold and wet. Joan and I drank coffee and lingered in the train station. I could feel her longing for her brother. We hugged good-bye, and she made me promise to call her, if anything were to happen. How could we have known I would be calling in less than a month to tell her their ghost was gone and that there would never, on this earth anyway, be a chance for the unspoken reunion we were all dreaming of.

One of the things Grandad was waiting for when he died was a phone call from me to tell him about my visit with Joan. Perhaps, he was finally ready to go back. “Tomorrow,” I said. When I get a chance, I thought. Because you see, unlike his family in England, to me he would always be waiting at home. He wasn’t a ghost, he was very much alive, forever there in the morning when I stumbled out of bed.

But on the day we arrived to bury Grandad, the church I grew up in felt different. It was very cold, and when I saw him, I fell to my knees. He wasn’t grinning.

Despite my best efforts to fight it, his favourite time of the year is here. I know I’ve been a bore to be around and must appear dreadfully Scrooge-ish this Christmas, but everything has changed and Christmas is different for me now.

My heart has never felt more alive and sensitive to what is happening around me. Reminders of my Grandad are everywhere. The love of Christmas is in my blood, but this year I’ve made a very conscious and real decision to see it in a different light. Not everyone is happy at Christmas: some are hungry, lost, poor, hurting, while some, like me, are missing someone very much…haunted by the ghost of Christmas past.

A few hours after I called Joan to tell her that her brother was dead, she sent me this in an email:

“A strange thing occurred on the morning of the 11th November – I think it would probably have been about 3 a.m. in Newfoundland. I was thinking about him and our childhood Christmases.  Some may call it coincidence but I prefer to think that it was his spirit, on its way to a better place, which paused for a moment to make contact with me.  Rest in Peace John.”