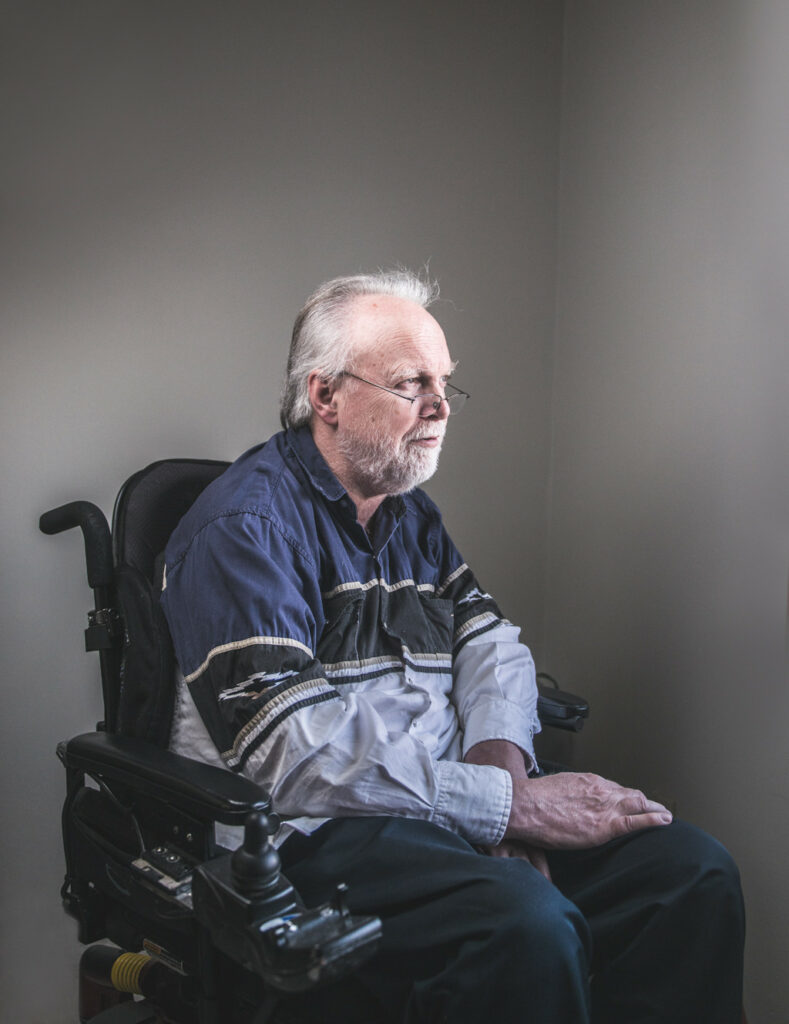 Only the brave or foolish, depending on your point of view, go outdoors during a Yellowknife winter.

I’m content to stay indoors and let others enjoy the winter that’s all around me.

But it hasn’t always been this way. Life is, I believe, a story written in the present, changeable and unpredictable, and this is mine.

The lure of adventure, and the promise of work, brought my family to Yellowknife from the foothills south of Calgary. “Let’s try it for five years,” we’d said. “We have nothing to lose.” Full of optimism and dreaming of adventure, we headed north.

That was more than 20 years ago.

I have a job I’ve loved doing for 35 years. As a result, I get up every morning looking forward to work. As an architectural technologist, my day is largely spent solving problems. It is my responsibility to take an architect’s dream and make it a reality. Their vision, combined with my knowledge, results in a successful project.

After arriving in Yellowknife, the adventure was a reality as my work allowed me to travel across the North reviewing and advising on construction projects. The Mackenzie Valley and the Deh Cho, the High Arctic islands, Baffin Island and Hudson Bay all became familiar landscapes. But four years after moving to Yellowknife, my adventure took a different path. Where I’d been healthy and active, an avid golfer and sometimes fisherman, I began to have difficulty walking, my toes dragging listlessly along the ground, my sense of balance sometimes askew. Something was seriously wrong.

It took six months of medical testing, MRI’s and specialist consultations before I was diagnosed with primary, progressive, multiple sclerosis (MS).

Cause unknown, cure unknown. Suddenly, my adventure was over. Suddenly, instead of unlimited freedom and new horizons, a wheelchair and all of its imagined limitations would shape my future.

Discouraged by the prognosis, I walked out of the doctor’s office knowing my dream of a northern adventure would soon be nothing more than a distant, faded memory.

The human brain is amazingly complex. Every thing we do, say or think begins in our brain. Like the spaghetti maze of integrated circuits which make up many of our modern toys, each part of our brain is integrated with the other parts along specialized pathways called neurons. Like a median separating opposing traffic lanes, a protective lining separates the pathways from each other.

When MS invades, that protective lining is somehow destroyed.

Gradually, imperceptibly, the circuitry in my brain was being disrupted, short circuited. I could think of doing something, but the message wouldn’t be delivered to my muscles. Standing, walking, even dressing myself all faded into memory as my dependence on others increased. The degenerative effects of MS robbed me of my ability to walk, my mobility and my independence.

Only with a wheelchair did I have a semblance of the mobility I once had. As a result, a city I thought I knew was transformed from a lively, energetic adventure into an ongoing series of challenges, frustrations and disappointments.

I watched as others did what I could no longer do — as others lived my adventure. If I wanted something at the grocery store, chances are it was on a shelf just beyond my reach. If I wanted to go somewhere, the question had to be asked “Is it accessible?” More often than not, it wasn’t.

Did I want a quick meal somewhere? Unless someone was with me to open doors, most restaurants were inaccessible. ‘Free delivery’ became an important and valued service.

As you know, the cold and dark of winter comes early to Yellowknife — usually by the middle of October. Snow decorates the landscape and is our constant companion until the middle of May. For wheelchair users, winter is a time to hibernate, to retreat from society and stare out living room windows and watch life pass us by. In truth, it’s the consequence of geography and the reality of cli-

mate which conspire to keep us indoors. Stymied by sidewalks buried under a hardpack of trampled snow (making them impassable to a wheelchair) and temperatures meant to take your breath away, it’s safer to be indoors.

Let others travel the well-used snowmobile trails or conquer their foes on icy backyard rinks. There are alternatives. Television and computers are seen as social pariahs, partly responsible for the growing number of inactive, overweight Canadians. But when you’re in a wheelchair, that same technology lets you travel to anywhere in the world. Freedom, for the moment, is just a click away.

When the earth’s axis tilts toward the sun, and the snow melts away, we have summer with its blue skies, gentle breezes and seemingly unending hours of sunshine. Summer opens doors and shows me a different side of Yellowknife, and its residents, which I haven’t seen all winter. Set free by the sunshine and warm weather, I embrace my freedom and explore Yellowknife’s many nooks and crannies — Old Town, New Town, NDilo, the airport loop, Niven Lake, Frame Lake, Negus Point.

If I have enough charge in my battery, nowhere is out of reach. Common sense tells me that if the ground’s too soft, the gravel too loose, or the hill too steep, I shouldn’t go any further. When I stare at a hiking trail as it disappears over an outcrop of Precambrian rock, experience tells me this is as far as I can go.

Guided by common sense and limited by experience, my desire to explore leads me down fence-lined back alleys of old neighbourhoods, along cracked and bumpy sidewalks framing a street I haven’t been on, or even onto a boardwalk bordering the grassy shore of Yellowknife Bay.

Reaction to my passage varies. Preschoolers stare and point in obvious awe and wonder. Usually they’re too unsure of me to approach. Elementary aged children are curious and innocently ask questions like “Why can’t you walk?”

Middle school kids are a little bolder and often shout after me, “I wish I had one of those.”

I counter with “be careful what you wish for.” High school teens are carefully indifferent and tend to ignore me. Adults are apologetic, always saying “excuse me” when we pass on the sidewalk. I haven’t quite figured out why.

Generally, however, people are always ready to say a friendly hello and are intrigued by my mode of travel — like 2 young boys were when I was in NDilo one warm, summer afternoon.

Wandering from street to street in absent-minded distraction, I’m met by two boys out enjoying the afternoon on their bicycles. I watch them approach me as they watch me approach them. They are obviously intrigued by my mode of transportation.

“How fast can you go?” the older of the two asks, legs comfortably astride his bike, hands casually resting on the handlebar.

“Probably not as fast as you can go,” I reply.

“Can you go this fast?” he questions as he speeds off, feet pedalling furiously.

Fifteen metres away, he turns and accelerates back toward me. His younger companion, the silent one, watches with me. Just moments before an inevitable collision, he stands on his brakes, showering both of us with gravel.

Grinning broadly, my young friend looks at me and says “Can you do that?”

I chuckle and say “No, not likely.”

As I resume my roll down the street, my new friends show off their riding skills. Between donuts, wheelies and impromptu jumps, they ask me questions and, as best as I am able, I reply. After five minutes of impromptu conversation and showmanship, the boys are distracted by something new and head off on another adventure.

I watch them for a few moments, smile at their enthusiasm, then continue on my way. I‘m intrigued.

As unexpected as it was, in the ever-busy world of two young boys, I’m just another interesting visitor.

My wheelchair was something unusual, something different, but not something to be afraid of.

As summer eventually draws to a close, the first hint of the coming autumn paints leaves yellow and brown, and I try to capture images to carry me through the dark of winter. On a sunny, warm Saturday afternoon, my sometimes aimless wandering has taken me three kilometres from home to Negus Point, a much older part of Yellowknife.

Beyond the last mobile home, across abandoned railway tracks and down a seldom-used road, I am at an abandoned company townsite which contributed to the growth and development of Yellowknife in the 1940s. Weeds grow unrestricted among the crumbling remnants of a playground. Rock boulders block access to narrow, unused paved streets, which nature is slowly reclaiming as its own. Where homes used to stand, there are now only weed-infested holes in the ground, mute testimony to what used to be.

Warmed by the late summer sun, I stop, reposition myself on the seat cushion of my wheelchair, and listen to the ghosts of long-forgotten residents communicating with each other on the gentle breeze curling lightly past my ears. This is a special place. History has always intrigued me, and I enjoy being able to explore our past, enjoy our present and contemplate our future.

I’m often asked “Is Yellowknife wheelchair accessible? Is it wheelchair friendly?” In my opinion, in the winter the answer is “no.” Climate and geogra-

phy wreak havoc on the best of intentions by City planners. In the summer, the answer is “yes.” It’s when I explore, socialize and am rejuvenated. With a positive attitude, a whiff of common sense and a willingness to compromise, I go where I want, do what I want. Within reason, of course. Is that any different from anyone else?

Whether exploring a seldom-visited neighbourhood, meeting talkative youngsters on a quiet street or saying hi to a group of locals on a park bench, my wheelchair is my introduction. It’s something different, something unusual, something which invites comments and questions. I’ve found imagined limitations imposed by my wheelchair are often only in my mind.

So come with as I explore my Yellowknife, our Yellowknife. We have nothing to lose. 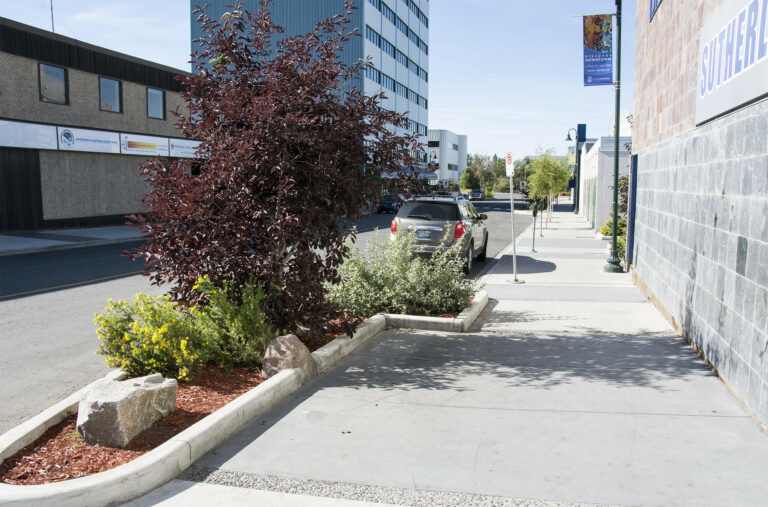