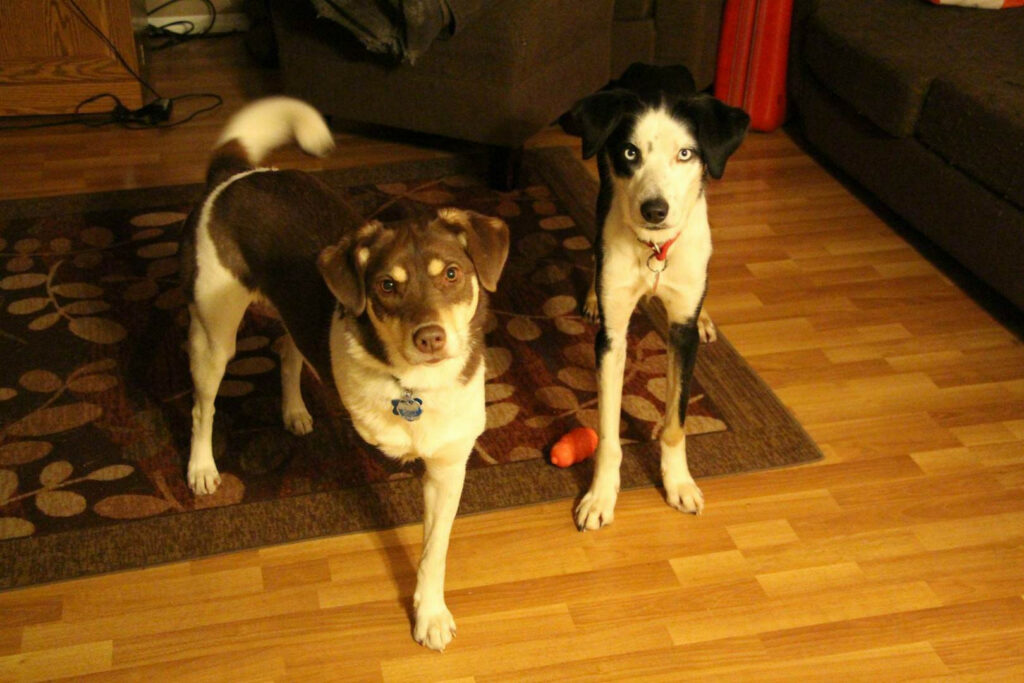 Dogs with a deathwish: Willow and Laika in a rare moment of not trying to damage themselves

It’s the middle of the night, and I am sleeping on the tiny loveseat in the living room with my arm stretched across the fluffy back of my best friend beside me.

Her name is Willow, and she’s a tri-pawed husky mutt from Fort Chipewyan. She is also mysteriously ill, and I am trying not to panic.

She’s been puking up her food for a day now, and didn’t want to eat her breakfast — an unusual move for a perpetually hungry canine. She’s drinking water and in fairly high spirits, but whatever’s coming out of her backend is not pretty, or normal.

I’m reading online about what it could all mean, which could be anything from “garbage gut” — did she get into something gross while I wasn’t looking? — to parasites, to the serious worst-case scenario of impending death.

I am counting the minutes on my clock until 6 a.m., the last chance I will have to decide whether or not I need to emergency transfer her to High Level by airplane at 7 a.m.; when I will have to call the airline to see if that’s even possible; when I will have to guess if she is good to make it another day on the guidance of a liquids-and-white-rice diet.

I know people whose pets have died enroute as they helplessly sped towards High Level; who couldn’t afford to ship them by plane, or the after-hours emergency vet bills. Other communities with even less access to veterinary care often only have one option: saying goodbye.

For people who have a full-time vet in their community, this wouldn’t be an issue. When you have worries, you take your pet to the doctor. In Fort Smith, we only get that luxury once every month or so, when the fine folks at Mackenzie Veterinary Services drive their big-rig mobile clinic into town for five days — our only saving grace for spaying, neutering, vaccinations and check-ups — while hitting Hay River and, occasionally, Fort Simpson along the way.

In the meantime — and emergencies seem to only happen in the meantime — you have to weigh your options, get over-the-phone assistance, administer drugs yourself, and call upon the experience of dedicated animal shelter volunteers to get you out of a bind.

I have done all of that. But the waiting is excruciating. If she has a blockage somewhere, or her health deteriorates, it’s between five and six hours to drive to High Level from Fort Smith. Timing is everything.

I know this because I have done it before.

Long drive to an amputation

Willow had four legs when I rescued her as a puppy from the animal shelter in Fort Smith (where she also came with the name Miss Piggy). But just shy of her (approximate) first birthday, she was hit by a car.

I wasn’t home when she got out of the yard. I was about to go rafting on the Slave River when I got the news and raced back home to find her with a broken front leg. It was 7:30 p.m. on a Friday night in May.

The vets in High Level said they could book an emergency appointment for her at 9:30 a.m. the next day. I borrowed a truck, packed a breakfast and put Willow in the backseat. At 4:30 a.m., I set off down the long highway alone with my worries and tears.

I was given a range of options, from putting her down (not actually an option) to surgery in Edmonton. Driving to High Level and paying for an emergency appointment was already going to cost me dearly and a $5,000 surgery plus $2,000 worth of airfare and accommodations for me and my pet was not possible.

Between attempting to repair her leg and straight-up amputation, I decided to at least fight for a chance she could remain four-legged. After all, it was a weight-bearing front leg and she was a puppy with a long life to live.

But there were complications. Because I had to wait so long to get her to the vet, her leg was already extremely swollen by the time they could do x-rays and see that the two bones — each cleanly broken — could no longer be realigned.

For two weeks, I taped and splinted the leg of a boisterous husky puppy who was forced to remain confined to her kennel. I was having to medicate and sedate her. She would routinely kick the splint off and scream — yes, scream — in pain. It was terrible for both of us.

So halfway through our four-week splinting program, I called them up again and booked another drive to High Level to amputate the leg.

This time I took a friend, and thank heavens, because bringing Willow home on a six-hour drive with fresh stitches while she was coming down off her anesthetic was probably one of the worst days of my adult life. The wound bled as she writhed around in confusion and we had to stop at the 60th Parallel Visitor’s Centre to nab whatever they had for bandages—which turned out to be a tensor and a pillowcase — to patch her up.

When we got home, we made her a little t-shirt to cover the wound and taped a sock on her back foot so she couldn’t scratch the stitches. She looked like a kindergarten craft project. But she healed.

I wish I could say this was the end of the emergencies. Since Willow’s amputation, she and my other dog, Laika, have done numerous ungrateful, stupid things to attempt to kill themselves, despite the fact that they eat better food and have better exercise regimens than I do. The lovely vets from High Level, husband-and-wife duo James and Jocelyn Stickney, to this day make “too-soon?” jokes with me about my dogs’ daredevil lifestyle.

All parents worry about their kids turning to drugs. Finding that my dogs had scarfed down a bottle of ibuprofen was certainly one of the highlights of our relationship. That day, I became an expert at administering syringes of diluted hydrogen peroxide to force vomiting. I called over the most experienced shelter volunteers in town to help, who brought over a bottle of activated charcoal, possibly obtained at one point from an animal lover at the health centre. Miraculously there was no permanent kidney, stomach or liver damage.

Laika subsequently spent the following Thanksgiving stealing turkey bones from the kitchen counter. I rang in my first date with my now-boyfriend by making her throw up a carcass in the most romantic of all evenings.

Another time, Laika got a circular bone inexplicably stuck around her bottom jaw behind her canines, where her mouth was quickly swelling and compounding the pain and panic. It took five adults to hold her down and pull it off. She hid under the bed for a day after that, and we got rid of almost every bone in the yard.

Pet owners know that anything — anything — can happen when you have curious, energetic dogs. It’s just that most have a vet to fall back on in times of need. When that isn’t possible, sheer will and creativity are sometimes the only things that can get you and your dog through.

Some people aren’t as lucky. I know people whose pets have died enroute as they helplessly sped towards High Level; who couldn’t afford to ship them by plane, or the after-hours emergency vet bills. Other communities with even less access to veterinary care often only have one option: saying goodbye.

There’s a lot of pushback from parents of real, human children that dogs, cats and other “fur-babies” aren’t kids. As a pet owner, I think I can speak for most of us and say we get that. I did not personally give birth to these weirdo furballs, nor do I have to dedicate my entire life to their development into adults.

But imagine you couldn’t take your actual kids to the ER when you suspected they were sick, because the nearest hospital — or health care practitioner — was 570 km away most of the time. We have already seen tragedies where a medevac could not respond in time to a person in need of care. For animals outside of major centres, that is an everyday occurrence.

My dogs have put me through the wringer emotionally and financially over their brief four years on earth. They have, without a doubt, shaved as many years off my life. Still, I can’t picture not going to the wall for them when they need it. My love for them has been proven to me, again and again, to be limitless.

So yes, I will drive six hours in the middle of the night, dodging wolves and bison on the road; I will pay thousands in vet fees and prescriptions; and I will allow myself to get gouged by Northern airfare to add just a little longer to their short lives. But throughout the stress and mess and cuddles and tail wags, I sincerely hope that one day we will have the capacity to offer more to our pets in the North.

As for Willow, she appears to be on the mend today. Even so, my gas tank is full.