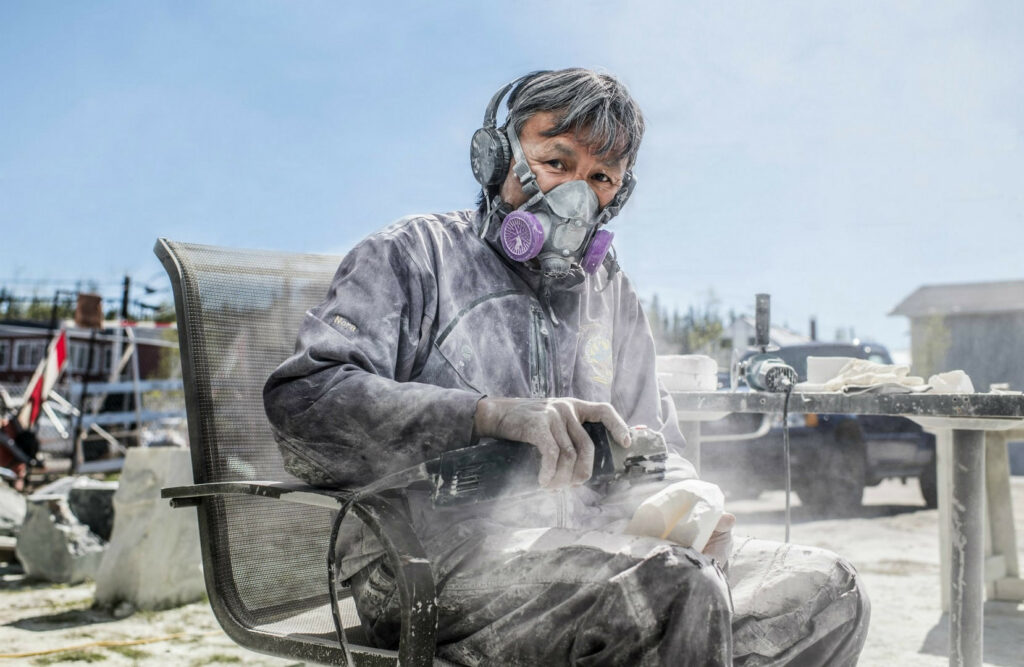 Since the mid-’90s, a rotating group of carvers have been working in a studio space near Trail’s End. Currently, the roster includes Derrald Taylor, John Sabourin and Eli Nasogaluak, along with visiting artists like Derrald’s nephew John Taylor. Angela Gzowski visited them recently, and talked with Eli, who has been working there since 1998, about the studio. I’m originally from Tuktoyaktuk. I started [carving ] when I was about ten years old. Then, of course, throughout the years, growing up, I went to school, and all kinds of courses and went in for electronics and all that. Later in years, I came back to my carving after leaving all my other positions. Since the ’80s I’ve been doing this full time as a professional artist.

I came here in ’98. Derrald [Taylor] was here. Some of the boys were here, and that’s where I started.

We’re a group. We work together as fellow artists, but you can’t have too many here at once, because the amount of dust created. The Asian tourist market is very poor for carving sales. I suppose the problem is just, in the way of shipping carvings, y’know, they’re tourists that just like to travel light. Maybe once in awhile you might sell jewelry and stuff like that, but carvings, it’s very poor, that market. Otherwise, other tourists that come by, a lot of them are just individuals. We appreciate them coming over. A lot of sales have been going out to those that are on their own, really.

Yellowknife really doesn’t know that there is Frozen Rock Studio here, and what it’s all about. I suppose one of the big drawbacks to getting the people to know who we are and what we’re doing here is because of marketing. We’re not marketing people, we’re carvers. But putting on a Facebook presence really helped in that area to kind of showcase our work and get the word out there that there’s a studio here.

We like it when Yellowknife knows that we’re here, because a lot of Yellowknifers do come to buy work, and a lot of them have been repeat buyers. Once they know your work and you’re established with them, they always come back for work and they always pass the word on. The question about traditional soapstone is a good question, because what is traditional soapstone? I suppose a lot of people could define it as local stone. But really, Yellowknife doesn’t have any local stone for carving, so the term soapstone is a generic term for stones that are soft, easier to carve. So any stone that’s carveable, we just call it soapstone. But most of the stones we get are shipped up from Vancouver. Neolithic stone. Very good suppliers. And we can get lots of variety. So that’s where I’m picking up my marble blocks. They’re Carrera marble, very high quality. This Carrera marble is originally from Italy. So you can see that they do collect all kinds of stones from all over the world. I’m Fragile (If You Actually Care) We go outside to carve. We have all the clothing, the parkas, the pants and everything, to carve outside. Whether it’s 40 below, we still carve outside. It’s preferable to carve outside before you bring it in, because the amount of chips and dust from the power tools —the bigger tools throw a lot of dust, which you want to keep outside anyway.