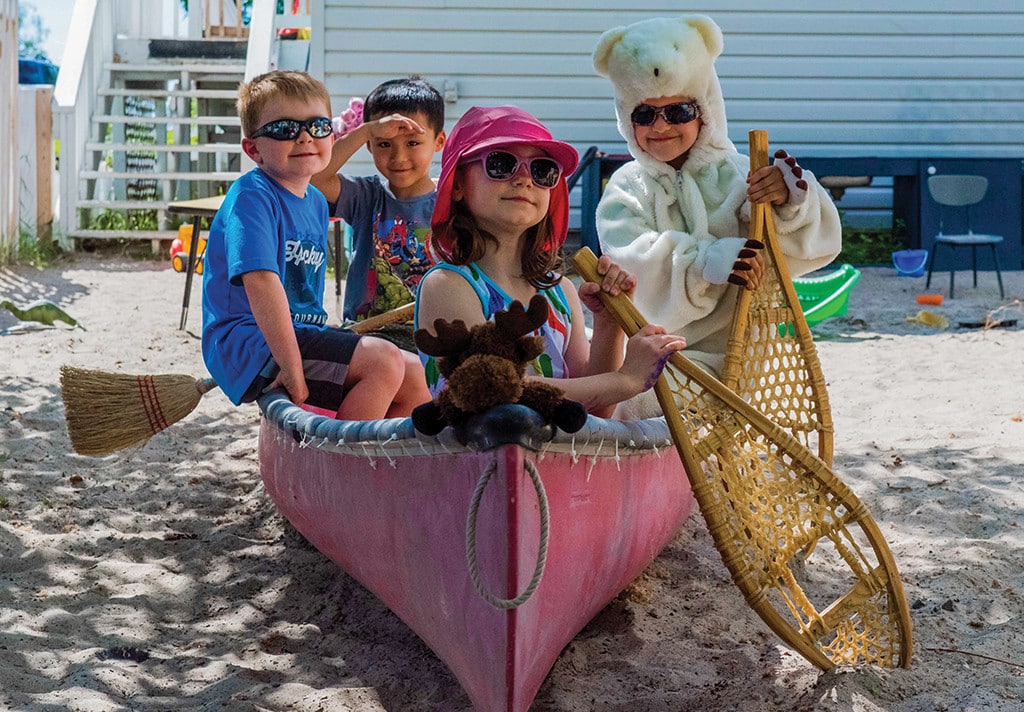 From rainbows to rocket ships, terrariums to pterodactyls, the Yellowknife Playschool has been a bastion of make-believe for preschoolers since it opened March 1, 1977. Now in its 40th year, the parent-run, non-profit organization demonstrates what is possible when moms and dads collaborate to realize a common goal: to make wee children’s lives wonderful. A couple thousand kids who have cycled through the playschool since its humble beginnings are now artists and doctors, chefs and firefighters, Olympic athletes… and parents themselves, bringing their own children back to the school for the same positive experience. But it hasn’t been all fun and games.

The playschool’s philosophy is founded on the notion that young children learn essential life skills best by playing together. That’s a challenge given the bitter cold and the long, grey days of a Yellowknife winter, says Gail Wolfe, the playschool’s first assistant teacher in the ’70s. “Back then Yellowknife really needed a playschool setting,” she says. “Many lived in apartments and it was hard to meet other little friends.” So parents got together and launched the playschool in a donated space in the old city hall building on 50th Street, where Reddimart now sits.

Across the road, Roy’s Confectionary scooped ice cream cones to the older kids and down the block the aroma of fresh bread emanated from Kruse’s Bakery, near the space occupied today by The Fat Fox Cafe. A vault with its door removed served as the toys and games storage room. A thick brown and orange braided rug hosted storytime.

“The old city hall was cold and drafty some days but it was a place to begin,” recalls Wolfe. “Extra sweaters and warm socks were often worn and we played in the indoor sand box more often than the water table in the winter.” When her colleague Barbara Chamberlain moved south, playschool parent Judith Drinnan button-holed educator-turned-stay-at-home-mom Toni Auge in front of the post office and convinced her to apply for the job and keep the young playschool running.

Beulah Phillpot, now 77, is one of the original volunteer moms. Her daughter Darha was ferried to Auge’s class on her father’s bike, or drawn by sled over the snow after his lunch break. Darha remembers the long walk down the dark hall to the old city hall bathroom, which the pre-schoolers shared with staff of the new Outcrop business and other much taller tenants. “That walk made me nervous,” she remembers. But back in the classroom lay adventure and safety, costumes, smocks and easels, songs and stories, and the sense of feeling “important and welcome.” Wolfe says children learn to socialize, wait their turn, how to co-operate and to respect each other while doing what they love – play. The shared passion for play sparks by age three or four and prepares them not only for regular school but also for life’s ambitions and challenges.

Auge, renowned for her creativity as a teacher – Yellowknife has no circus? Then the playschool will make its own – taught a second year at the playschool, this time in a portable beside St. Pat’s High School after the old city hall closed to make way for a shopping mall. Behind the scenes the parent-led board sweated over a longer-term solution.

The lease with the Catholic school board expired in the spring of 1980 and Auge moved on to teach Kindergarten at JH Sissons School, where Darha attended Grade 1 while her mom campaigned hard for French immersion. But the playschool board had too much passion to quit now. “It was for the love of the children,” says Auge. “The board realized we needed something more permanent. The city needed something like the Yellowknife Playschool.”

On June 27, 1980, the board offered to purchase the former RCMP barracks at the corner of Burwash Drive and 56th Street for $48,000. That’s a lot of money for a volunteer board to raise in any era (annual tuition for students at the time was $30 for two half-days per week and $45 for three half-days). Moms and dads fundraised as best they could but failed to close the deal by the extended deadline of Aug. 29.

Parents Albert and Gladys Eggenberger stepped up and bought the house, tore a couple of walls down and in so doing bought time for more fundraising and a place for the children to continue to learn about friendship and sharing through creative play. A month later the board staged a concert fundraiser at Sir John Franklin High School that featured beloved Canadian children’s entertainer Raffi, with proceeds from the $3 and $2 ticket prices going to the playschool association. Raffi popped by the playschool during the day to perform songs from his then three-month-old album, Baby Beluga. The late CBC children’s entertainer Ernie Coombs, better known as Mr. Dressup, along with puppets Casey and Finnegan, drew pictures and read stories to the children in the same room during a visit North later that year.

Playschool parent and pediatrician Dr. Clare Moisey kicked in $5,000 to help with a down payment and on Oct. 25, 1982, the Eggenbergers transferred the land title to the Yellowknife Playschool Association.

With a new building, new board members – parent changeover typically happens every two or three years – a new cohort of 64 three to five-year olds, and new teachers in Bev Black and her assistants, the playschool played on through the 1980s.

Black and her colleagues continued to bring the children into the community for field trips to the fire hall to learn stop-drop-and-roll, the grocery store to touch avocado skin and Rat Lake to spy on water beetles. She also maintained playschool traditions, such as the spring tricycle parade and family parties at McNiven Beach.

In 1991, the board demolished the old barracks and built the new building that houses the playschool today, installing an addition 10 years later. “The parents really fundraised hard,” says Black. Beyond fundraising, cleaning and otherwise keeping the building running, parents support the teachers in the classroom by subbing or just entertaining.

In the early 1990s, Jamie Bastedo would drop by to share bird calls – popular with classmates of daughters Jaya and Nimisha – read books and sing songs with his guitar. “Yellowknife Playschool is a very special place,” says Bastedo. “A crucible of creativity, that’s what it was for my kids. Think of the lives that that place has touched. Yellowknife is a place of ephemeral businesses and people come and go but the playschool endures.”

The playschool’s finances faced a challenge a few years ago when enrolment dipped to 75 per cent after public schools introduced for-pay preschool, but the board adapted by inviting potty-trained children as young as two-and-a-half. The average age of the students has since dropped and most students now attend for one year instead of two, a trend that will likely continue with the start of junior Kindergarten.

However, enrolment reached 100 per cent this past February and the playschool is poised to achieve the same milestone in September. The board recorded its first surplus in years, $17,000, that will help with maintenance projects, such as a new fence, a sump pump and fresh paint.

In 2009, the end of Black’s 25-year tenure, she began seeing the children of her earliest students walk through the door. Today, plenty of second-generation playschool students make up the classes, including Darha Phillpot’s three-year-old daughter, Marley.

“The school’s been around forever and the people involved are invested in it and passionate about it,” says Victoria Budgell, who taught there this past year. “You can definitely feel it – especially when you have alumnae who are bringing their own children there.”

Community engagement and intergenerational learning is a big part of the playschool program. This past year the children played alongside other people’s grandmas and grandpas at Aven Manor, shook off the winter blahs at the gymnastics club and explored the Snow Castle together before it opened to the older public. Next year the seven-member board is discussing logistics for field trips to the pool and dogsledding.

“That the Yellowknife Playschool is still there is such a tribute to the importance of early childhood socialization, which is way more important than almost anything that you’ll ever learn,” says Beulah Phillpot. “It is wonderful to think of being three years old. The world is out there. Everything is perfect. And if it isn’t, you have a wonderful adult who will make it right for you. That’s what the Yellowknife Playschool is all about.”

Daron Letts is Daddy to five children, one of whom attended the playschool last year, and served as the playschool’s volunteer snow-shoveller from January to March. Two more Letts children are destined for the playschool in 2018 and 2019.