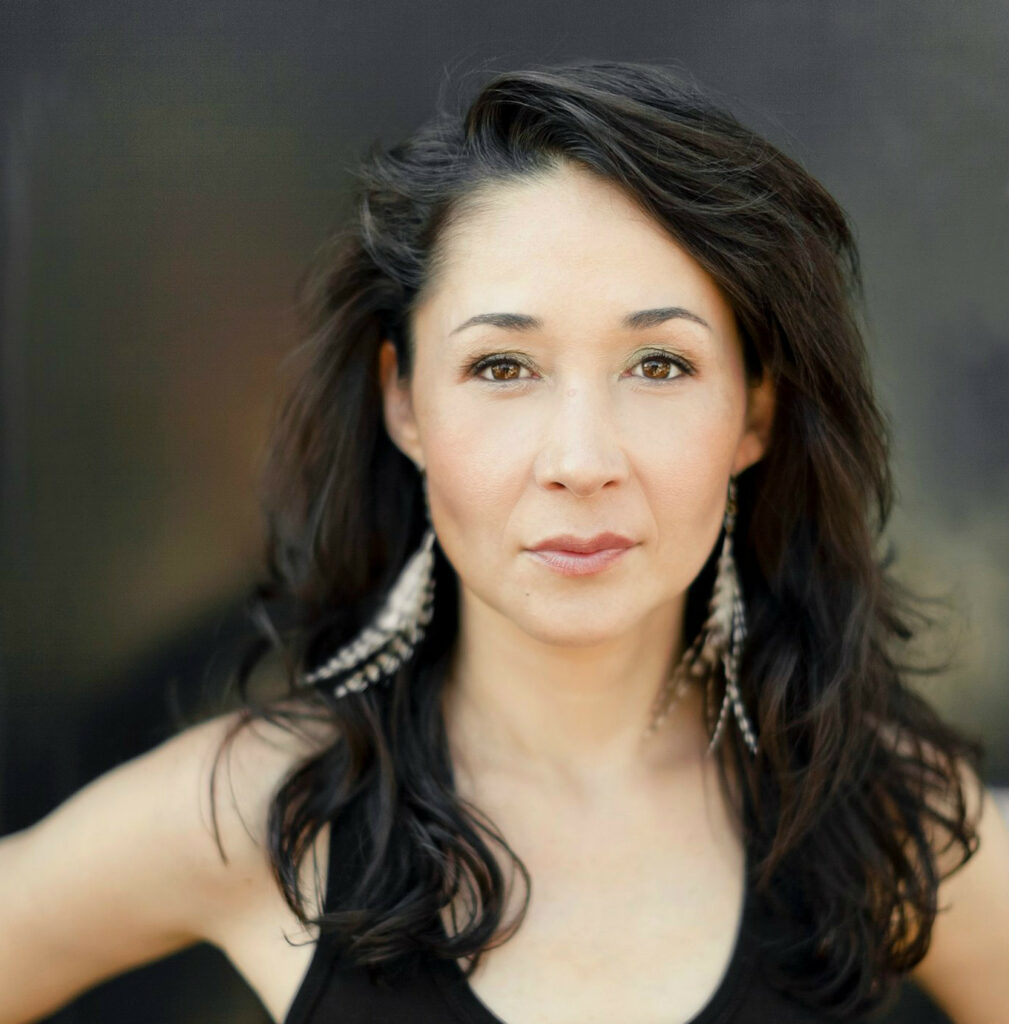 “The reason I’m doing this play is to bring a voice to a silenced demographic, and it would be terrible if I was silenced by my own community.” | Photo courtesy Reneltta Arluk

When Pig Girl, the award-winning play based on the Robert Pickton murders, first hit the stage in Edmonton in 2013, it incensed the Indigenous community. Written by a non-Indigenous woman and performed by non-Indigenous actors, its initial run resulted in calls for a boycott. Now more than two years later, the controversial play has been workshopped and returns to the stage on Jan. 28 in Montreal, starring NWT-born actress Reneltta Arluk as its first Indigenous lead.

EDGE spoke with Arluk about the backlash against the play, the struggle of playing ‘Dying Woman,’ and the need for greater dialogue around missing and murdered Indigenous women in Canada.

How did you get involved in Pig Girl? What attracted you to it?

It’s probably one of the most controversial plays I’ve ever been part of… I knew about it because of the controversy that happened in Edmonton around it.

Micheline [Chevrier], the artistic director and director who runs Imago Theatre, said she was doing it and that the play had been workshopped since then and there were some changes in it. Her vision was that we just needed to start having a dialogue about our missing and murdered women in this country, but also violence against women in general.

Imago is a women-based theatre company; they do plays that are about women. So I really respect her; she’s been in the business for a really long time, she’s intelligent and a great director, and I really liked that they were doing outreach — something that Edmonton didn’t do. So I thought, if there was a play to be part of that would have significance, this would be the play.

Tell me about the character that you play.

It’s called Pig Girl, and a lot of people have issues with the title itself, just because it’s based on the Pickton farm. So they’re saying it should be called Pig Man or something else. I play Dying Woman; the characters don’t have names. They’re Police Officer, Killer, Sister and Dying Woman. Their characters are descriptions of who they are. So Dying Woman dies.

I’ve read that it’s a very difficult experience for the audience, but I’m guessing it’s got to be difficult for the cast, as well. What do you think is going to be the biggest challenge for you in playing this role?

There’s a lot of gratuitous violence in the play, if you read the stage directions, so one thing that Micheline’s done is she’s separated the characters so that none of us actually interact with each other. We look forward and we each have our own patch of dirt. It’s kind of breaching the idea of tragedy; lifting the story and making it tragic rather than making it, what I call, kitchen-sink theatre, where we’re interacting with each other.

So there’s still violence, but he’s not doing the violence physically on me, but more impressionistically on me. But it’s still painful. I do all the physical elements of it. I hang for 40 minutes of the play. I’m not actually hanging on a hook, but I’m still looking like I am, so the physical exertion is actually really intense.

So do you think that’s going to be the biggest challenge for you in navigating that character, the physical element of it?

The physical element and the emotional element, because she does die. I die. Throughout the play, the character’s really feisty and she’s fierce, she’s intelligent, she’s smart and she’s trying to navigate herself through, to survive.

Even though I’ve done the play many times through rehearsal, I still believe she’s going to live. And I fight for her every time. Then you get to the point in the play where she is not going to live, and I, myself, just feel really helpless.

Every time we do a run of the show, I’m always crying. Reneltta’s crying on the floor. So it’s not an easy story to tell, but I just believe in it. I believe in it.

What is it about it that you believe in so strongly?

The controversy around the play is that there’s a non-native person’s play about an Indigenous woman, and whose right to the story is it? But since that production in Edmonton, it’s gone to a rewrite workshop where Colleen [Murphy] took out the word Aboriginal. So there’s no reference to her being Aboriginal in the play anymore, but you would be really amiss to not cast an Indigenous person in this role because of our murdered and missing women in this country.

It’s a silent demographic. It isn’t on our radar, unless you’re associated with one in the community. It’s not on our radar as Canadians. I think Colleen’s writing of this play is for the rest of Canada, to say: wake up. It’s beautifully written; it’s actually quite a well-written play. It’s a tough memorize and a tough physical. It’s actually just a really tough play.

I can imagine it would be even tough just to go watch it.

Yes, as an audience member, it’s going to be challenging. But we took the gratuitous out of it so you could hear the necessary.

Have you received feedback around your participation in it?

I have. When the play started getting a little bit of publicity and my name was put on the website, I actually got contacted by a member of Idle No More and was like, okay, this is happening. She just said, ‘Are you aware this is about the Pickton farm?’

I don’t just randomly pick shows; I don’t just go, ‘Oh yeah, I’ll do that, whatever.’ I take a lot of consideration into the parts I’m a part of and what stories I want to tell. So I said, ‘Of course, I do.’ She said, ‘Do you want to talk to a Montreal blogger about it?’

You could tell that a campaign was already starting to happen to boycott and protest this play. I could tell that it was heading in that direction, and I just said, ‘You know, I have no problem communicating, but I come from a place of support and encouragement. I’m not looking to create a conflict; I’m looking to create a dialogue.’
Thankfully, she had heard of me and my reputation, so she was really respectful, but I know of at least two different emails from at least two different groups of people who are talking to organizers in Montreal and across Canada about this play. But then again, there’s an Indigenous community that completely supports it.

So I talked to this Metis blogger and she said she was just going to focus on the white angle, that it’s white people doing this play. I said, ‘You can do that, but they’re behind the scenes. The truth is, when people come to the play, they’re going to see me on stage. And they’re going to start focusing on me.’

The whole reason I’m doing this play is to bring a voice to a silenced demographic, and it would be terrible if I was silenced by my own community.

What else has Imago theatre done to reconcile or change some things that were controversial in Edmonton?

I don’t want to put down that company — it’s a really great theatre network. But I don’t think they realized how fresh — how sore, actually; it’s continual — how the Indigenous community is being impacted by our missing women. I don’t think they really understood that because they didn’t do any outreach. So when it got to the community that this play was happening, they weren’t invited to be part of the conversation.

This time, Micheline and her company have done tremendous outreach with different organizations within Montreal and the outskirts, inviting panelists and people to talk after every talk-back, and she’s done it as ‘pay what you decide,’ so it’s accessible to anybody with any amount of money to come and be a part of the conversation. It’s not that Imago wants the conversation to be positive; it doesn’t have it be, it just has to have a dialogue.

So she’s cast an Indigenous woman, and we have a native assistant director, who’s been a part of the process. She’s been contacted by different companies saying they are refusing to see the show and won’t be attending, but even that’s dialogue, you know? Because they’re saying why.

I read the director say in an interview that the play is about life as much as it is about death.

What do you think is the message of the play?

Because the character is called Dying Woman, you expect her to be a victim. And she is a victim at the end, but what you see throughout is how fierce she is and how she wants to live.

So what this play does is it brings that woman on stage and gives her a sister, and you hear about her life. So you see her where she is now, but you get to go back to where she was, and I think that’s where the life element really plays through.

So do you have any advice for anyone who’s on the fence about going to the play, based on what they’ve heard?

You don’t necessarily have to come in with an open mind. You can come in with your closed mind, but you won’t leave with a closed mind, because the actors are amazing. The other people I get to work with are pretty phenomenal people, and Micheline has created a very beautifully staged play with really engaging text.

Right, and I’m sure that’s also why it’s caused some people pain to hear about it.

Absolutely, and justified. We’ve had people email us going, ‘Why are you doing this play?’ And we talk about why, and then they go, ‘Well I’m really glad I emailed you, but I’m still not coming.’ And Miche’s like, ‘Well why would you? You have a missing cousin or missing sister or missing aunt; you don’t need to come see this play because you already know the story.’ It’s meant to be for the people who don’t experience it so they can get an understanding of what this really means.

I think that’s also a misconception, is that this play is an appropriation, and I can understand why that was felt that way in Edmonton because of the exclusion. I really believe the Indigenous community in Edmonton was excluded and had to force a dialogue. In this production, Imago is inviting the dialogue and started it long before it got to Montreal.

Are you looking forward to the dialogue that’s going to come out of it?

Yes, that’s actually what I’m looking forward to. I’m loving being in the room with everyone. We’re laughing a lot — I mean, you have to — and everyone’s so beautiful. This isn’t just a job for any of us; we’re all doing it for our own reasons, and I think to me that’s the most powerful part of doing theatre and art, is the passion. But the dialogue is what I want to hear. I’m about the voice. All my work is surrounded around a voice.