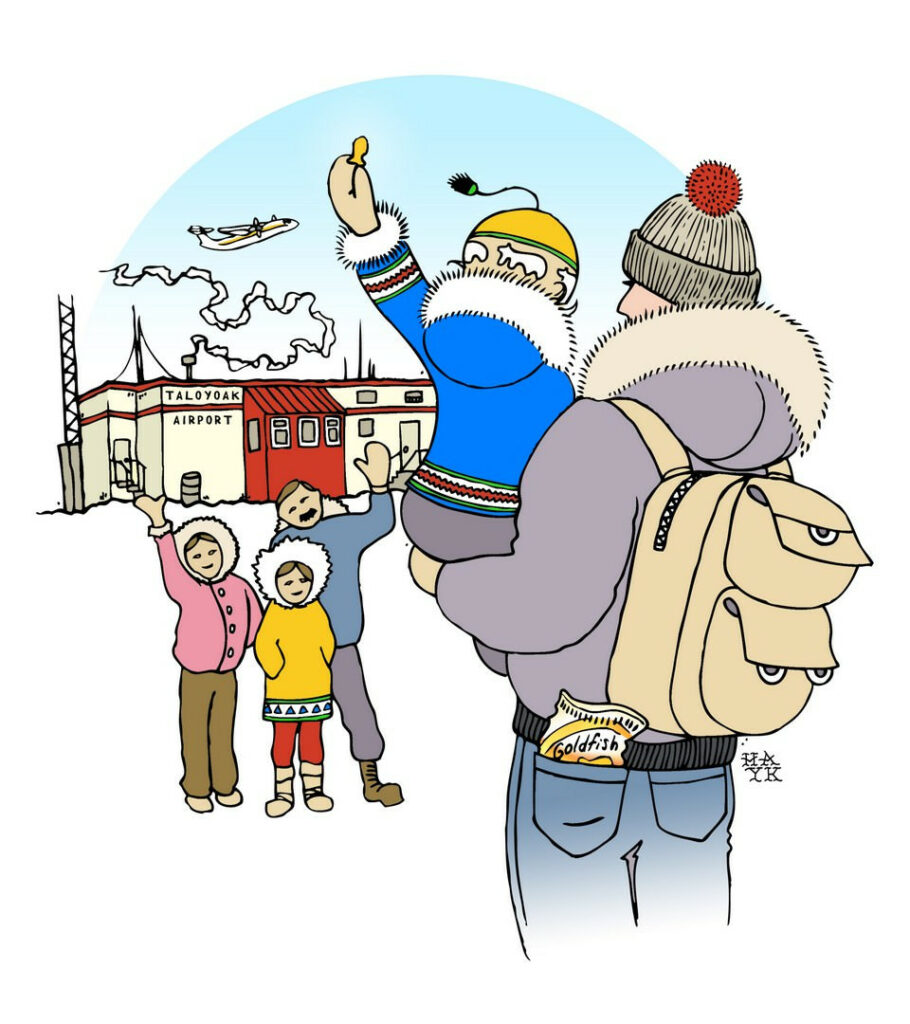 It was a warm, sunny day when the plane took off from Yellowknife to the Inuit community of Taloyoak on Nunavut’s Boothia Peninsula (Taloyoak means “large blind” in Inuktitut and refers to a stone caribou blind, or a screen, used for harvesting caribou). The community is located about 1,200 km northeast of Yellowknife with a population of about 850 Netsilik Inuit, descendants of the ancient Thule culture. I was going there as a freelance sound technician, flying with hundreds of pounds of equipment used for translating Inuktitut and English at meetings throughout the North.

These communities are remote – only accessible by air, boat or winter road – and because of this isolation, there are Dene and Inuit who live as close to a traditional lifestyle as the modern day will allow. Even though I’ve lived my whole life in the North, there are still times where I’m reminded of the dramatic, and sometimes stark, differences between contemporary North American and traditional indigenous cultures. My trip to Taloyak was one of those times.

The First Air ATR banked north and flew high into the deliriously blue sky. I watched the trees became smaller and smaller until they were reduced to shrubs somewhere around the Arctic Circle. The incessant drone and vibration of the turboprop engines and a poor choice of reading material put me to sleep about half way through the first leg of the flight. I woke up to my ears popping as I felt the plane banking hard to port. Looking out the window I saw that we were landing in the community of Gjoa Haven for fuel and passengers; maybe to drop off some freight.

I stepped off the airplane and was greeted by a slicing cold wind, the intense sunlight reflecting off the infinite expanse of snowpack, boulders and sea ice. I passed through the small terminal shed that housed the check-in counter, a few chairs, the weather station and a pay phone. I lit up a smoke in the parking lot and marvelled at the stark barren landscape that made me feel as if I was smoking on the moon. I made my way back into the terminal where the pilot was on the phone, scribbling furiously on a clipboard. There was a young Inuit couple sitting on a bench by the window playing with their young son, a toddler of maybe 10 or 12 months. They studied me when I entered and had a quiet conversation between themselves while I looked over the faded, dog-eared regional aviation map that was pinned, stapled and duct-taped to the faux wood-panelled interior. A minute later, the father approached me, asking if I was flying to Taloyoak. I said I was.

He explained that he and his wife wanted to drive their dog team to Taloyoak for a winter carnival happening there next week but could not take their young son with them. He asked if I could help them out by escorting his son on the flight to Taloyoak where his grandparents, aunts, uncles and cousins would be there to meet us. I looked over at his wife and she smiled at me. I said, “OK, as long as the pilots are good with it.”  The pilot shrugged and said it was fine.

The couple changed their son’s diaper and filled up a milk bottle. Mother and father snuggled him for a moment, then handed him to me. He looked at me quizzically but otherwise made no fuss, even as we walked out of the terminal and onto the tarmac. I placed him in the window seat and unzipped his parka. Strapping myself in, I strained to recall the games I’d played with my daughters some 20 years ago. Because the boy was too small to sit in his own seat, I held him in my lap. Even though we were complete strangers, I felt the same nurturing and protective instinct that I felt for my own children. The ATR engines fired up; turbo props howling, plane shaking. The boy was spooked so I reassured him as best I could, holding his small body to the window so he could look out onto the land and sea ice as we took off.

Our trip to Taloyoak was only about 30 minutes. Even so, I was running out of games to keep the little gaffer occupied, digging deeper into my travel bag for things to play with.  When we levelled off, one of the pilots passed out a variety of juice boxes and small packets of Goldfish crackers, giving an extra package to us. The boy sipped at the box of grape juice and for the rest of the trip we played games with those goldfish. I threw them into the air and tried catching them in my mouth. I arranged fish circles and fish shapes on the fold down tray. He’d put one cracker his mouth, pull it out again and proudly hold it out to me, the Goldfish cracker reduced to a mushy orange ball in his tiny fist.

In a quiet moment while the boy gummed at my key ring, the thought struck me that the plane could get weathered out of Taloyoak, or worse, return to Yellowknife after some mechanical failure. I had no idea who the young couple were, their names or identities, and I rehearsed the conversation in my head with my wife as I stepped off the plane in Yellowknife holding a young Inuk boy in my arms. But this wouldn’t be necessary. The boy ate the last goldfish as we landed at our destination.

I zipped up his parka, scooped him into my arms and headed towards the terminal. Inside, it was packed full of Inuit elders, children and families who, it seemed to me, were all related to the young boy. I passed him to the first woman who rushed up to us with a warm smile and arms outstretched. She smothered the young boy with kisses while the others looked on. Watching him become absorbed by the family as they filed out the door in his auntie’s amauti, I thought maybe he would look back to me, kind of like a Disney moment. But he was so caught up in the enthusiasm of being united with his family, he had already forgotten his travelling companion.

I was left alone in the terminal, reflecting on this experience while waiting for my gear to be unloaded from the airplane. I shook my head thinking about how the young Inuit couple had entrusted me, a total stranger, to escort their son on an airplane, how the boy was so comfortable with me and how his family and community were there to greet him, to celebrate and nurture this young life. Today, when a steward or stewardess offers up a bag of Goldfish crackers on a flight, I hang onto to an extra pack in case there’s another young traveller in need of a distraction.

Pat Braden is a musician, storyteller and freelance sound technician, who for 51 years has called Yellowknife, home.