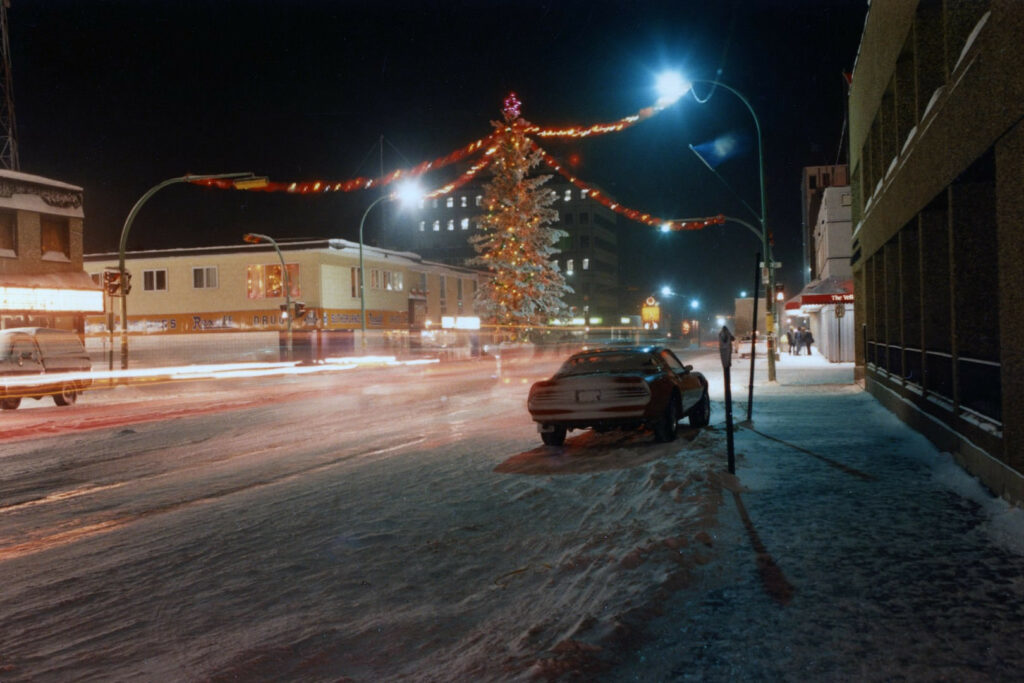 For more than a decade, the City erected a giant Christmas tree in the centre of its busiest intersection, much to the delight, and consternation, of residents and motorists. | NWT Archives/Terry Foster fonds/N-2009-006: 0037

If you’re of a certain vintage of Yellowknifer, you’ll recall a giant Christmas tree used to appear smack dab in the middle of the busiest intersection on Franklin this time of year.

Towering above 50th and 50th – four strands of shimmering red garland stretched from its star to the roofs of surrounding businesses or light standards like a mammoth maypole – the merits of the spectacular spruce were certainly in the eye of the beholder.

“I just loved it, it drew the entire community together,” remembers Shari Dives, who thinks the tree was there when she arrived in Yellowknife in 1977, and continued to make Christmas appearances throughout the ‘80s.

“It’s such a dark time of year and everyone seemed to be hibernating, and then the tree went up and the lights came on and people you hadn’t seen in weeks were back on the streets again,” says Dives, who now lives in Enterprise. “All of a sudden it was this mid-winter festival and it was all because of the tree.”

Like the big hair and glam rock of its ‘80s era, the tree’s largesse and importance as a holiday symbol seemed to supercede its obvious traffic implications.

“Thankfully I wasn’t of driving age at that time,” laughs Mayor Mark Heyck. “It was quite a sight to behold, people trying to decide, ‘do I turn before the tree…?’”

Still, nostalgia runs deep and in recent years City Council bounced around the idea of resurrecting the tree in the same location. Given that the city’s population has doubled since that time, Heyck says “common sense prevailed” and a tree was installed in front of the Greenstone building as a compromise.

“Don’t bring it back. It was stupid,” says Yellowknifer Robin Weber, who remembers the confusion it created for drivers.

“I am damned if I know,” responds former mayor Dave Lovell when asked the correct way to make a left turn around the tree. “Either way there’d be a blind side. It was just how you were feeling at that particular moment.”

Lovell says the tree also obscured the only traffic lights in town at that time. While he can’t recall any collisions, there were a few standoffs between vehicles, “like two bulls facing off,” which he thinks led to the tree’s demise.

Dives’ recollection is that accidents did happen. Big trucks seemed to be able to negotiate the tree, “but it was the little tiny cars that thought they could just whip around and when they got nailed, they got nailed good.”

She says the proper procedure for left turns is to go past the tree.

“I was raised in California and in a lot of cities like San Francisco they have pedestals in the middle of the street to have a traffic cop and you never turned in front of the cop, you went past the cop and turned.”

Similarly, but reversed, for drivers in London’s Trafalgar Square, “go past Lord Nelson and make your turn,” she says. “All the rest of the world understands how to turn around an obstruction in the middle of the road.”

While the City Hall lights were lit last night, and the Telus tree now graces the Civic Plaza, Coun. Adrian Bell and the mayor both say more holiday festooning needs to happen along Franklin, possibly in the lot recently purchased by the City at the main intersection.

Bell has no sentimental longings or wistful memories of the big Franklin Christmas tree of his childhood.

“I think what was more important to me at that time was the toy store in the basement of the Bay. That’s all that was on my mind.”