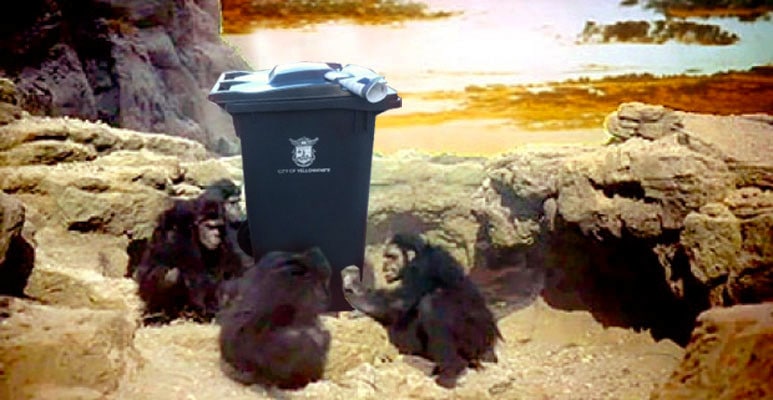 After months of clamouring for sweeping changes to how the City provides services to residents, Yellowknife denizens experienced shock, fear and anger at the unveiling of a new waste-collection program.

Last week, new black garbage bins – designed to streamline waste pick up and lower the cost of the service through increased automation – were delivered to households in Yellowknife, and the reaction to the rubbish refinement was swift and hysterical.

Don Gossamer, and employee for the City who helped deliver the bins didn’t know what to make of it. “The very first house I delivered to called the cops. They thought the black bin might contain explosives,” said a bewildered Gossamer. “Others were worse. One family cautiously ventured outside to inspect their bin, still in their pajamas, and began jumping up and down and beating the bins with rudimentary tools. The primitive screaming was surreal.”

Chaos ensued once the entire city woke up to find the waste bins. By lunch hour several makeshift gangs had formed, roaming the city and setting fires in the new bins.

Residents assembled at an emergency town meeting called by the City in hopes of dispelling some of the myths regarding the bins, as well as stemming the tide of violence sweeping the city.

Residents screamed their concerns to a bewildered town council. One resident, who identified himself as the leader of one of the garbage gangs known as the Riff-Raffs, said the new bins would fall prey to wild animals, such as bears and possibly lions.

The City’s assurance that the bins had been successfully used in Whitehorse and that wildlife had not been an issue only created greater fear.

“WHAT IF THAT JUST PISSES THE BEARS OFF EVEN MORE, AND THEY COME AFTER OUR CHILDREN FOR BLOODY RETRIBUTION??!” screamed a concerned parent holding a pitchfork.

The meeting came to an abrupt end when the Riff-Raffs set the podium on fire and threw it through a window.

In addition to the new garbage bins, the City says it will introduce a new bylaw limiting gang sizes to no greater than 12 people.

The fall, and artistic rise, of Kosmos 954