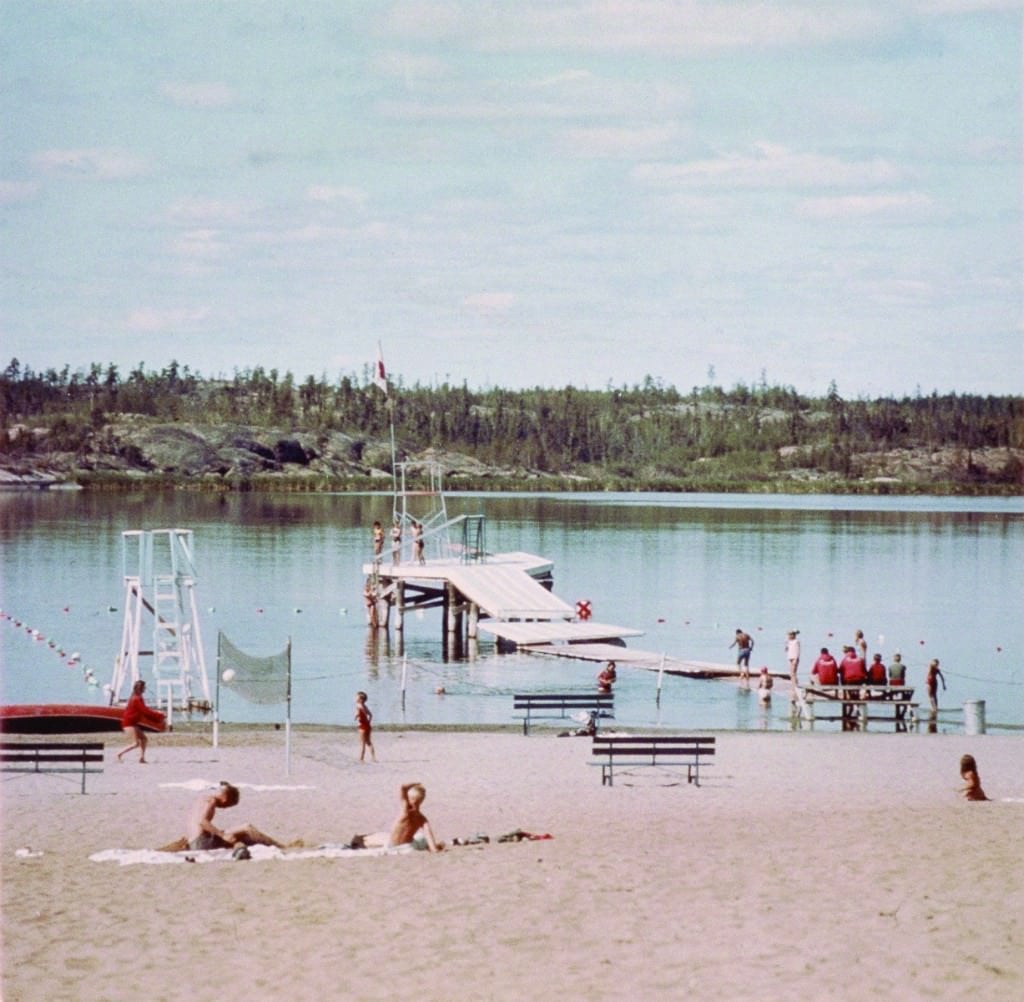 McNiven Beach on Frame Lake had change houses, rafts, diving boards and a fenced wading area for children as shown in this 1967 photo by Ted Grant. NWT Archives/Northwest Territories. Dept. of Information fonds/G-1979-023: 0146.

I grew up on the shore of Frame Lake, in a two-storey house at the bottom of Matonabee Street. It was the late ’70s and people still used it. In the summers, McNiven Beach was a place you could get to from anywhere in town on your banana-seat bike. Older kids would sit on the rocks above the white sand and smoke and neck while the elementary school crowd cavorted on the water’s edge. I learned to sail on the lake, in a Grumman canoe fitted with an eccentric sailing rig, and spent hours canoeing, swimming and exploring along its shores and islands. In the winters I skied across it to get to the countless trails that surrounded the lake. Before the development of Frame Lake South, it was easy to think of it as a cosy wilderness, a few feet from my front door.

Even then, though, it was a dying body of water. Traditional knowledge from Yellowknives Dene says it was once home to pike and whitefish, but there were certainly no fish when I was playing down around the cattails, catching tadpoles. And you had to be careful where you went into the lake-waters, lest you step in foul-smelling, knee-deep sediment (reading about what that sediment may be composed of in Mark Rendell’s report below makes me gag; I can still vividly feel the stuff’s gloopy embrace on my feet). The diving dock and lifeguard structures seen in Ted Grant’s 1967 photograph were long gone.There were lurid rumours: a friend’s cousin’s sister went swimming there once and came out and was covered in leeches! One of the islands was home to a Today, the lake is surrounded by a much-loved, much-jogged trail system, and where the Gerry Murphy Arena once stood, Somba K’e Park hosts civic events, dog walkers, and office workers on their lunch breaks. But McNiven Beach is mostly overgrown, a dusty patch of sand behind the pool. If I tell people I used to swim in the lake, or that my father used to go for his afternoon sails on it, I’m met mostly with raised eyebrows. As a city, we’ve largely disengaged from this little jewel in our midst.

In the 1990s, the City struck a task force to look into why the lake was so void of life, and to investigate ways to fix it. Since then, scientists from the department of fisheries, the GNWT and southern universities have slowly been building up the knowledge required to bring this once-vibrant body of water back to life. Today, the department of environment and natural resources announced that the Royal Bank is kicking $40,000 towards the Frame Lake Rehabilitation Project. This cash injection, according to Steve Ellis of the NGO TIDES Canada (which is managing the project funding), means the research could be complete within a year or two. Once whatever it is that’s killing the lake is dealt with, it could be repopulated with fish — who knows, perhaps then you’ll see local kids back at the beach again, or fishing out on the lake. — Matthew Mallon

Below: Mark Rendell spoke to Steve Ellis about what’s killing Frame Lake, and what can be done to fix it. So why is the lake dead?

The scientific jury is still out on the exact cause of Frame Lake’s desolation, but according to Ellis, it has to do with the fact that every winter, around January or February, the lake runs out of oxygen. No oxygen, no fish.

It’s not unusual for oxygen levels to go down a bit when a lake freezes up. But the total lack of oxygen suggests there’s something else at play. The apparent culprit? Several feet of “ugly black goop” in the deeper basins of the lake, gobbling up oxygen as it rots.

According to Ellis, it’s unclear whether the goop is naturally occurring or not, but one leading hypothesis ties it to the human waste that was dumped for over 30 years into Niven Lake, which flows into Frame Lake through the little stream running by the visitor’s centre. Between 1947 and 1981, Niven Lake was something like Yellowknife’s privy – and while some people say this added to the richness of Niven’s ecosystem, it may also have led to the buildup of grime now sitting at the bottom of Frame Lake. To dredge or aerate?

Right now, two ways of dealing with the lack of oxygen are being contemplated: dredge the lake and remove the sludge directly, or put in aerators to keep part of the lake open in the winter and pump oxygen into the water.

Dredging seems like the more permanent solution, says Ellis, and it would likely only take about two weeks for a boat to scour the lake’s deeper basins holding most of the goop. Aerating is “more of a band-aid solution… and keeping the water open in the winter is a bit of a safety concern,” he adds. Whichever method the GNWT and the City decide to use, once the lake is oxygenated year round, pike and whitefish can be reintroduced.

Over the next year, there’s going to be some community consultation about the remediation project, but as Ellis says, supporting the project “seems like a no-brainer.”

“We’ve got a lake in the middle of the only urban centre in the territory, with half the territory’s population seeing it almost every day. The City and the GNWT seem excited. You could have kids fishing and it could be a draw for tourists.” — Mark Rendell