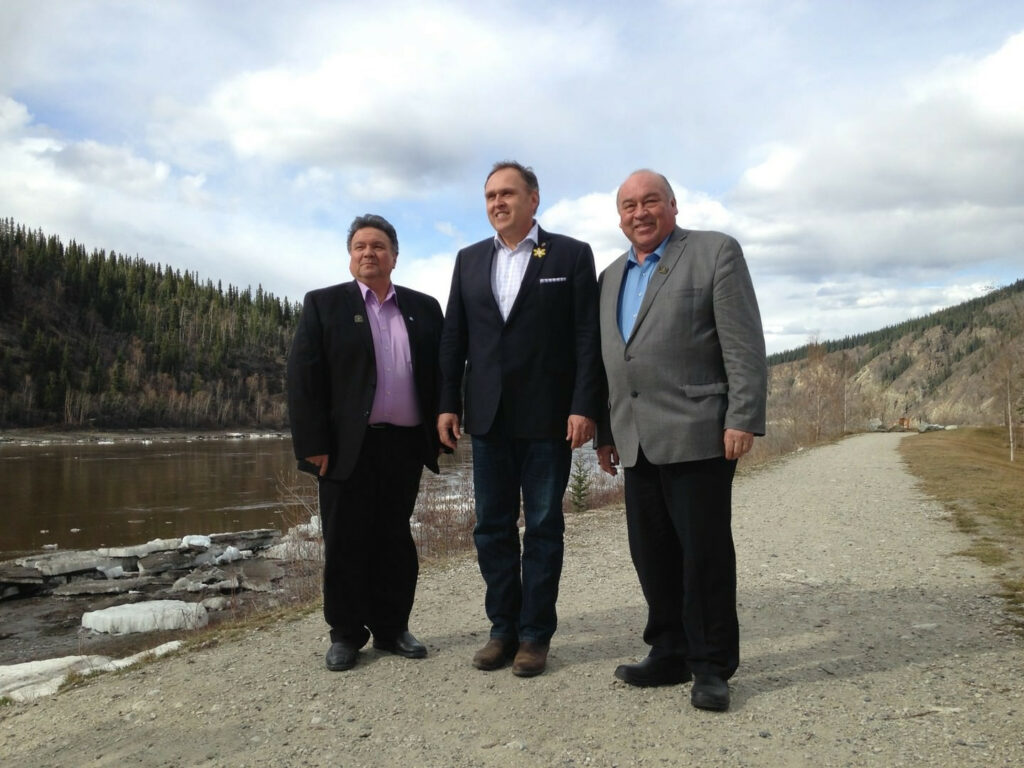 Pity the three large men in suits who have to work the room in a cramped and sweltering art gallery. Even people in t-shirts are sweating.

The three northern premiers have crashed the annual gallery opening showcasing the work of students at Dawson City’s tiny School of Visual Arts (SOVA). Despite the heat, there are fewer set pieces easier for a junket-riding politician than the annual congratulating of the grads.

“Partnership” is a term that always comes up, representing as it does the magic elixir of federal-territorial relations. In this context, the word really means “money.”

Yukon Premier Darrell Pasloski, the host of this year’s Northern Premier’s Forum, and by far the most comfortable of the three at the flesh-pressing of retail politics, offers a few words and introductions as a student’s self-portrait on canvas peers over his shoulder.

As the premiers and their respective staff mill about, NWT Premier Bob McLeod appears to get a kick out of an outdoor installation that consists of several garbage bags taped together and the words “You are fat” duct-taped on the side. In art, as in politics, there is no accounting for taste.

The setting changes from year to year (after rotating through the three capitals, last year’s forum took place in Kugluktuk), and the communique issued at meeting’s end has a different focus, but otherwise the Northern Premiers Forum has settled into a predictable routine.

This year, the resultant centrepiece is A Pan-Northern Approach To Science, a document that essentially catalogues existing research assets in the North and makes the worthy call for northern science to be useful to people who live here and make use of their traditional knowledge. It calls for “solution-driven, needs-oriented and partnership-based” science. If our best and brightest scientific minds can one day crack the mystery of intergovernmental bafflegab, so much the better.

“Partnership” is a term that always comes up, representing as it does the magic elixir of federal-territorial relations. In this context, the word really means “money,” as in “we need more of it,” which is a perennial problem for the dependents of Ottawa. The premiers almost always approach this issue in make-nice terms, which is wise when you lack the constitutional clout of a province.

However, the premiers were understandably still smarting after the recalculation of the Territorial Formula Financing agreement in December, which threatened $91 million worth of cuts across all three territories ($67 million of that was eventually restored).

While this year’s federal budget showed that Ottawa’s spending taps will open, especially for infrastructure, McLeod signalled that the territories need the Trudeau government to be particularly generous to the North.

“We constantly have to preach that funding should be on a base-plus basis,” he told reporters during an earlier news conference. “We can’t see all of the infrastructure money being allocated on a per capita basis and have all of the funding for infrastructure go to larger provinces like Ontario. It’s a constant battle for us to make sure the federal government is aware of that reality.”

To illustrate why this is a problem, just look at the breakdown for the $3.4 billion in new federal transit funding, which was determined strictly by ridership numbers. The NWT got just $320,000, less than the cost of a single new bus.

Otherwise, you know the talking points. The territorial economies continue to struggle, the cost of living remains high, we need new infrastructure. Strong, healthy communities — you will doubtless be surprised to hear — are good.

Carbon pricing on the other hand continues to be bad. All three premiers unanimously continue to insist there is no possible outcome for a carbon tax other than completely ruining the territorial economies. McLeod insisted there are other ways to reduce greenhouse gas emissions in the North, without giving specifics.

With negotiations on a promised federal carbon price apparently off to a rocky start, the northern premiers can probably safely cling to this line of reasoning for a while. But as Nunavut’s Peter Taptuna noted, territories are already paying carbon taxes when they buy goods and services from the south. Four of the five provinces that act as gateways to the territories already have some form of carbon taxation (Manitoba being the exception).

At some point, though, the territories are going to have to reckon with some manner of alternative: cap-and-trade, increased regulations, a full-blown phase-out of diesel-fired power plants and/or a system of tax credits and income supplements to offset the pain of carbon pricing for consumers.

Who will pay for those last two? The feds, probably.

On with the show

At last the SOVA opening disperses, the participants bound for another event featuring the students’ audio-visual works. The premiers, governors of all but their own itineraries, take their leave, citing an early-morning flight to Old Crow.

Before he departs, McLeod signs the SOVA guestbook offering the best wishes of the NWT’s Premier. The entry reads: “Great event!” 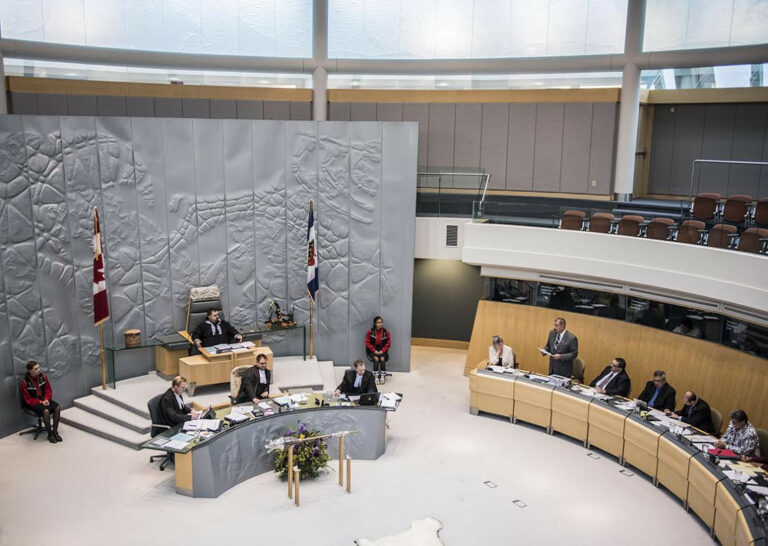 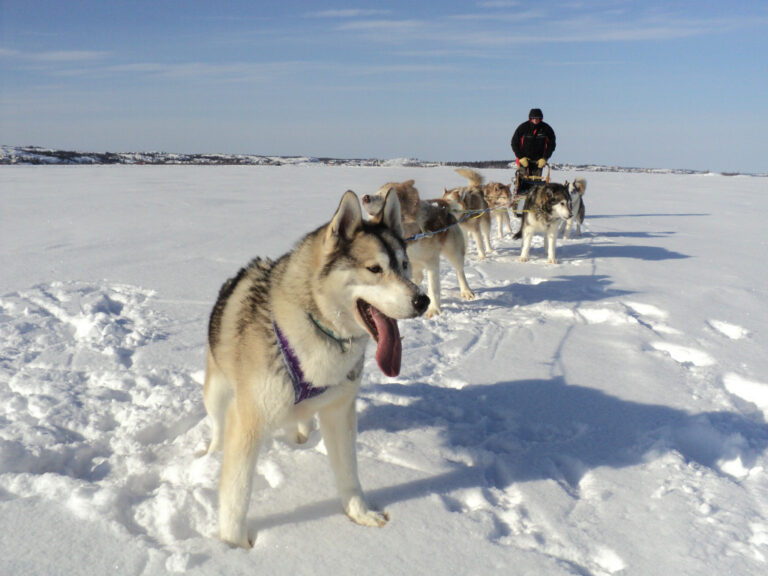 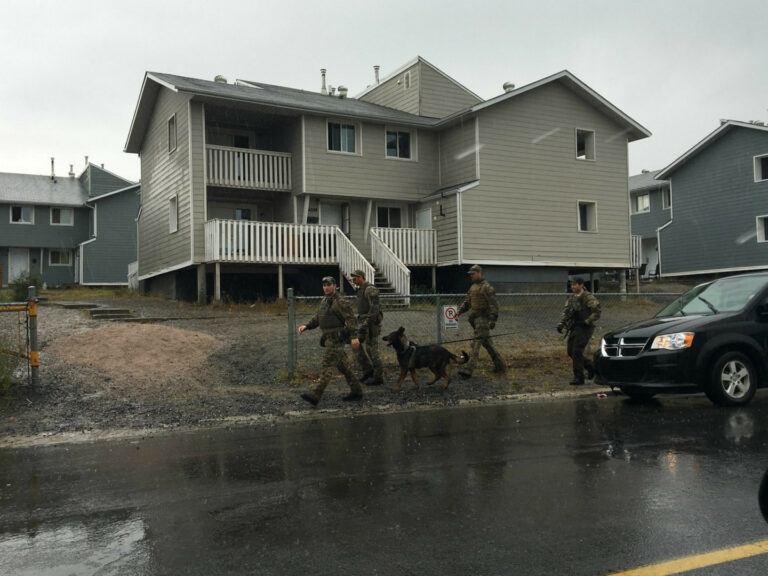 Accused Killer On The Loose: Where Are Our Leaders?