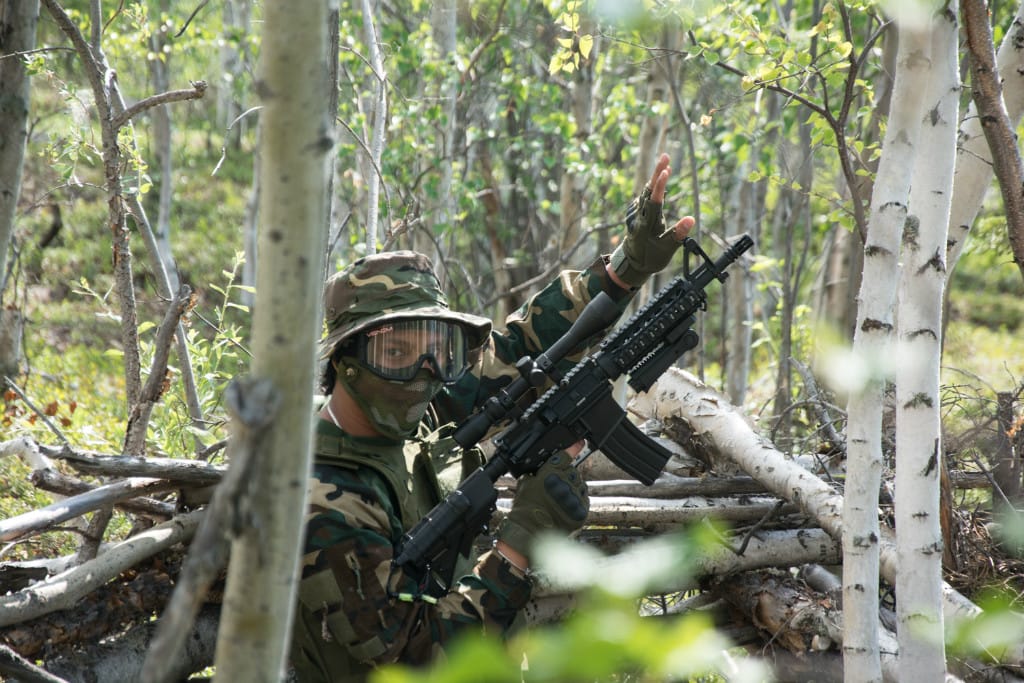 “Thirty feet should be good.”

“Ok, lower back or butt, please. Don’t shoot me in the neck.”

I ramble up a sand-strewn path, stop and wait for the shot. There’s a slight popping sound, then a bee-sting pinch as the 6mm ceramic bead slaps into my back. Ouch. Though not that bad, all things considered.

Behind me stand a group of eight guys and one woman, lined up like G.I. Joe figurines by a Ford F-150 brimming with an arsenal to make a cocaine baron blush: AK-47s, M4 assault rifles, Glock pistols and some nasty looking knives.

The guns and knives are not, of course, real. And despite the camo, bulletproof vests and tightly wrapped keffiyehs, this isn’t a newfangled guerilla group camped out by Cassidy Point and planning an armed insurgency against the GNWT.

I’ve been invited to the weekly Sunday shoot-em-up with Yellowknife’s Great White North Airsoft Club. Think paintball. But with hyper-realistic propane- or electric-powered guns that shoot little beads at around 300 feet per second, and with much, much more attention paid to the intricacies of military fashion. Some club members have invested up to $5000 in their outfits

“It’s the sport of looking as cool as military guys without killing people,” says Tyler Properzi, a 27-year-old construction worker who runs the club. “It’s a bit of a men’s fashion show as well. Guys will come out with a new gun and everyone’s like, ‘Oh! Can I see it?’”

One guy is rocking terrorist chic, another is dressed up in Russian Special Forces gear. The most elaborate costume belongs to 24-year-old Ben Schonberger, who works at Diavik; his array of guns and a “multi-cam” suit – which to my untrained eye looks like real military wear – set him back around $5000. (This is pretty exorbitant the others explain; you can get into the sport with an entry-level gun and some eye protection for several hundred dollars.)

The group, which has been around for about 10 years but only recently became incorporated, meets every Sunday at a sandpit just off the road to Cassidy Point, out along the Ingraham Trail. Today there are 10 of us, myself included, but sometimes as many as 20 people show up to compare kits and play a variety of games, from capture-the-flag to all-out skirmishes.

I came into it with a certain level of skepticism, generally feeling uneasy around dudes with firearms fetishes – but, oh, is it ever fun. The first game we play is called “Soup Nazi” – a reference to the iconic Seinfeld character. It’s basically blob tag. Each player starts on their own, but when you shoot someone they join your team, and so on until everyone is on a single team and the game ends. After a few rounds we switch to “Downed Pilot,” in which one person, the pilot, runs and hides while the two teams race to find him and bring back to a checkpoint. With propane- or electric-powered guns firing beads at 300 feet per second, eye protection is a must

The games take place on a wooded ridge above the sandpit, spotted with birch, makeshift barricades and stellar views of Prosperous Lake. I spend most of the time getting bitten by the horseflies of enemy fire while fumbling about in my jeans and sweating through my tee shirt. But I land a few hits here and there.

During the games everyone wears eye protection and something to cover their mouths: a mesh mask, a scarf. Still one guy takes a pellet to the bridge of his nose in the second game and begins to bleed; I catch a one on the cheek during “Downed Pilot” – there’s still a small red mark there three days later. They make you sign a waiver warning “this activity involves risk of serious bodily injury, including permanent disability, paralysis and death,” but in general, Airsoft seems no more dangerous than any number of contact sports. Not everyone running around in the woods is a man

All told it was a highly enjoyable way to spend a Sunday afternoon. Sure it’s a bit goofy, running around with a bunch of fully-grown men pretending to be Rambo. But it’s better exercise than loafing on the couch playing Call of Duty. And while being keen, perhaps to a fault, about guns and gear, the group is welcoming, unpretentious and aware of how other people view them.