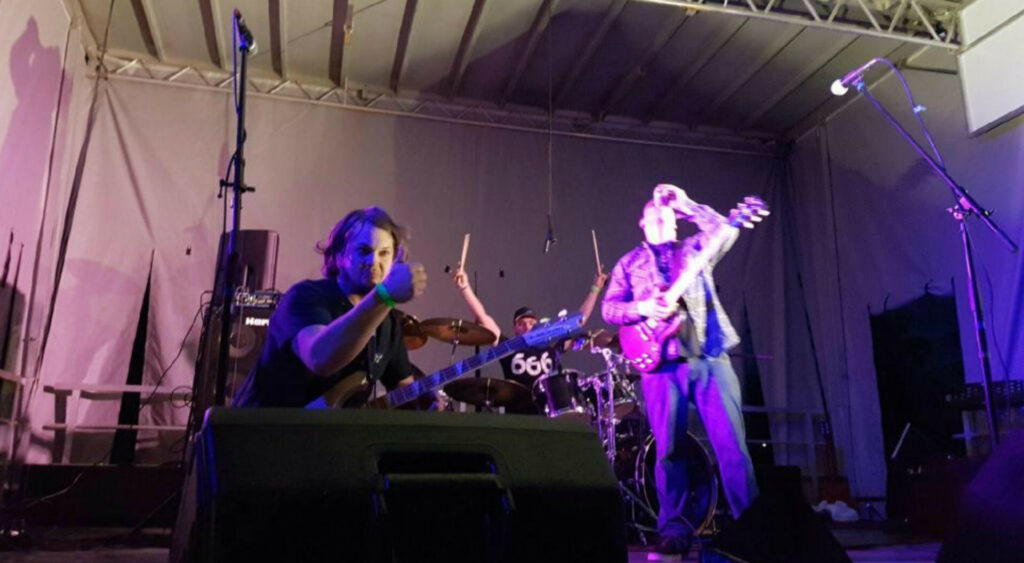 Above the whiteboard scribbled with self-deprecating references to songs with no names, a creased 8.5 x 11 of the late Lemmy stares down at the room, the sharpie-scrawled words below him demanding ‘Play Harder.’

The DIY motivational poster is just one of the the many scraps lining the walls of LiverFight’s studio in Fort Smith, a Tyvek-wrapped shed that drummer Colter Freund, a carpenter by trade, built out of the leftover materials from his house. Hidden away from a mechanic’s shop across the highway from town, it’s the band’s last refuge from sound curfews and rules against indoor smoking and drinking.

The homemade shack is a testament to over 12 years of playing punk in a small town, where the do-it-yourself ethos behind the genre is reinforced by a nearly non-existent scene that means even the motivation to keep playing has to be DIY.

“Bands [that come from small towns] try a bit harder,” says lead vocalist/guitarist Shawn Hudson. “You’re in the middle of nowhere. It helps your drive. You don’t take things for granted because nothing’s given to you. But it’s tough, at the same time, because there is no scene.”

It’s been five years since the South Slave Friendship Festival, once Fort Smith’s biggest summer draw, packed venues all over town with live music from across the territory and down south. Bars, which used to feature regular jam nights, have closed. The arena, which housed the biggest concert of the year, almost burned down.

But the once vibrant Fort Smith music scene might be finally making a comeback.

The hard-hitting punch of Private Stock

If you’ve ever held a bottle of cheap, fortified port wine to your mouth, you are likely drinking with one intent: balls to the wall drunkenness.

Private Stock is the kind of sweetly toxic garbage you will pour down your throat while hiding out in a baseball dugout at night (or during the day, if you’ve nothing else to do). The bottle is plastic so you can’t even break it in a bout of rage, cathartic joy or self-loathing.

“If I didn’t start drumming I’d probably be in jail or something.”

It’s also the name of Fort Smith’s newest music festival, a gritty setup off of the highway where bands like LiverFight and hometown hard-rockers State of the Art, the NWT’s most prominent metal band, make their own party.

“It’s eclectic, vibrant and neglected,” Brandon Kikoak, the event organizer and a member of State of the Art, says of Fort Smith’s music scene. “You wouldn’t know about it unless you get in the underground circle.”

This coming weekend will be the third incarnation of the growing festival. The first, which included the unforgettable burning of a massive pallet structure named Bannock Man, was held in the backyard of State of the Art’s studio. Now it’s in a much more massive lot of an autobody shop. This year the lineup includes 10 acts, all local and — aside from artists like Veronica Johnny (of The Johnnys) and State of the Art — mostly unknown to anyone who isn’t a closet shred head, featuring styles ranging from the grungy acoustic to funky classic rock.

“There are people who were always on the fringes now becoming full-fledged performers,” Kikoak says. “The guys who were all part of the jam scene — super talented people — now have a place to play. This is something to work for.”

The guys of LiverFight originally got together around 2003 under the name of OverEight (a banner legibility issue led to their current moniker), but have been jamming since their teens, when Freund upgraded from pots and pans to a legit drum kit.

The punk/metal band has a progressive sound elevated beyond the crusty four-chord progressions of standard punk rock. Though they used to write a lot of political lyrics — “about stuff that pissed us off or scared us,” Freund says — these days Hudson says they write more about things they feel.

“And those things have nothing to do with modern politics.”

Along with bassist/vocalist Joel Mercredi, the trio got its start like almost every other punk band: boredom and angst.

“If I didn’t start drumming I’d probably be in jail or something,” Freund says. They’d often skip school to jam for entire days at Freund’s grandpa’s warehouse, a paradise for skater kids in a small town and site of “some of the best times ever.” Only once did they get evicted for being too disgusting.

“We still have the note,” Hudson laughs. “It said he was so disappointed but if we cleaned and painted we might be able to come back. We were spoiled.”

Over a decade later, the need to go to the studio right after work (or in lieu of, occasionally) is still there, even without a cohesive scene or even a stage to perform on.

“We need to play music,” Hudson says. “It’s therapeutic. It’s always been our fave thing to do…since we stopped skateboarding.”

While small-town life is the hated muse of many a musician, Kikoak says his outlook has changed over the years as he’s gained an appreciation for the South Slave music scene.

“The small-town experience develops your outlook when you’re a young person. The city is this romantic, magical place. Up here, you have a view of it; it’s external and you want to be part of it. A lot of people in small towns feel like that,” he says.

“But this region is different than other regions. There’s an underground scene that I haven’t seen other places in the North. It’s not a competitive environment; it’s a community, which I think is unique, too. In the city, people act like jerks. Here, it’s more like camaraderie.”

Aside from his role as frontman in State of the Art, Kikoak is president of the new Fort Smith Music Society, established in the spring to drive musicians from their sheds and garages and get live music back on the public stage.

The society celebrated its inauguration with a one-day concert in June, featuring musicians from Hay River and Fort Smith, managing to draw out a packed crowd despite torrential rains.

There also seems to be some momentum in getting the struggling Friendship Festival back up and running. Kikoak says he’d have no problem giving the festival back its traditional August slot, adding that Private Stock has no ambitions of replacing the legendary event.

“They’re two different animals. One’s a buffalo and one’s a porcupine; the Friendship Festival is more country and folk, and we’re more indie rock and metal. They both co-exist,” he says.

Now with new management taking over the town’s last remaining bar, Kikoak hopes to reignite jam nights hosted by different members of the musical community with varying styles, along with other live events throughout the winter.

The talent in these groups is palpable. It has potential,” Kikoak says. “We’re hoping more people start wanting to get out and play, because the music society has big plans.”