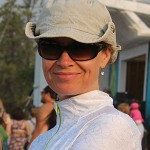 An 1,800-kilometre road trip from Okotoks, Alta., to Yellowknife can take the shine off a family summer vacation. It’s dangerous territory inside a car with three boys with low boredom thresholds once the chocolate chip cookies have been demolished and iPod batteries are as exhausted as an NWT firefighter. A little distraction was needed. Enter Vulcan, god of fire, who had decided to throw his annual party in the Northwest Territories, again.

The dense, smoky veil of the growing inferno, miles of charred trees, pockets of fire and smouldering stumps— it was like something from a post-apocalyptic video game. We were in awe. The pilot cars assuaged any anxiety we might have had. It was the nearest we’d ever been to enjoying a presidential cavalcade-style escort. However, all our smugness soon evaporated as we clawed at our dry throats and our vehicle convoy disappeared into the smog. I like a bit of drama though and Vulcan’s twisted idea of a good time wasn’t going to stop me from getting to the Folk on the Rocks Festival.

The skeeters also made a respectable attempt to thwart us, but they were no match for the electronic swatters we discovered at Captain’s Cabins near the Deh Cho Bridge. We bought some in town — it was the best money we spent in Yellowknife. The boys spent hours frying the critters, grading them on their electrocutability as “poppers,” “smokers,” “cracklers,” or “duds.”

Yellowknife immediately endeared itself to us; a family with an air force history, the first sighting of the Bristol Freighter was a good start, with a great story. Further in from the vantage point of Pilot’s Monument, the float plane traffic was particularly captivating, and of special interest to my husband who had long developed a passion for them having read Graham Coster’s Corsairville; the true story of a village that sprang up in the Belgian Congo in 1937 to accommodate a team dispatched to salvage a crashed Imperial Airways C class flying boat.

There’s nothing frivolous about Yellowknife, it is function over form — the Leatherman multi-tool of cities. If you’re here, you have a challenging job, be it in oil, mining, firefighting, air transportation, tourism, or just plain living. It’s an interesting paradox that the people who live here are a tough breed and yet somehow still vulnerable to the annual siege of fire and ice that threatens the arterial highways that help keep Yellowknifers supplied. If the townsfolk were worried though, they weren’t showing it.

Days behind the wheel getting to Folk on the Rocks meant we had high hopes. I noted festival director David Whitelock was already a bit of a celeb in town, and deservedly so. That gig was a blast. I’ve been to my fair share of music festivals, but Folk On The Rocks was a uniquely intimate experience. Standing so close to the performers on stage was a rare treat for us. We enjoyed watching musicians crowd-mingle in between sets, and sitting to take in the other performances. At Glastonbury Festival, England, you’ll be lucky if the lead vocalist’s head appears bigger than a breadcrumb. The Yellowknife experience was worth every smoky, dusty, bug-smashing mile. Kudos.

Yellowknifers are rugged souls—baked and frozen, tried and tested, a little rough around the edges, like uncut diamonds, with a big Canadian heart (except the one who put the name-and-shame property tax arrears list on the Ruth Inch Memorial Pool notice board. But I guess he or she was just following orders).

We’ll be back one winter. Perhaps then the days are only 20 minutes long, eh, so we might see the northern lights. In the meantime, thank you Yellowknife for the music, your warm and affordable hospitality, and a little real-world perspective courtesy of Mother Nature. Cheers, from some of the newest, proudest members of the Order of Arctic Adventurers, North of 60 Chapter.

Amanda Brown is a writer and copy editor living in Okotoks, Alta. She hails from London, England. A 20th Century graduate of the London College of Printing, she is still bumming around to this day. She has a great deal of fun hauling her three sons and obliging husband around Canada in search of adventure, unique experiences, and broader horizons.