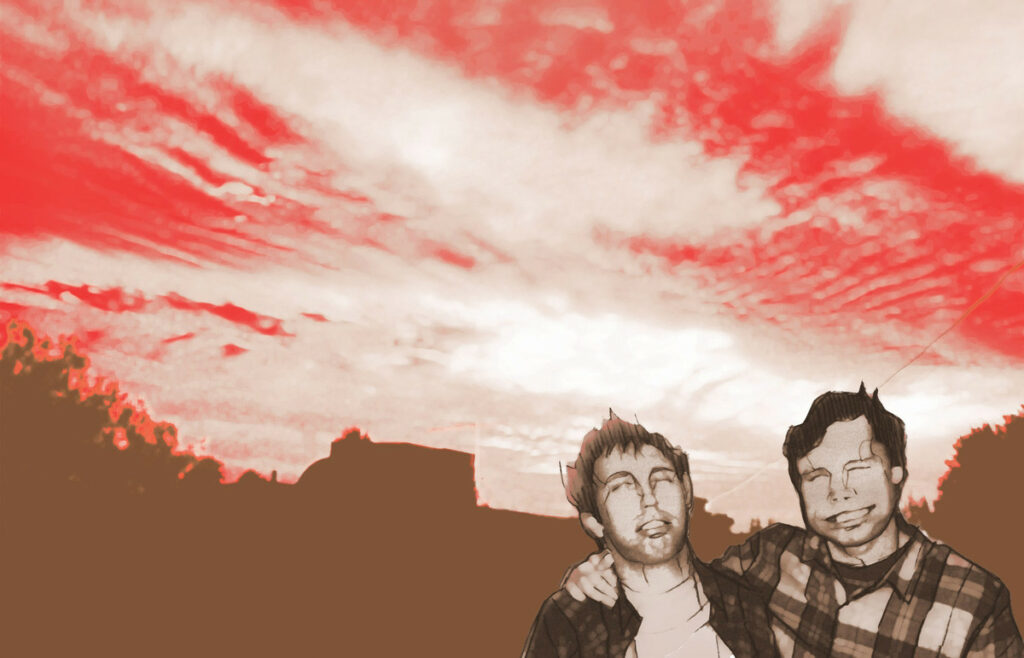 The bar vomits us all up at 2 a.m., sends us blinking into the sunshine. The sky is washed out with blue and pink and if the street wasn’t so empty, or maybe if you were tanked enough, you’d honestly think it was day.

Gregory’s almost tanked enough. He stumbles out behind me with a bummed cig dying between his thumb and finger, wearing the kind of grin you only get from leveraging Grade School Crushes and Last Night In Yellowknife for a drunken make-out with Trina LeShures, who was, arguably, the hottest girl in our grad class.

He’s been my best friend forever and I hate him so much.

“Ready to crash?” I ask him. He grins even wider. His nose is all red with smashed capillaries.

The cig burns down and scorches his thumb. He throws it down and we start walking the two blocks to my house, right into the sun.

We’re on my row of houses, all of the windows wearing blackout shades, sucking up the light how black holes do. I want to get into the dark and sleep off those nasty Jager shots. Gregory is probably going to pass out on the living room floor.

Then a truck pulls up and a guy with a beard says, “Hey. Hey, you boys. You seen a SUV hauling a boat?”

“Yo, wait, is that Brad?” Gregory asks, like he wanted a Brad for Christmas.

The guy peers out the window. “Gregory! You little bastard.”

Gregory knows him, which doesn’t surprise me anymore, ever, and Brad explains how him and his girlfriend had this huge fight and she drove off with the SUV, but his boat is still hooked up and he doesn’t want anything happening to it, especially because she’s had a couple.

“My house is right there,” I say, pointing in case Gregory’s forgotten.

“Last night in Yellowknife, man,” he says. “Come on. We gotta. Gotta, you know, help him out.” He’s got both hands on his knees like he might puke, which would probably deter Brad from letting us help, but then he swallows and grimaces and flashes the world’s least-convincing thumbs up.

Me and Brad and Gregory go for a rip around town and we’re just about the only pickup on the road. Gregory fiddles with the satellite radio and loves the first 10 seconds of every song. Brad offers us smokes in between compiling the list of places his girlfriend might have gone and leaving her a rambling voicemail. He strips the plastic off a new pack and struggles to pinch out the first one, eventually spilling half of them on the floor.

We wind up and around through the boxy metal warehouses and dead-eyed streetlamps and Gregory pushes his head up against the glass window, so he’s either getting nostalgic or he’s needing to hurl. The sun’s not going up and it’s not going down. Maybe he’ll miss that.

I’m about to tell Brad we should pack it in when he lead foots the brake and we shriek out a stop by the soccer field where our team used to scrimmage. Someone hopped the curb and there are tracks through the grass, and then down a ways is a shiny black SUV and a hitched boat, parked real neat by the goalpost.

“Damn,” says Brad, and he vaults right out of the truck. Gregory thumps the back of the seat, pumped up, and wrestles his way out of the seatbelt. I get out and follow behind them. The white lines need a repaint and I think about all the hours and all the cleat marks we stamped into this field. How Gregory got so good I still don’t know.

Brad’s girlfriend is sitting draped back in the boat, one hand over the side catching invisible spray. Her eyes are red and she starts crying, and then Brad is crying, too, and we give them some privacy by wandering towards the far goal.

Gregory takes a mock free kick, skate shoe scything the grass. He watches the invisible ball curl around a wall and bulge the back of the invisible net. He cups his hands around his mouth and cheers out loud.

“Screw off,” I say. And I want to say, screw your scholarship.

He shrugs and slings his arm around my shoulders. He’s sweating booze and it smells. “I’m going to really miss you, man,” he says. “For real. You better be down to visit me. I don’t care if you have to steal…uh, steal Brad’s boat.”

“Yeah,” I say, and I want to stop there, but with the sun this bright it’s hard to hide anything. “Yeah. I’ll miss you too.”

He pounds my back and backs up, tries to whistle for the kick. I roll the imaginary ball and he strikes it and we both watch it sail through the net.

Gregory grins and points to me for the assist, and then he finally leans over and throws up.