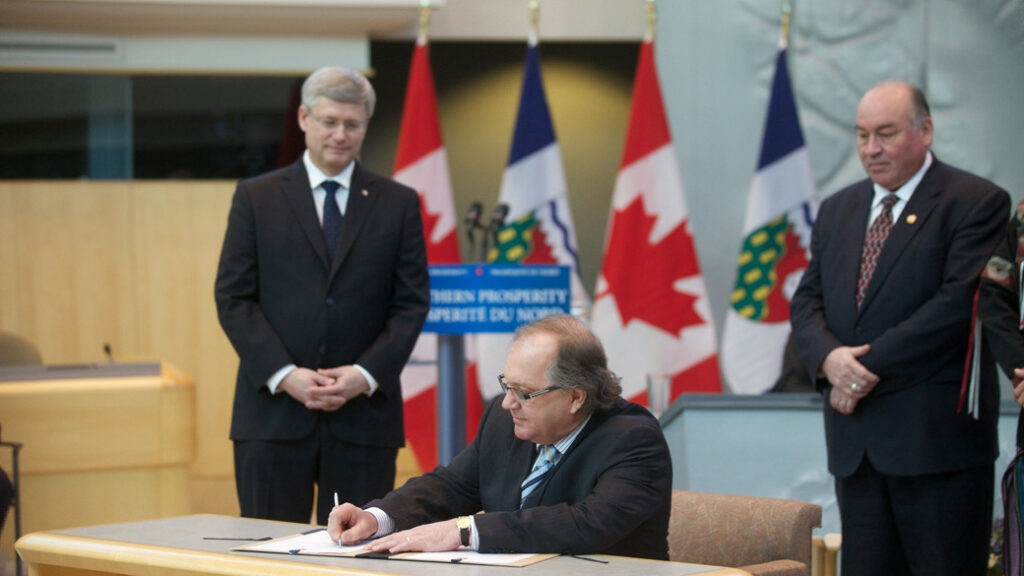 The first post-devolution resource dollars are in and the numbers are, well, pretty disappointing.

By the end of 2014/15, the GNWT expects to have collected $63.7 million in mineral, oil and gas, and water revenues ($50.4 million has been collected so far, plus $13.4 million in estimated accruals to be collected in the last three months of the calendar year). That’s considerably lower than the $83 million forecasted during the budget session in February, and a whopping letdown compared to the $120 million GNWT folks were hoping for in February of 2014.

After sharing 50 percent of revenues with the federal government and 25 percent of the remaining amount with aboriginal governments, as per the devolution agreement, the GNWT will be left with only $23.9 million. Of that, around $6 million will go towards the newly established Heritage Fund, and the remainder will be put into “strategic infrastructure” and debt repayment.

“For the 2014/15 budget, because we didn’t have any numbers and we weren’t able to get any kind of information from the federal government, because of course it was still confidential until their agreements were actually transferred over, we forecasted a five-year rolling average, which was $120 million,” said Kelly Bluck, Director of Fiscal Policy with the Department of Finance at a media briefing on Thursday. “Things have tanked since then.” The briefing was the first public airing of the numbers, which have yet to be tabled in the legislative assembly.

The chief culprit seems to have been the diamond sector. Royalties are based on revenues, which, naturally are based on the quantity and quality of diamonds being produced by NWT mines. Global prices are “extremely volatile,” said Bluck. “If you look at the five-year average, had we had the one extra year of the five-year average, we would have dropped [the estimate] down to $100 million, just like that.”

To be fair to the GNWT and their (retrospectively-seen) inflation of the numbers, back in 2014, Finance Minister Michael Miltenberger warned that resource revenues are “extremely volatile in that the expected revenue stream could fluctuate by as much $30 million from the expected annual average.” While that fluctuation turned out to be closer to $60 million, the GNWT did decide, wisely it now seems, to “not include resource revenues in our operations and maintenance budget to fund programs and services.”

What to make of the numbers?

There will likely be those who will look at the numbers and point fingers at the GNWT for not having set high enough royalty rates – we did after all adopt the royalties regime from the feds without tweaking it to fit our priorities. But as Woodward pointed out, along with royalties, the mines pay the majority of the corporate taxes collected by the GNWT –  “Probably 80 percent is resource companies paying” – and, she added, “When you look at property tax we collect as the GNWT… 80 percent of that is the mines. That’s something in other jurisdictions you wouldn’t have.”

“It’s a complicated assessment, because we also know there’s quite a bit of competition within and between countries around that balance between your resource revenue rates and activity.”

Still, there may yet be a review of royalty rates called by the next assembly. Though realistically, a slight increase in rates won’t change the major factors affecting revenues: commodity prices, industrial output and private sector investment in the mining sector.

The big, and somewhat disheartening, takeaway from these numbers, is that no matter how much we aspired to a provincial-like autonomy with devolution, when it comes to financing the GNWT’s billion dollar budgets, we’re still going to be knocking at Ottawa’s door for the foreseeable future.

“We know how much the resource companies are paying, and it’s a fair share, but when it comes to the real revenues it’s all about formula financing,” said Bluck. “Devolution is not going to make us a have province.”