A Russian defector taught us Grade 9 science in Yellowknife Public School. He was a PhD, so we called him the Doctor. It was 1969, the height of the Cold War, and the town embraced him with gusto. By the first months of school he was just settling in, making the rounds of obligatory dinners with his students’ families. He was a shy, modest man who probably found these social obligations excruciating, but he was too polite to say no, so off he went to make small talk and eat food foreign to him when he would probably rather be home working on his research or reading books.

I think he felt more comfortable with his teaching colleagues, who were very protective of him. The music teacher reconciled his attendance for him every month. “I think he’s just too intelligent and theoretical to figure it out,” she said, waving her cigarette. The French teacher gave our defector tips on how to deal with the principal. “This isn’t a police state,” I overheard him tell the Doctor. “Tell him to screw off.”

So things seemed settled – dinners out, and the support and wisdom of his colleagues, until one day two large men with Russian accents walked into Sir John Franklin High School and demanded to speak to our defector.

“Come into my office,” the principal said. He looked meaningfully at his secretary as he walked past her desk. The minute the door to his office closed, the secretary ran to the pay phone outside the front door and called Yellowknife Public School. “Get the Doctor out of there,” she said. “The KGB is after him.”

Meanwhile, in our Grade 9 Science class, the Doctor was halfway through a lesson. Our principal stood suddenly in the doorway and in a loud voice called him over. We were shocked. Principals never interrupted lessons rudely. Our French teacher, for example was always accorded the greatest deference.

The principal whispered in the Doctor’s ear. Our defector’s knees gave way under him.  “They’re going to kill me,” he said.

The principal held him up by one arm. “They’re not going to find you,” he said fiercely, then half-supporting him, dragged him in the direction of the office.

We sat stunned in our seats. A moment later the school secretary ran into the classroom and pulled down all the blinds on the windows facing the street. Then she turned to the class and screamed, “Nobody move. Don’t get out of your desks,” and ran out of the classroom as quickly as she’d entered it. A pause, then two boys got up to peek through the blinds. “They’re taking him across the street to the vice-principal’s house,” one of them said.

Meanwhile, across town, the principal of Sir John Franklin High School had managed to convince the Russians our defector was teaching at the Catholic school. At St. Pat’s a student spilled the beans that our defector was really at Yellowknife Public School, so the next thing we knew, just after the bell rang, there were two large Russians standing outside the front door handing out chocolate bars to the children and asking where was the Doctor.

Everyone knew where the Doctor was hiding, of course, because someone from every classroom along the street wall had peeked, but nobody told. I know because I was there, advising children to take the chocolate but not say anything. I didn’t know what else to do, and when I spotted the vice-principal’s son, I yelled at him to get his father because the Russians were here. One of the Russians reared himself up glaring at me as if he killed children for fun, and I said, “Whaddaya gonna do – hit me? I’m 14 years old. I bet the RCMP wouldn’t like it.” At the word ‘RCMP’ he deflated back to normal size and tried to sound friendly.

Then the principal appeared and started yelling at them that he didn’t know where the Doctor was and they should leave immediately because he’d called the police, so they went away.

They hung around town for days, questioning people and getting nowhere.

My father walked to the school and leaned over the counter to talk to the principal. “We have a comfortable basement too, if you need to move him,” he said.

“I don’t know what you mean,” the principal said, but his eyes darted sideways.  “Somebody broke into the school office last night,” he added.  “We may be bugged.”

Do you know who chased the Russians out of town? The service people. Waitresses in the local bars refused to serve them vodka – even the Strange Range where management was not known to be particular about the conduct of their customers. They couldn’t get hot food in restaurants. The groceteria manager of the Hudson Bay wouldn’t sell them anything but white bread and bologna, and he stood right there at the till while Cosomina, the head cashier, rang up their groceries to make sure they didn’t get to buy anything good like his three-month-old eggs or instant coffee which in 1969 was truly dreadful stuff. While Cosomina punched in the prices and bagged their bologna and bread, the manager bawled out the Russians for having previously bought candy with which to bribe the innocent children of Yellowknife, who had robbed them of their stock of chocolate bars without divulging any information whatsoever. A group approached the manager of the Yellowknife Inn and demanded he throw the Russians out of their hotel room and into the snow, but to everyone’s dismay he refused. “I can’t do that,” he said. “It’s 40 below out there. They’ll freeze to death.” So we had to be content with the Russians eating bologna sandwiches in their hotel room and wandering through town asking people where the Doctor was, until the RCMP quietly asked them to leave. Canadians are so polite.

Then our defector came out of his hiding place in the vice-principal’s basement and we were relieved to get him back.

Who were the Russians? Some said they were friends from his village with a message from his family. Some said they were KGB. This I do know. While I was talking to my large Russian, I told him. “We’re not trying to be rude. We’d do the same for you if you wanted to defect,” and he stared and stared at me, until his partner began to scream at him in Russian. It was then he said, “I’m doing my job. Tell your parents.” His face was a little sad.  I was young enough to feel sorry for him.

To order any of Catherine Dook’s humour books, contact her at catherinedook@hotmail.com. 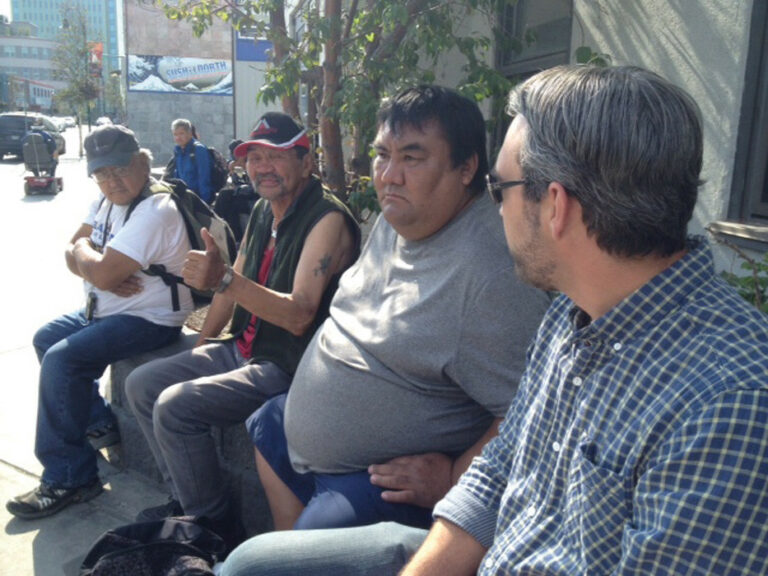 Saturday at the post office with Joe, James and Mayor Mark