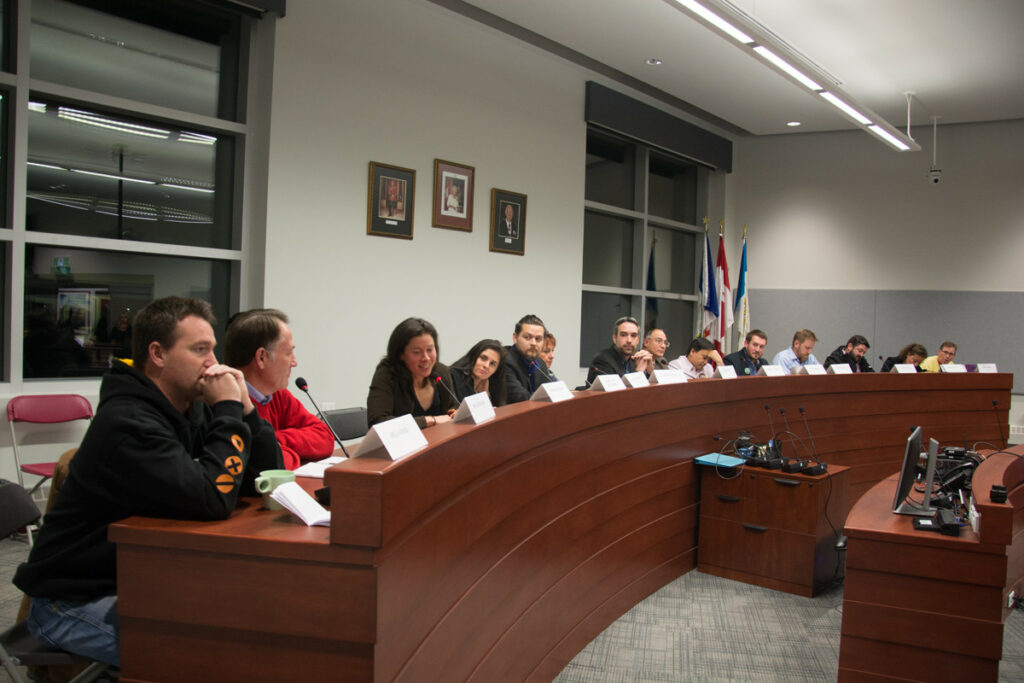 If anyone ever makes a movie about the founding of IserveU, the scene at City Hall Wednesday night would surely be the climax. Monday night – when we learn if any of their candidates actually make it onto council – can only be the denouement.

The spectacle came near the end of the two-hour Alternatives North forum, held in council chambers. Following a number of questions directed to the IserveU candidates, the moderator dropped the rules of engagement and allowed each non-IserveU candidate to offer their two cents on the system. The result was something of a skewering, as speaker after speaker explained their opposition to the system.

“Why get married if you know you’re going to get divorced a year later?” asked Phil Moon Son. “Why sign the contract where you know within a year there’s going to be an issue that the majority of people will be strongly against but you deep inside can’t agree with, can’t vote for it?”

“This is such a small community,” said Niels Konge. “People are giving their input all the time and we are so so accessible. If people don’t think I’m accessible, go to the grocery store at like nine o’clock at night!”

The IserveU candidates, who’d been given plenty of speaking time when responding to earlier questions, had to sit back as their arguments were hit from all sides: If you are so keen on the system, why didn’t you bring it in through City administration rather than forcing it as an election issue? How can the online system cope with the realities of the council chamber where motions are often amended on the fly? How can we be sure the people voting are informed about the issues?

When Steve Payne chimed in, “These are really good people, and I can see what they’re trying to do. It’s hard to see them get beat up,” you had to feel a twinge of sympathy for the IserveU candidates, as well as a touch of indignation that the moderator had let the forum devolve into a doggy-pile.

But here it was: the pent-up questions, legitimate concerns and straight-up dislike that have dogged IserveU’s intriguing foray into municipal politics had hit prime time.

I’ve been following IserveU from the get-go. Back in January, I sat in on one of the group’s inaugural meetings to write a story about project’s launch. It seemed quixotic then – a bold if hazy idea bolstered by a certain understanding of political history and some nifty coding. The serving councillors, mayor and academics I spoke with about the project expressed doubts that it could work. But then again, I knew the core members of the group to be intelligent and driven people, and Paige Saunders*, the group’s leader who’d made a chunk of money in property development, to have deep pockets. As he told me then, the project would likely cost about $100,000 but he was willing to open his wallet to make it a reality.

I’m still unsure what could drive someone in their late 20s to invest that kind of cash in an e-democracy movement: A desire to be seen as the Steve Jobs of democracy? A passion for direct democracy underpinned by philosophical assumptions about the value of human action in the public square? Perhaps it’s a genuine feeling that our political system is faltering and needs a shot of adrenalin; perhaps it’s a futurist’s passion for all things shiny and new.

Whatever it is, it was clear from the beginning it wasn’t a money making scheme: the team decided to make the whole system open source, making it impossible to beta-test on Yellowknifers then sell to some Bay Area tech company. Building on this promise, the IserveU crew began attracting young, tech-savvy idealists from Yellowknife and across the country to come work or volunteer for the movement.

When things kicked into high gear at the end of August, I tagged along for an evening of door knocking. By then, what had started as a group of friends whose idea of good marketing was footage of Dane Mason chopping wood while wearing plaid and talking about the system, had turned into a slick political machine with fancy advertising, a huge cadre of committed volunteers, and a state-of-the-art campaign management system.

The system had also changed significantly. They had begun to develop a deferred voting system so uncast votes would be transferred to the IserveU councillors, effectively giving them free rein to vote their conscience, except in the unlikely circumstance where the majority of votes were cast on a given issue. It changed again in the subsequent month: councillors would no longer have to sign a legally binding contract to ensure they’d vote with the IserveU system; instead they’d sign a pledge, changing the relationship between the councillors and system from a legal to a moral one. This seemed to be an attempt to head off the possibility of a legal challenge, as it’s unclear if any elected official in Canada can sign away their votes. With each iteration, the system evolved away from “robot candidates” towards the kind of information-gathering tool that they’re currently pitching it as.

Finally came the candidate announcements: Rommel Silverio, Marie-Soleil Lacoursiere and Mason, who had shifted from communications guy to candidate. It wasn’t the five candidates they’d been hoping to field, but it was something.

Since announcing their run, the IserveU candidates, while not shying away from talking about the system, haven’t made it the touchstone of their public profiles during debates or media interviews. During last Friday’s Chamber of Commerce forum, IserveU was mentioned only once, though the candidates made several references to improving public engagement. Their reason for this, which seems to be a fair argument, is that most of the time they’ll be voting their conscience, so Yellowknifers deserve to know their stance on things.

This changed Wednesday night following a series of questions from the audience about the transparency, accountability and effectiveness of the system. All of sudden, the night, which had been a routine recitation of digestible sound bites, was all about IserveU.

“Your starting assumption is that this system would make municipal politics way less inclusive than they are right now, but I would have to strongly disagree,” said Lacoursiere, responding to a pointed question. “To have all kinds of people I would never know get in touch with me, share their comments, see what I will vote before I do, and see the level of preparation I have, see what arguments I’ve considered and be able to engage with me – I see it as such a tremendous improvement from the current system.”

Silverio came at it from the angle that minority groups – which “have never been contacted for municipal things that they want to be part of” – would have more say in city council using IserveU. “Speaking of the Filipino community, English is kind of a barrier to us, because it’s a second language… so with this forum they’re able to put down their thoughts.”

All three candidates painted the system primarily as an outreach tool and a way to crowdsource innovative ideas.

Then came the blowback. Rebecca Alty pointed out the online voting system would slow council’s decision-making process; if a motion was amended or broken into parts, she argued, “it could really create a lot of red tape because then it would have to go back out to vote.”

Adrian Bell put it even more bluntly: “I hate walking into a meeting where other people across the table walk into that meeting unprepared, they haven’t done the readings, they don’t understand the context. And this is the problem. I don’t know who’s at the other end of that terminal. Who’s voting?”

I think we can all agree that IserveU could have avoided a lot of headaches had they publically tested their system before making it an election issue. And Saunders and IserveU’s inner circle would have won far more friends had they been less confrontational and single-minded on social media. But practicalities and etiquette aside for a moment, the most crucial point about IserveU was made by Mark Heyck.

“My fundamental question about IserveU is, what problem are we trying to solve?… To me the City has done a very good job using new technologies and the internet to reach out to that broader community, to get that feedback, to put out surveys and questionnaires and present that information in an unbiased way so that council ultimately is well positioned and well informed to make the proper decision.”

Perhaps because I know the people involved and have seen the campaign roll out over the past nine months, I’m confident this isn’t some sort of nefarious plan concocted by strange men with foreign accents and shady connections to local media (We’ve been hearing that a lot lately over here at EDGE). But I still wonder why it’s happening.

Usually democratic revolutions follow from grievances. And while their advertising tries to contextualize the current campaign within a series of historic wrongs – denying women, Asian-Canadians and Aboriginal people the right to vote, for example – can we really say Yellowknifers’ inability to vote directly on all municipal issues is an injustice?

None of this is to say IserveU won’t work, nor that people shouldn’t give it a shot. I personally am not a fan of the project, for reasons best captured in Stephanie Irlbacher-Fox’s piece for the Journal of Northern Public Affairs. But the team has fielded three candidates who could hold their own on council with or without IserveU (even if they’re engaging in populist no-tax increase bluster). And with only three people running and the possibility of a legal challenge minimized by scrapping the contract requirement, there’s really not a lot of risk involved. A number of the non-IserveU candidates even admitted that it could be an effective way to gather public input if the operational wrinkles are ironed out.

“I really think the devil will be in the details,” said Bell. “If there are 5000 members on this platform and if they’re regularly engaged, that’s going to be an incredible enhancement [to our ability to consult citizens]. If there are 300 of them, then I think the candidates who are running on that platform should have the right to say I don’t think that number is providing me the moral authority to follow this vote.”

After the final comment was made and the applause died down, Niels Konge leaned into the microphone: “Thanks for coming out, everybody. This is the first time in three years that this room has been this full.”

It’s not clear how many of those people were there because of IserveU, but I think it’s fair to say more people are talking about municipal politics than before because of their campaign. And this may be the ultimate benefit of this whole endeavour. It’s got people talking energetically about how our political system works, what role council plays, and how reasoned deliberation measures against popular opinion.

Perhaps it’s eaten up too much of the political discourse this election: as one witty commentator tweeted, “IserveU is the Niqab Debate of #Yellowknife.” But ultimately these discussions are the stuff healthy democracies are made of. And who knows? Maybe come Monday we’ll get to watch this thing try to run its course, for better or for worse.

* Full disclosure: Paige Saunders is a partner in Verge Communications, which owns EDGE, and EDGE publisher Brent Reaney is a communications advisor to the project. However, EDGE’s editorial department retains complete independence in its coverage. 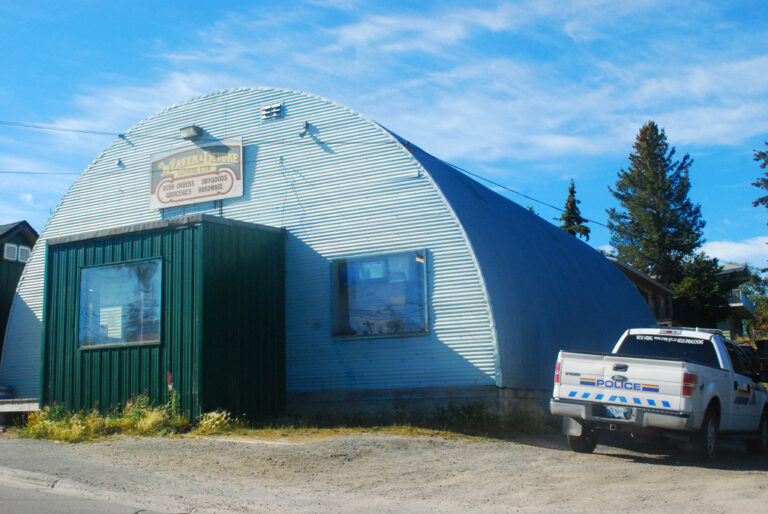 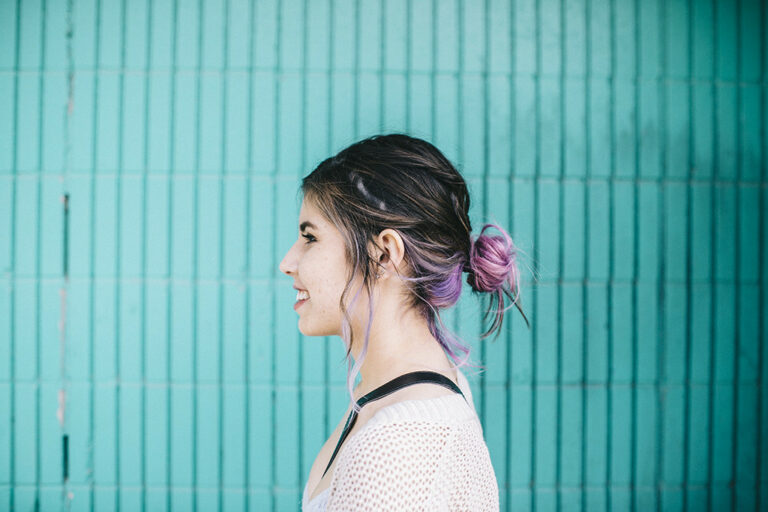