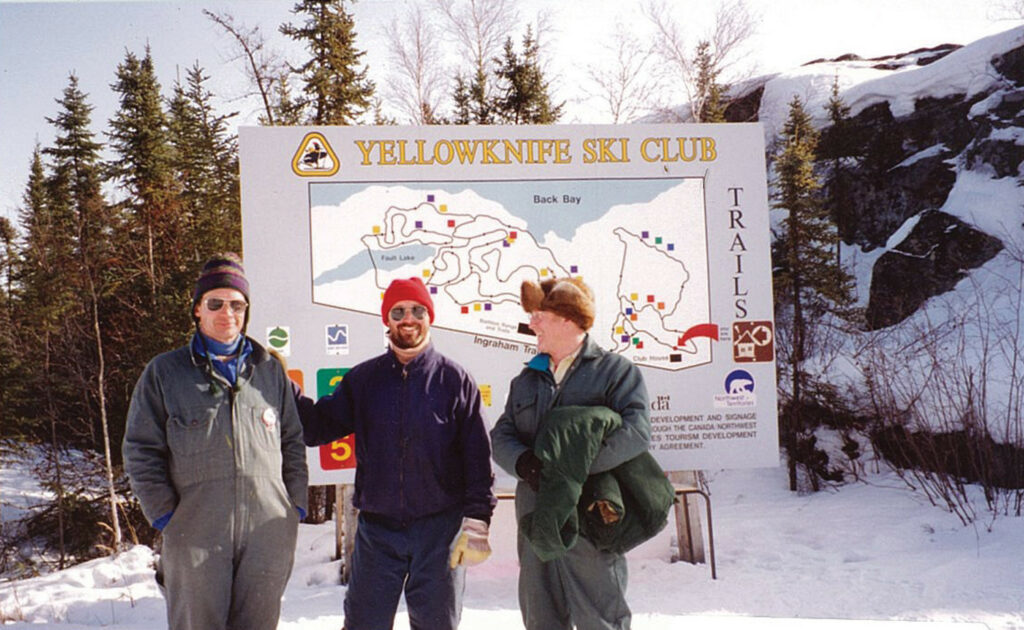 Western Canadian Championships, 1993: David Gilday at left, John Stephenson and John Argue in front of the old trail map. The location of the old clubhouse is marked in the lower right hand corner. Today, the Kids Corner Childcare Centre on Haener Drive sits on the spot.

In Yellowknife, like anywhere, community groups tend to come and go based on the changing needs and interests of the volunteering public. But every so often a group with real staying power comes along. The Yellowknife Ski Club is one such organization. For more than 40 years, the club has introduced hundreds of people to the sport of cross-country skiing and instilled a deep sense of community in those who ski its trails.

Perhaps it is the nature of the sport itself that fosters such commitment to the club. Cross-country skiing is not easy. Just staying upright requires living in the moment, always striving for that perfect balance between power and grace. It takes endurance and dedication to propel oneself forward on skis, or run a successful organization; and volunteers at the Ski Club have got plenty of both.

Stephen Dunbar is one such volunteer. His parents Linda and Blair became heavily involved with the club in 1977. The young Dunbar literally grew up on the trails, so he comes by this sense of dedication honestly.

“So many of the volunteers are personally invested in the club, either having children in programs, or by having grown up in one of the club’s many programs,” Dunbar says. “The club has benefited from dedicated volunteers who mentor the next generation of leaders.” Now the last member of his family living in Yellowknife, Dunbar can still be found coaching at the club at least three times a week.

It Was All Down Hill from the Start….

For those familiar with the topography of our city, the Yellowknife Ski Club started in a most unexpected way — as a downhill club. In 1960s Yellowknife, a group of mountain-sick friends got together and took over the best (if the only) ski-able hills around town. Jetmund Bendiksen, a high school teacher who, along with his wife Pat, had come to Yellowknife from Norway, was instrumental in starting the club. Bob Spence, an employee at Giant Mine, was also a founding member. Later they were joined by another high school teacher, Bert Mockford, and before long, the club had collected a devoted following.

They bombed down the hill by the Jackfish Lake Power Plant — known to pretty much anyone who grew up here as the “Jackfish Lake Sliding Hill” — and the ravine on the edge of the existing cross-country ski club trails just down the highway across from the plant. In fact, “Old Tow Hill” at the club takes its name from the old towrope that used to ferry the downhill skiers back to the top there.

By the late 1960s, the downhill-focused group transitioned to cross-country skiing and the Yellowknife Ski Club as we know it now was born. The trails were moved from Jackfish Lake to where the Niven Lake Subdivision is today. The first major event hosted by the Ski Club was the Arctic Winter Games in 1970, then again in 1984. This marked a new chapter by giving the club’s skiers exposure in the circumpolar world and establishing Yellowknife as a destination for competitive ski events.

From Jackrabbits to High Performance Racing – Programming for Everyone

There was a serendipitous influx of people who moved from Inuvik to Yellowknife in the mid 1970s. These new members were involved in the Inuvik’s highly successful cross-country program, which turned out world-champion skiers Sharon and Shirley Firth. Linda and Blair Dunbar were two of these new additions and they immediately directed their energies into helping build competitive programs here. The early 1980s saw the club move from being a place for social skiing to a more program-based Nordic centre, offering everything from beginner lessons to high performance racing.

The High Performance Racing program for kids over 13 is one of the club’s longest running. A sure sign of the dedication and commitment to turning out high-achieving skiers is the fact there have been only five lead coaches since the early 1970s — Jetmund Bendiksen, Peter Hart, Dave Sutherland, Linda Dunbar and today’s coach, Corey McLachlan. Generations of accomplished racers got their start on the Yellowknife trails, including three-time Olympic biathlete Robin Clegg, Mike Argue, Olympic biathlete Mary Beth Miller (who died tragically in 2000 from a bear attack while training outside of Quebec City) and Thomsen D’Hont.

Aside from turning out world champions, the club has always offered recreational programs for both kids and adults. Jackrabbits is the longest-running program, offering weekly lessons to kids as young as four. There are also adult lessons, a women’s ski night and a youth biathlon program. The Skiing Parents group gives parents with little ones a chance to ski while others take turns looking after kids in the chalet.

The Trails Then and Now

The chalet wasn’t always the spacious, windowed gathering spot it is today. By the 1990s, the growing membership had outgrown the small Atco trailer it used as a clubhouse (imagine the smell of 70 sweaty kids and gear on a winter afternoon). After years of fundraising and sweat equity, a new clubhouse was built and shared with the Cadets to offset costs. The building opened in its current location in 1997.

With the expansion of the Niven Lake residential area, the Ski Club trails had to be relocated to the current site on the other side of the ravine. Linda Dunbar recalls the challenge of convincing the City of the value of having a major recreational ski facility within city limits. Initially, proposals spanned locations all over the area.

“Other locations suggested were the Yellowknife Golf Club,” she remembers, “the dump, and somewhere around the Yellowknife River.” In the end, the club shifted to the opposite side of the ravine where it still sits on the edge of Yellowknife Bay. Old Tow Hill marks the edge of the old site and the new.

The current site features about 14 kilometres of groomed trails, including a mix of easy loops, challenging hills and everything in between. The quality of the carefully manicured trails is by far the biggest reason to ski the club rather than a lake or an unofficial trail. The groomers, affectionately referred to as ‘snow farmers,’ are a dedicated group of volunteers who set and groom the trails three times a week all winter, no matter what the weather. It’s no small task and the farmers can often be seen out there as late as 11 p.m. preparing the surface of the snow, depending on conditions, then setting tracks on each trail. Walking, snowmobiling and dogs are strictly prohibited on groomed trails, lest they mess up the carefully set tracks.

Les Clegg, John Stephenson and Rob Tumchewics have all been devoted snow farmers in the past, while Brian Latham organizes work crews each fall to clear brush.

Since its incorporation as a society almost 45 years ago, the Yellowknife Ski Club continues to grow stronger and more vibrant. The Club is still 100 per cent volunteer-run and can boast a level of stability and commitment that is rare, even in organizations with paid staff. As for the club’s ability to thrive for another four decades, current president Tim Mercer is optimistic.

“The history of the Yellowknife Ski Club is the story of incredible community spirit and volunteerism,” Mercer says. “Our membership stands on the shoulders of the giants that came before us.” And that membership continues to grow. In the 2011-2012 season, the Club reached a record number of 566 members.

Paul Clyne, for example, was new to town when he joined the Ski Club with a friend. Having moved from Ireland to Canada, Clyne had never skied before last fall. He threw himself into the sport, training for, and completing, the Frostbite 45 — a grueling 45-kilometre trek that begins and ends at the club — in March. This distance is no small feat for any skier, let alone a beginner. It was during that race that the spirit of Yellowknife’s ski community really resonated with him, inspiring him to become a volunteer. Before the snow fell this year, Clyne was spending weekends at the club helping clear brush on the trails.

“It was amazing to me that people can commit so much time to make something so big run,” Clyne says, “and after seeing that, I’d like to help a lot more this year.” AWG Opening Ceremonies, 1990: These were a games of firsts for the club. The Biathalon program was established and a shooting range built in anticipation of the games. The same range is used today. It was also the first time Greenland competed at the games. A family club: Ann Berube and her sons with Fran Ramsden and daughter (Olympic cyclist) Denise. At 45 years old, hundreds of kids have learned to ski alongside their parents at the Yellowknife Ski Club.

For information about lessons for both adults and kids, and how to become involved with the Yellowknife Ski Club, visit skiyellowknife.com

Overlander Sports offers boots, bindings, skis and poles as well as all the clothing you need to be comfortable on the trails. Beginners can expect to spend $350 for a basic ski package.If you’re on a budget or not ready to commit to new gear, you can scope out second-hand options through Head Gear, yktrader.com, or the newspaper classifieds.Each November, the Ski Club hosts a Snow Show at the chalet. This annual grand opening of the season celebration includes a second-hand gear sale. Get there early to find some great deals.

Can’t Get to the Club? Where Else to Ski…

The joy of being surrounded by all this open space is that it’s easy to get out to ski from almost every corner of the city once enough snow falls. Check the City of Yellowknife website or Tourism NWT for trail maps and ideas of where to explore. Or, when the ice is safe (only according to the Yellowknife Fire Department), head out on Great Slave Lake to enjoy endless hours of flat terrain. Just remember that anywhere you go outside of the Ski Club you will be sharing the trail with vehicles, dog-sled teams, snowmobilers and other skiers. Make sure to stay visible and share the trail.

Life with Dogs – Where to Ski with Your Furry Sidekicks

Since pooches are off-limits at the Club because of the groomed trails, here are some spots for people with puppies:

1. Tin Can Hill – dogs can be off-leash while you amble around the trails. This is still City property, so please pick up after your pooches.

2. Great Slave Lake – be careful around snow machines and the ice road if your dogs are off-leash. Quiet corners of the lake are a great place to learn how to skijor (where your dog pulls you while you are on skis).3. Vee Lake Trail – off Vee Lake Road on the Ingraham Trail. A few hills but lots of space for your dog to run through the bushes while you ski. 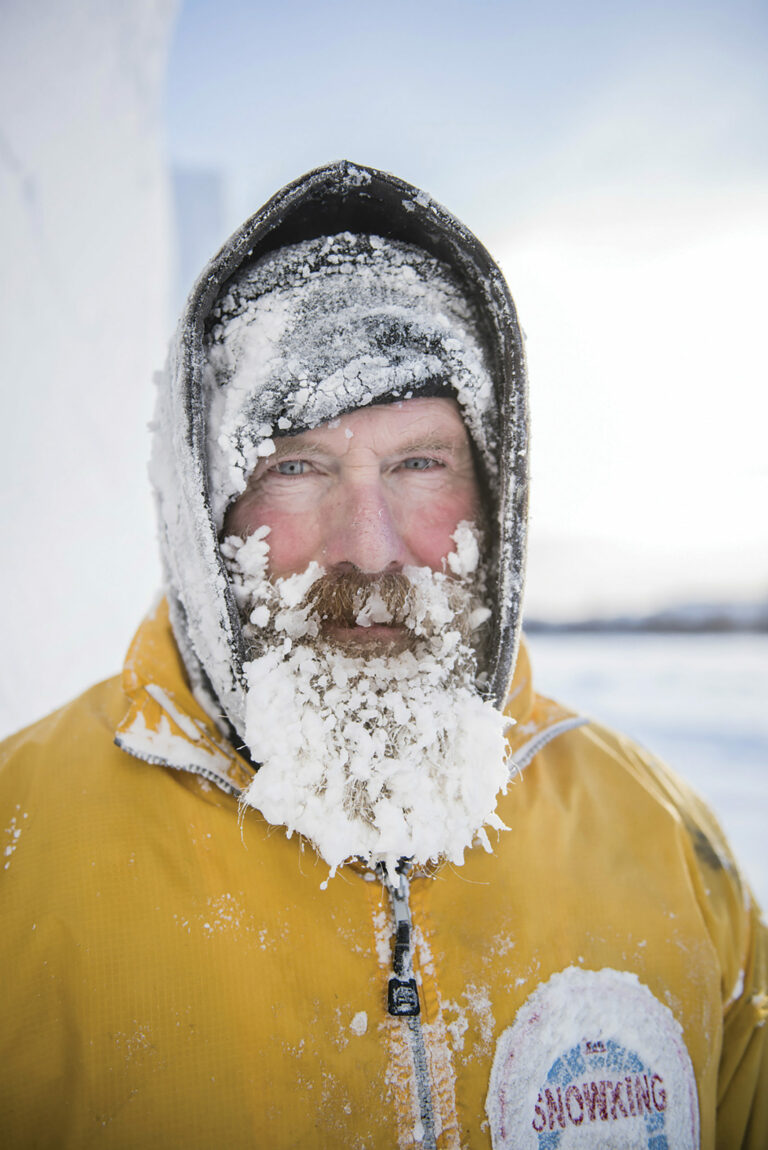