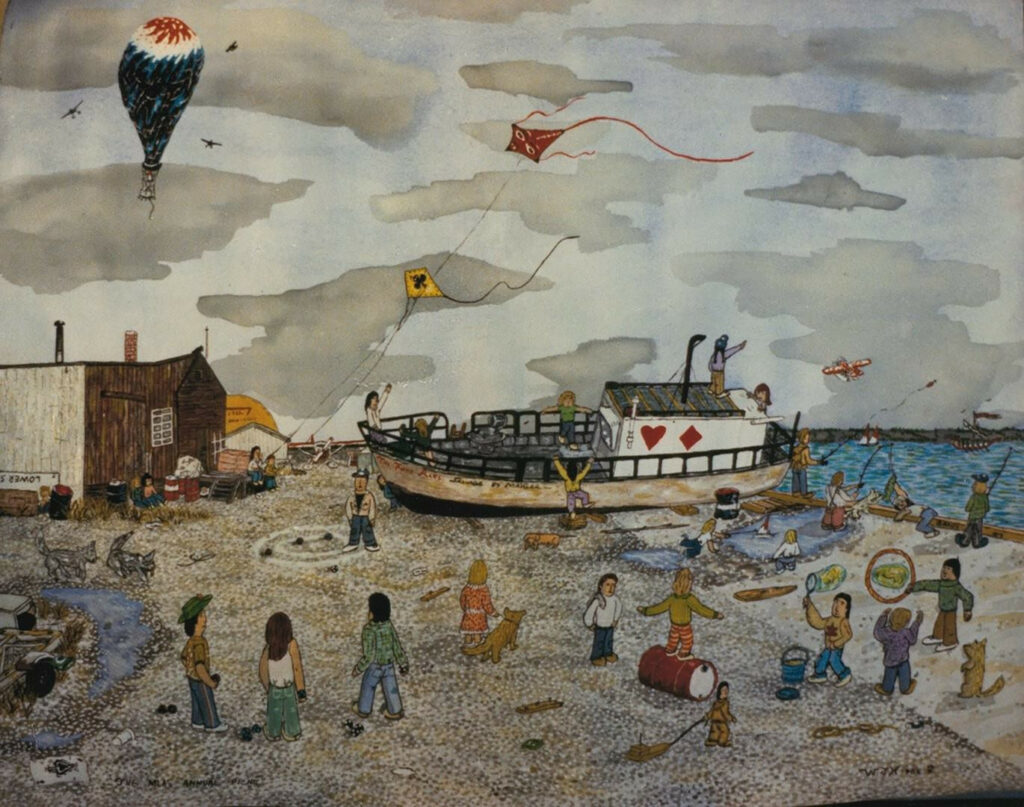 The MLAs at Play

Kids balance on barrels, fish from the wharf, toss bocce balls; an old fishing boat rests on wooden planks; above the action, kites and planes and imaginary air balloons soar. Here’s government dock in the 1980s, vivid, alive and painted in an earthy style a little like a Northern Bruegel. To be sure, photos buried in the NWT Archives over at the Prince of Wales Northern Heritage Centre capture Yellowknife’s past in a much more accurate manner. But if you want to know what Yellowknife felt like, spend some time with Walt Humphries’ paintings.

This is easier than ever now, with the launch this week of a vast online archive showing hundreds of Humphries’ paintings.

“There were a couple of galleries back then,” Humphries tells EDGE, remembering his painting heyday in the 1980s. “They wouldn’t touch anything like this. They’d just look at you like you were crazy. I remember the one guy says, ‘we want pretty art or log cabin art.’

“But I wanted to paint the things nobody up here was painting: what you see. The real Yellowknife. I have nothing against pretty pictures. I mean they’re fine, but that’s it, they’re pretty pictures. I like paintings that deal with the reality of what you’re living and seeing and doing. A lot of them I knew wouldn’t sell, but that’s beside the point. They’ll be interesting some day, because they’re history.”

Here are some of our favourites, with commentary from Walt himself.

The MLAs at Play (see above)

I’m not sure who it was, it might have been Dave Smith or one of the guys who recovered some balls from an old ball mill, and they had a pile of them down there, and the kids started playing with them like you would with bocce.  It wasn’t like today where kids get ferried from place to place. Kids just played wherever they were, so you’d often see kids down there playing at the dock. We only had canned TV, and it was CBC and they’d put on operas and godawful stuff to watch anyway.

Now the boat, it was called the Four Aces, an old fishing boat. Did you ever hear of Ted Mailer? Ted Mailer was a bit of a character, and he found that boat. It had started to sink and the guys had tied it up to shore. Mailer thought he could salvage it and claim salvage rights, so he grabbed the boat and brought it into town. They actually had a little court case about it — the boat hadn’t been abandoned, even though the pump had stopped running —  so they ended up getting the boat back, and he got a bit of money for hauling it into town. I got a kick out of that because that case lasted a few years. It was a much smaller town then, so when things happened downtown, everybody used to go downtown.There was no home delivery or site boxes, so everybody had a postal box, anybody wanted to check their mail, you went to the post office, so it was the focal centre of town. It’s the same building today, they’ve just changed it and fixed it up. I made it look like a stamp because it’s the post office. Oddly enough, Canada Post never approached me. It was built just when the bunk houses at the mines were closing down. So the guys from the bunk houses were supposed to move here. The guys started putting up flags and stuff in the windows, you know what guys are like. Lots of parties, with guys hanging out the windows and shouting. And the picture of the TV going out the window did happen; one guy got fed up with the other guy’s TV and just threw it out. There was another guy who tried to repel down. Somehow they had access to the top of the building which was a bad idea! It lasted three or four years before they got kicked out or moved out. Now some people were absolutely horrified by this painting. But the woman who bought it had run the place in that period, she couldn’t stop laughing, she says ‘that’s exactly what it was like! We were afraid they’d destroy the building before we got them out.” I went down here, and these kids were out there playing with the plane, so I asked them, ‘where’d you get that from?’ And they said, ‘Weavers,’ so I went over there and bought a couple, they looked like so much fun. You twisted the propellor around and around and around, it wound up this little rubber band, then when you let the propellor go, away this little balsa wood plane would fly. With mine, I lost one in the lake.

She was a real person, I have no idea what her real name was, I just always knew her as the Caribou Queen. We all have our own little peculiarities, but her thing was dressing up, always the best-dressed person in the bar, and she’d always make these grand entrances, where she’d just come in — she was a good looking woman too: Here comes the Caribou Queen! Then she’d go to the Trapline across the street. This was her thing, to walk in, make a hell of a great impression. She probably never bought a drink in her life. This is the mainland going to Latham, years ago before it was all built up, where the water taxi used to go. And I put a guy living in the bank here, because 100 Percent Joe used to live out at the airport, in a dug out on the side of the banks — they used to call them dugouts where you’d dig out a hole and build your log cabin in it, so you’d be using the ground as insulation. He was a prospector and he’s built out there on Long Lake, and his name was 100 Percent Joe, because he was always saying ‘100 percent!’ When the airport and that road got busier he was sure the Con Mine guys were out there mining his claim. When he passed away, the City ran out there and tore his place down because they didn’t want anyone else moving into it. John Munro [the Minister of IANAC under Pierre Trudeau] was coming up to make some announcement and the union found out, so they wanted to picket him. Somebody said, ‘Oh, the meeting is at Bellanca Building,’ so they all went over to the Bellanca Building with their signs and everything else, going back and forth. Somebody else says, ‘Hey he’s not here!’ And someone started a rumour he was over at the Explorer, so all these picketers run up to the Explorer hotel to start picketing there. And the guy in the Explorer comes out, ‘He’s not here either! Maybe he’s down at the Yellowknife Inn.’ So they all rush down to the Yellowknife Inn. So you have this little group of picketers, maybe 10,12 of them, running from building to building trying to find where he is. It was all completely harmless, it was just so funny seeing this little convoy of picketers running from building to building: ‘He’s got to be here somewhere!’ Return of the Dinosaurs

I get bored easy, it’s one of the problems. I was doing the background to it, and I don’t like just doing houses. But I like the idea that, with land claims and everything else, it depends how far back you actually go. There literally were dinosaurs in Yellowknife way back when. So maybe there are some eggs buried in the lake that suddenly hatch. They have found some dinosaur tracks up here. People forget we had these different animals over the course of time, so who knows, they might make a comeback yet. For some reason, known only to the guys who put in Northlands, the water line came in at the back, and ran all the way underneath your trailer to where your kitchen was. Why would you try to have a 40 foot waterline you had to heat and try to keep from freezing? But the plumbers were always coming out there, and when they talk about a crawl space, to get underneath the trailers, that was literally a crawl space. He’s crawled in to try to fix something, and the other guy’s got a torch going. Every once in awhile they’d set a trailer on fire. Last Stand at the Boat Launch

That’s the original boat launch at Vee Lake. I’ve got claims up there. When I started going up there there was only three or four places on Walsh and Banting Lake, so you’d often be the only vehicle in the parking lot and you really did feel like you were out in the middle of nowhere.