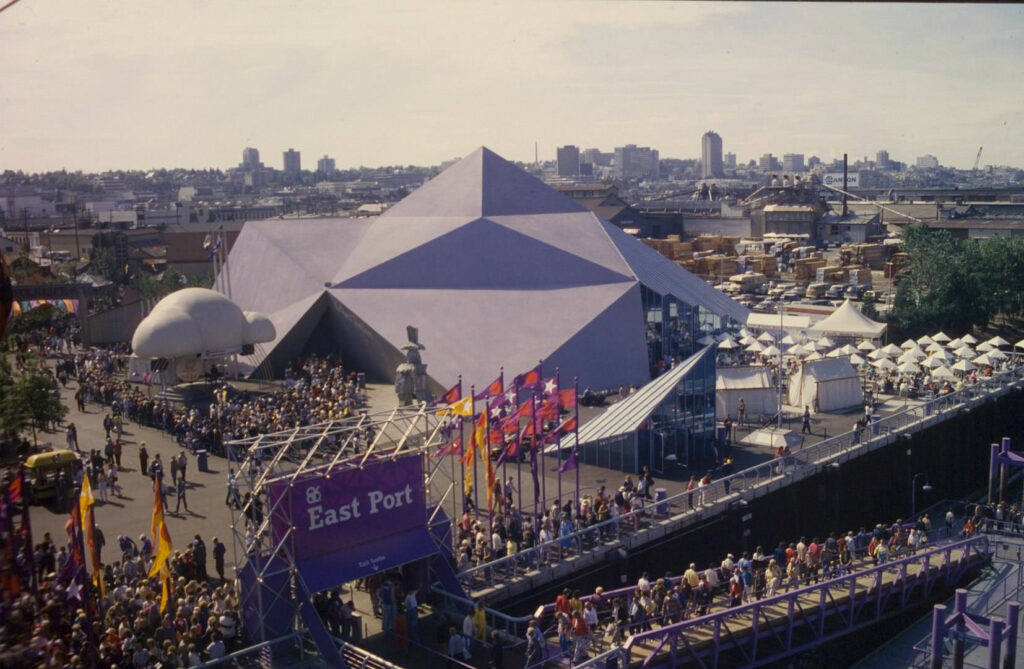 Thirty years ago, Vancouver invited the world to its party… and the world came. The occasion was Vancouver’s 100th birthday. The party was the World Exposition on Transportation and Communications, known as Expo 86.

Over 22 million visitors came to the celebration, and about 1.5 million of them were lured into a building designed to look like an iceberg. The Northwest Territories Pavilion.

While international exhibits representing 54 countries were housed in generic buildings, Canada and its provinces and territories had specifically designed pavilions to show off to the world. Bing Thom Architects’ $2.8 million iceberg, with a coating of glass granules that shimmered in the sunlight, was one of the most innovative and popular pavilions on the 70-hectare site, as much for its design as for the unique NWT cultural experiences it offered within. It consistently rated among the top five “must-sees.”

Inside, visitors were welcomed by a 10-minute film called The Emerging North, which featured images and sounds from across the (pre-Nunavut) territories. Other features included the multi-media Landscapes exhibit which showcased the vast,and unique areas of the North. The Faces gallery featured portraits and quotes from northern individuals. A gift shop (stocked with northern made crafts) and Icicles restaurant, which served northern culinary delights – including drinks that clinked with ice carved from a chunk of a 10,000-year-old Arctic iceberg that was hauled down and installed within the pavilion – added to the experience and showed what the North is capable of.

During the six-month run of Expo 86, visitors were entertained by 300 performers and artists. The pavilion was staffed entirely by 140 northern residents and 300 volunteers. Many of these were young people from small communities who were experiencing life in southern Canada for the first time. It was their opportunity to brag about where they come from to visitors from around the world.

Roy Kaiser from Yellowknife, was 25 years old at the time. His job title at the pavilion was Information Guide Team Leader. Recently, he told me it was the best job he ever had, adding, “I will never forget that time.The experience of meeting people from all over the world and showcasing your home to everyone was part of what was so awesome.”

Wayne Bertrand was one of several northern musicians who performed in a band called Fair Play. “The NWT Pavilion was a true reflection of the North,” he says. “Our time at Expo 86 gave myself and my band mates a wonderful opportunity to meet other talented musicians and fantastic people from all over. The visit to the other Pavilions revealed the wonders of the other countries and their culture. Expo 86 has left me with many great memories.”

“That was the best job I ever had in my life. I will never forget that time.”

The Northwest Territories Pavilion had a lasting effect on many visitors, as well. Megan Leslie, of Coquitlam, B.C., says she made a special connection that opened up her understanding of  Canada.

“I was six years old during Expo and the NWT pavilion is one of my best memories, not because I remember the pavilion but, because of something it offered.

“I was able to sign up to be a pen pal with another child in the NWT. I was paired up with a girl from Baffin Island named Sarah Daitch. We wrote each other regularly for almost a decade,  losing contact when she moved to Calgary to pursue her passion for cross-country skiing (she was on the national team). I still have all her letters, 30 years later!”

And so, to remind people who were part of it what a proud time it was for the NWT, and to introduce the project to those under the age of 30, I’m curating an exhibit at Prince of Wales Northern Heritage Centre to commemorate the Northwest Territories Pavilion at Expo 86.

I need your help.

I would like to borrow artifacts, souvenirs, uniforms, photos, etc., that might be lurking in the back of a trunk, in a shed, or your garage… things you’ve stored for 30 years.

If you’ve got anything you think might be of interest, I can be reached at: unclebuck@theedge.ca