When I arrived in the North many years ago, one of the first things to strike me was the stories. Everyone I met told stories, and they were fascinating; tales of adventure and misadventure, love and hate, death and life. It took me a few years to notice however, that there were remarkably few published northern authors. Most of the tales that we regularly read about the North were written by southerners who dropped in occasionally to gather more fuel for their literary fires. Writers like Farley Mowat, Jack London and R.M. Patterson.

This was also obvious to Judith Drinnan, owner of Yellowknife’s only book store, The Book Cellar. In the early 2000s, she and Cait Sills of the NWT Literacy Council began organizing an annual Literary Breakfast, where people with an interest in writing and literacy could get together informally and talk about their love of books.

At one of these breakfasts, in September 2005, Judith, Cait, Richard Van Camp, Cathy Jewison, Doris McCann, and Jamie Bastedo sat around the table and came up with an idea: there should be a writers festival so that more northerners could get together to share ideas and develop their craft. “What we hoped for,” says Drinnan, “was a way to help engage people in writing their northern stories.”

In January of 2006, they met again more formally and began fundraising. Two northern organizations, De Beers Canada and the Tlicho Government came forward as major sponsors and, suddenly, it was happening. In August 2006, the first NorthWords Writers Festival took place. The evening gala happened to coincide with well-known northern author Rene Fumoleau’s 80th birthday, so the event closed with a rousing rendition of Happy Birthday and cake for all. Kathy Reichs and Rene Fumoleau in 2011.

For ten years now, NorthWords has thrived and grown, led by a board of volunteers and funded by the NWT Arts Council, GNWT’s Department of Education, Culture and Employment, and many northern businesses. De Beers remains the festival’s premier sponsor. Today, the festival is a four-day event that attracts some 1000 participants. Major writers from across Canada, including Joseph Boyden, Elizabeth Hay, Linden MacIntyre, Sharon Butala, Douglas Coupland, Kathy Reichs and Annabel Lyon, have attended and made long-lasting contributions through workshops, readings and panel discussions.

Fort Smith’s Richard Van Camp, one of the North’s best known authors, has always been a champion of the event. “NorthWords, for me, is a lighthouse for my own writing. It renews my northern spirit time and time again as I see our literary heroes from the south meet with our literary heroes from the north… It’s my touchstone throughout the year, to see if I’m on track with my own writing.”

Annelies Poole is a northern author, and for five years was also the executive director of NorthWords. Under her lead, the festival was able to expand to include workshops in Fort Smith in 2013 and 2014. Says Poole, “For me, NorthWords has always been about bringing out the northern voice: helping northern authors to tell northern stories from a northern perspective. One of the ways NorthWords does that is by linking northern writers with established southern Canadian writers. Something magic happens when writers get together. And we all get to take part in it at the festival by listening to great writers, both southern and northern.” Today, NorthWords is about participation. In Drinnan’s words: “Everyone who participates in the festival is helping to grow northern writing and literacy.” There is something for everyone: the De Beers Gala evening of readings and awards; “Blush,” a night of erotica, guaranteed to be a raucous full house; “Flash: Your 3 Minutes of Fame” for both aspiring and established writers; two barbeques, a book signing and, new this year, “Spark”, a young writers contest. Four days of panel discussions, mentorships, workshops and lunchtime readings are the nuts and bolts structure of the festival and are well attended and always highly praised.

This year’s tenth anniversary festival promises to be one to remember. For the first time ever, the keynote speaker at the literary luncheon on Sunday will be a northerner: Richard Van Camp, who is quickly becoming one of Canada’s most prolific and well-known authors. He’s the perfect example of what the festival organizers hoped for 10 years ago: a northern voice telling northern stories. He’s also one of the festival’s biggest supporters. Says Richard, “I love NorthWords and am so grateful to have watched it grow. It’s the perfect northern garden for the world to enjoy.”

For information on the schedule for the Festival which runs from Thursday May 28 till Sunday May 31, please go to www.northwordsnwt.ca . Information about volunteering at the festival is also available on the website. 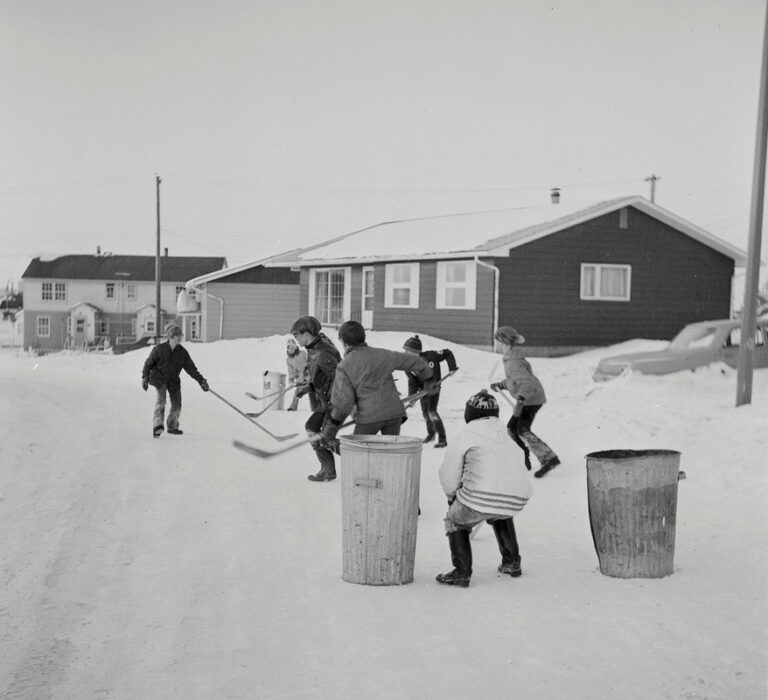 YK Past Blast: Garbage Can Goalposts